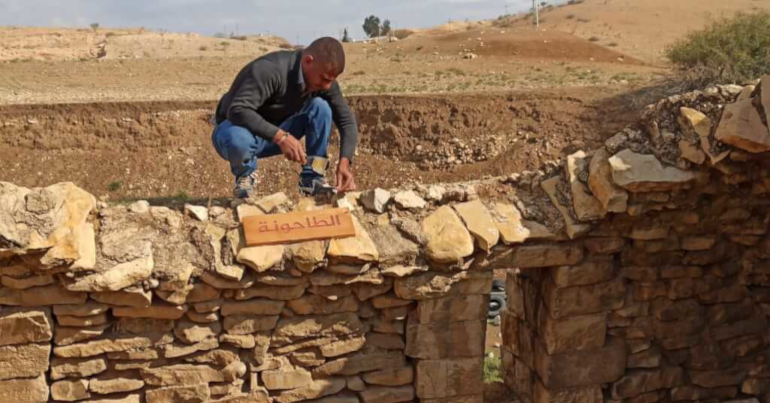 A Palestinian campaign group is calling for funds after Israeli forces confiscated its car.

The car was confiscated on 16 November, in Wadi Al Maleh in the northern Jordan Valley. The Jordan Valley makes up the eastern third of Palestine’s West Bank, along the border with Jordan.

Israeli forces have occupied the West Bank since 1967. The Israeli state sees the colonisation of the valley as a priority, through the establishment of Israeli ‘settlements’ and marginalisation of Palestinian communities. The Israeli state wants to control the border region and the fertile agricultural land of the Valley.

During Trump’s presidency, Israel had been planning to annex the Valley. These plans are shelved for the moment, but the Israeli state’s ethnic cleansing policies are continuing nonetheless.

Jordan Valley Solidarity (JVS) is a grassroots Palestinian-led campaign against Israel’s colonisation of the Valley. According to JVS:

Our aims are to protect Palestinian existence and the unique environment of the Jordan Valley by building international support and supporting communities on the ground.

This includes monitoring, recording and aiming to prevent the abuse of Palestinian human rights by the Israeli occupation and settlers.

On 16 November, JVS volunteers were helping to build a hiking trail in the Wadi Al-Maleh area. Wadi Al-Maleh is within an area which has experienced repeated home demolitions by Israeli forces, and where Palestinians are not allowed to build anything under the Israeli occupation’s discriminatory restrictions.

before the hiking trail is even opened, the occupation forces have tried to sabotage it. On 16th November they came to the area whilst volunteers were building a small wooden-framed hut for the visitor centre, detained them and demanded that they stop the building. They forced the coordinator of Jordan Valley Solidarity to drive his car to a nearby military base, where they confiscated the car and ordered him to attend Huwwara military base the following day.

On the same day, Israeli forces confiscated tractors from Palestinian farmers in the nearby community of Makhoul.

The Canary has received word from JVS that, despite the military’s attempts to thwart its efforts, the hiking trail is now complete, and a group of Palestinians came together last week to walk across the area.

We contacted Khudairy in December to ask him about what happened. He told us:

About my car,  well you know the story. This is how Israel harasses us and tries to prevent our activities and our projects in the Jordan Valley. Even if those projects are about arts, or culture or learning about the beauty of the Valley. This is how they try to stop us from doing anything in the Jordan Valley, But of course we will keep going and continue all of our projects, even if it is hard in this moment because I still don’t have a car.

JVS’ coordinators and volunteers have faced arrest and imprisonment by Israel before for their opposition to the Israeli occupation. One example is Rashed’s sister Sireen Khudairy, who is also part of JVS and has been arrested and imprisoned twice by occupation forces. The confiscation of Rashed’s car is part of an ongoing pattern of harassment.

JVS is fundraising to buy a new car, so it can continue its important work:

Without a vehicle Jordan Valley Solidarity cannot bring together and support the many local communities it works with throughout the whole area. Experience from when other vehicles have been seized from Palestinians indicates that the car is likely to be kept by the occupation forces for at least 1 -2 months.

We need your help to buy the campaign a new vehicle, so they can carry on supporting communities in the Jordan Valley.

JVS is part of a popular grassroots movement that challenges Israel’s colonial occupation of Palestine on a daily basis. Grassroots people’s movements like JVS are the only thing that stands in the way of Israeli colonisation. Right now they need our support more than ever.