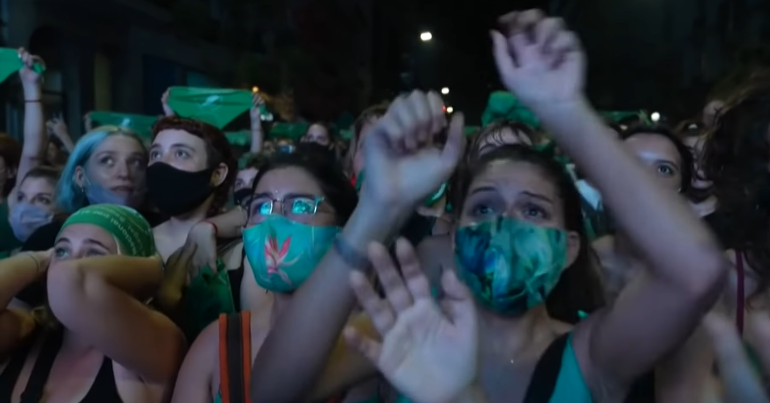 Argentina has legalised abortion, becoming only the fourth country in Latin America to fully do so.

The new law will allow abortions until the 14th week of pregnancy, where they were previously only allowed if the mother’s health was at risk or if she had been raped.

The Argentine Senate voted in favour of the bill at the end of December, after the lower house did the same earlier in the month. The bill was introduced by Argentine president Alberto Fernández, who celebrated the victory.

Reproductive rights campaigners took to the streets to welcome the news:

ARGENTINA HAS FREE, LEGAL AND SAFE ABORTION. after so many years of constant fight, today my country recognized women’s right to choose over our own bodies and to be able to interrupt pregnancy in safe conditions. this is such a huge step for women in argentina. ES LEY 💚 pic.twitter.com/4LoDD6Ii0B

The fight for legalisation

The road to this law has not been easy in Argentina, a Roman Catholic country. The Senate previously rejected a similar abortion bill in 2018.

Abortion laws across Latin America are strict, with many placing strict penalties on those who access them. In several countries in the region, abortions are not permitted under any circumstances, and can result in imprisonment.

More than 38,000 women have to go to hospital each year in Argentina because of problems with illegal procedures.

Hope for the future

Campaigners hope that Argentina’s decision will be echoed across Latin America. Activists in Chile, Colombia, and Brazil have petitioned their courts to loosen abortion laws.

Today Argentina has made an emblematic step forward in defending the rights of women, girls and people with reproductive capacity. It has also sent a strong message of hope to our entire continent: that we can change course against the criminalization of abortion and against clandestine abortions, which pose serious risks to the health and lives of millions of people. Both the law passed by the Argentine Congress today and the enormous effort of the women’s movement to achieve this are an inspiration to the Americas, and to the world.