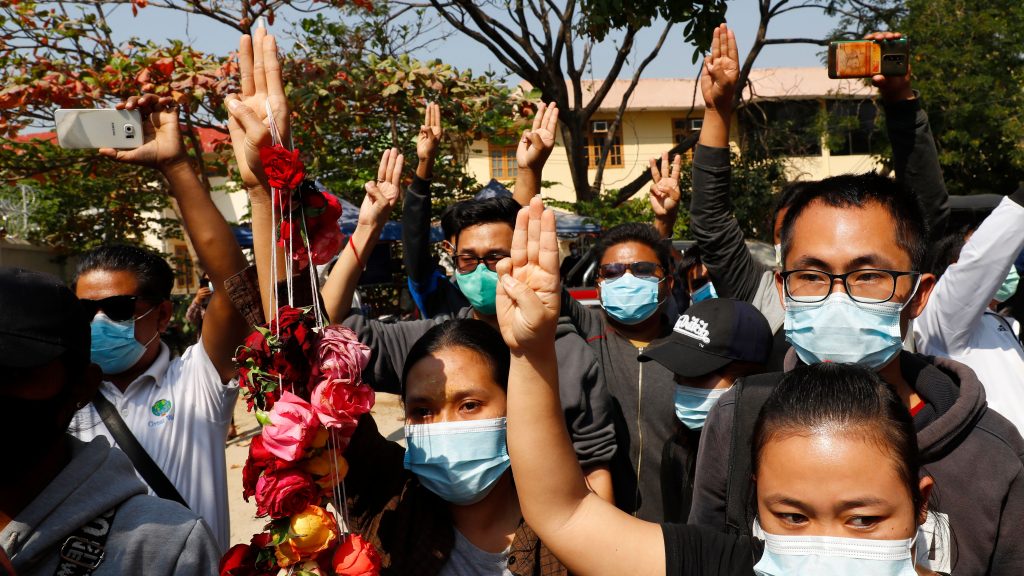 Military authorities in charge of Myanmar broadened a ban on social media following this week’s coup. They’ve shut down Twitter and Instagram, as residents in the nation’s biggest city again banged pots and plastic bottles to show their opposition to the army takeover.

It came as street protests continued to expand on Saturday 6 February. People gathered again to show their opposition to the army takeover.

Around 1,000 protesters marched on Saturday morning through the streets of Yangon, the country’s biggest city. Prominent among them were factory workers and students.

By noon, more than 100 police in riot gear had been deployed to block them from moving ahead. Members of the crowd shouted “Military dictatorship should fall” and “Down with dictatorship”.

In addition to Facebook and related apps, the military government on Friday 5 February ordered communications operators and internet service providers to cut access to Twitter and Instagram. The statement said people were trying to use both platforms to spread fake news.

In a statement, Twitter said it was “deeply concerned” about the order to block internet services in Myanmar. And it vowed to “advocate to end destructive government-led shutdowns”. A Twitter spokesperson said:

Telenor, a Norway-based telecoms company operating in Myanmar though a subsidiary, said it had complied with the order. But it also challenged “the necessity and proportionality of the directive”.

State media are heavily censored in the country. And Facebook in particular has become the main source of news and information. It’s also used to organise protests.

For the fourth night on Friday 5 February, noise from windows and balconies reverberated through the commercial capital of Yangon. It came as resistance to the coup and arrests of activists and politicians gathered steam.

They’d been scheduled to take their seats in a new session of parliament following November’s elections. That’s when the military announced it was taking power for a year.

Separately, Suu Kyi’s government has been charged with enabling the genocide and mass displacement of Myanmar’s Rohingya population. On 20 January the country filed objections to the case, which has been brought to the International Court of Justice.

The military accused Suu Kyi and her party of failing to act on its complaints that the election was fraudulent. Although the election commission said it had found no evidence to support the claims.

In New York, secretary general Antonio Guterres told a news conference it was “absolutely essential” to carry out the UN Security Council’s calls for a return to democracy, respect for the results of the November elections, and release of all people detained by the military, “which means the reversal of the coup that took place”.