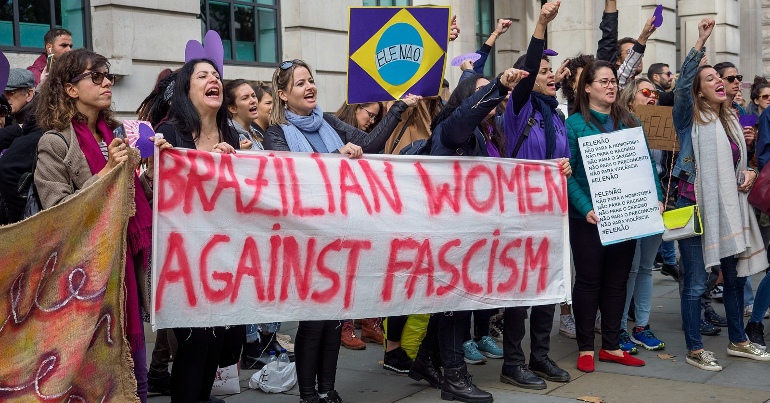 The Canary has consistently reported on the multiple crimes and abuses of the far-right government of Jair Bolsonaro in Brazil. Now, a short but devastating documentary film has summarized his government’s lowest points.

The documentary was produced by Redfish media, which is a subsidiary of Russian-state broadcaster RT. The film highlights issues such as declining living standards, growing corporate exploitation, and rampant privatization as endemic to Bolsonaro’s rule.

It also points to multiple parallels between what’s happening in Brazil and the experience of the UK under austerity. For instance, the film features interviews with people collecting food at foodbanks, many of whom can’t pay their bills because of falling living standards. One resident of Brazil’s notorious favelas (urban slums with poor infrastructure), meanwhile, lamented that there’s been “no dialogue between Bolsonaro and the LGBT population, women, [or] black people”.

Several of the film’s interviewees described Bolsonaro’s government as fascistic. The producers point out that Bolsonaro rose to power off the back of a parliamentary coup against his predecessor Dilma Rousseff in 2016. This is despite the fact that under Rousseff’s predecessor and mentor Luiz Inácio da Silva (known colloquially as “Lula”), Brazil grew to become a global powerhouse, lifting millions out of poverty in the process.

The documentary also points to a possible US role in preventing Lula from running for president during the election that Bolsonaro eventually won in 2018. As The Canary has previously reported, a group of prosecutors conspired to have Lula imprisoned on trumped up corruption charges that were subsequently found to be politically motivated. Leaked files also show that the prosecutors had engaged in unethical activity such as phone-tapping and illegal collaboration with US officials. In a final insult, after the election the lead prosecutor Sergio Moro was appointed to a major post in Bolsonaro’s government.

Several interviewees also called out Bolsonaro’s penchant for privatization. A leader of the National Street Dwellers Movement, for instance, said that under Bolsonaro public services including healthcare are at risk of privatization. He added that he’s seen growing numbers of homeless people across the country.

Others said that attacks on funding for education, and especially public universities, have been the key pillar of Bolsonaro’s privatization plans. Economist Esther Dweck said that this is all tied to Bolsonaro’s favoring of the private sector, which has entailed dismantling trade union bargaining power and implementing so-called flexible labor markets. Dweck added that far from leading to prosperity, Bolsonaro’s austerity policies have gone alongside a major recession.

Historian Rejane Hoeveler, meanwhile, pointed out that the re-imposition of neoliberalism is linked to the rise of neofascism across the globe. She singled out ‘Chicago boy’ Paulo Guedes, who Bolsonaro appointed as his economy minister, for criticism. Hoeveler said Guedes has pushed for both austerity and privatization. She added that in 2019, Bolsonaro announced plans to “privatize at least 17 state firms” including the postal service, the state electricity company, and subsidiaries of state oil company Petrobras.

She also alluded to ominous similarities between what’s happening now in Brazil and what happened in Chile in the 1970s during the murderous Pinochet dictatorship. As The Canary has previously argued, Bolsonaro is a representation of how neoliberalism is now entering a fascistic phase in its development, which ironically feeds off its own failures.

Continuing devastation of the Amazon

The film also investigates the damage caused to the Amazon by Bolsonaro’s government. It says that US companies have been major investors in development projects in the Amazon region. This includes US agro-industrial giant Cargill Inc, which built a new processing plant near one of the most rapidly deforesting sections of the Amazon. Another notorious US corporation, Monsanto (now a subsidiary of Bayer), has also reaped benefits from Bolsonaro’s rule. A farmer from the Landless Workers’ Agrarian Reform Settlement said that the company is “directly in conflict with small family farmers” in Brazil.

The documentary notes that Bolsonaro has boasted: “the world increasingly relies on Brazil to feed itself”. Yet Brazil’s exports have come at a terrible price. In a cruel irony, Brazilians are increasingly going hungry at just the time that more and more food is being exported abroad.

As The Canary previously reported, disaffection with Bolsonaro’s government is now reaching fever pitch. With mass mobilizations against his government taking place across the country, and with support from across the political spectrum, it looks like his days in office might be numbered. And Redfish’s documentary could be one more catalyst to bring his sordid government to a premature end.

Watch the documentary in full here.