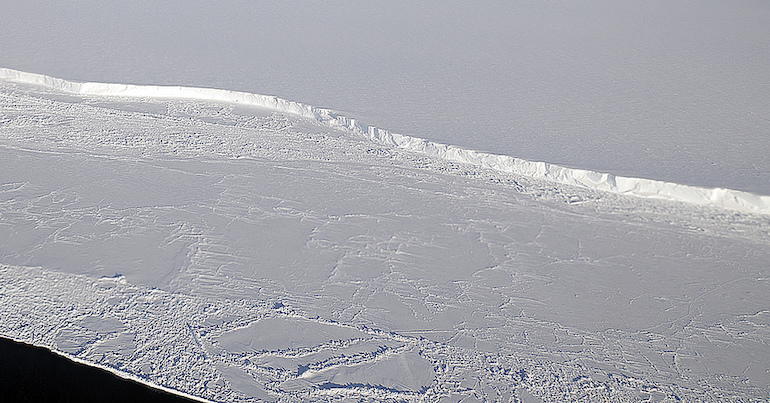 An iceberg nearly the size of Greater London has broken off the Antarctic ice shelf near a UK research station, the second such split in two years, researchers announced on 23 January.

The British Antarctic Survey (BAS) said the formation of the new iceberg in a natural process called “calving” was not due to climate change, which is accelerating the loss of sea ice in the Arctic and parts of Antarctica.

A similar spectacular separation, involving a 1,270-square-kilometre iceberg, occurred around a year ago.

“This calving event has been expected and is part of the natural behaviour of the Brunt Ice Shelf,” said BAS glaciologist Dominic Hodgson, adding:

It is not linked to climate change.

Climate scientist Ella Gilbert is part of BAS’ team working on the PolarRES project, which studies the current and future impacts of climate change on the Arctic and Antarctic regions. In a video, Gilbert explained more about the natural calving event:

The UK’s Halley VI Research Station monitors the state of the vast floating ice shelf daily but was unaffected by the latest rupture.

The mobile research base was relocated inland for safety reasons in 2016-2017 as cracks in the ice threatened to cut it off.

Although the calving event wasn’t due to climate change, Gilbert highlighted in the video that:

Earlier in January, scientists reported a record low in the extent of sea ice around Antarctica for that time of year. More recently, climate scientist Zack Labe highlighted that further daily record lows have occurred:

As Inside Climate News reported, scientists don’t yet know whether climate change is influencing the low level of sea ice. Some believe that wind patterns may be the main cause. Penn State geoscientist Richard Alley has also said that wind factors are important. However, even if that turns out to be the primary cause, the ice extent changes “must include the effects of global warming”, according to Alley, who explained:

We have changed the climate significantly, and everything happens within that changed climate

In another icy region, scientists say their new research has revealed indications of increasing average temperatures. Their analysis of Greenland ice cores extracted in 2011 shows that the northern island is 1.5C hotter than its average temperature in the 20th Century.

In other words, Greenland is experiencing its highest temperature for 1,000 years, according to the research. Glaciologist Maria Hoerhold, who was the lead author of the study on the subject published in Nature, said:

We have now a clear signature of global warming.