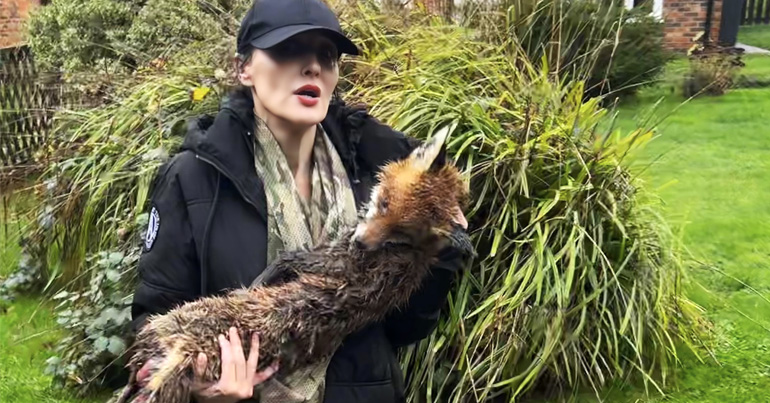 This article was updated on Wednesday 25 January to clarify additional raids beyond 18 January.

Officers from Kent Police executed warrants on properties across the county on 18 January in conjunction with the RSPCA (Royal Society for the Prevention of Cruelty to Animals). It’s believed the raids were connected to terriermen from the East Kent with West Street Hunt. And they came just days after saboteurs filmed the hunt’s hounds killing a fox.

‘Nothing prepared me for the brutality in fox hunting’

On 14 January, West Kent Hunt Saboteurs published a video showing members of its group wading into a pack of hounds and recovering the body of a fox. A saboteur lifts the body and shows the fox has been disembowelled. The footage clearly shows an intestine hanging out.

Working in wildlife rescue, I see a lot of tragic accidents and injuries, but nothing could of prepared me for the brutality involved in fox hunting.

[The fox] was still alive as the hounds pulled her intestines out. This isn’t a fast nip to the neck and a fast death, she died due to profound trauma by multiple dog bites.

The incident occurred while the West Kent Hunt Saboteurs were at a meet of the East Kent with West Street Hunt near Westmarsh. The group said that earlier the same day, huntsman Matthew Vater had ridden into its members with his horse. Footage it published on Facebook shows a saboteur trying to back away as a rider repeatedly attempts to knock into them with his horse.

Just a few days later, on 18 January, the sab group was back out with the same hunt when it posted:

Terriermen are people that join hunts with the task of digging out a fox if they ‘go to ground’, i.e., hide in a hole. As the Crown Prosecution Service itself makes clear, there is “no real role for terriermen” in legal forms of hunting.

It turned out that the West Kent Hunt Saboteurs’ post was the first public news of what is likely the biggest anti-hunting operation carried out by police to date.

Armed raids across the country

On 20 January, local paper KentOnline reported that police, in conjunction with the RSPCA, had arrested four men for alleged wildlife and animal welfare offences. The arrests took place following raids on homes in Canterbury and near Folkestone during the morning of 18 January. In addition to the arrests, police also recovered a total of ten terriers and lurchers. The dogs were then placed into care with the RSPCA. KentOnline quoted an RSPCA spokesperson saying Kent Police also seized “other supporting evidence”.

Then, on 22 January, ITV News reported that the raids in Kent were, in fact, not the only warrants police had executed on 18 January. “Armed raids” at dawn were:

simultaneously conducted by police and RSPCA officers across the country, both at hunt kennels and homes belonging to those who use dogs for hunting.

Led by the animal welfare charity and supported by police from Kent, Norfolk, Sussex and Thames Valley, six men have been questioned by police and 22 dogs seized and removed from where they had been living.

ITV News understands that those questioned by police are suspected to be involved in terrier work for fox hunts.

The article described the co-ordinated raids as the “largest ever criminal investigation in the UK associated with fox hunting”. And, crucially, it said that the “other supporting evidence” previously mentioned by the RSPCA included mobile phones.

As anti-hunting organisation Protect the Wild detailed, police found a trove of damning messages on the phone. These included messages sent on the same day that he was arrested stating that he’d “found a brace” of foxes, with one going to ground. Further messages dating back up to two years before his arrest contained further evidence of illegal hunting. Protect the Wild pointed out that the messages:

show clearly what hunt staff will openly brag about when they think they’re having a private conversation.

What made Finnegan’s case unique is that it’s the first time phone messages led to a conviction of a huntsman under the Hunting Act. And it may have opened the floodgates for legal cases against hunts.

The seizure of similar devices by Kent and other police on 18 January is a significant move against hunting. The investigation has only just opened, so we don’t yet know what if anything police will find on the phones. However, as reporter Rupert Evelyn (who wrote the ITV News article on the England-wide raids on terriermen) said, mobile phones:

have proved to be very effective evidence storage devices.

After hounds from the East Kent with West Street Hunt allegedly killed a fox on 14 January, West Kent Hunt Saboteurs suggested that terriermen may have played a role. As Protect the Wild reported, the sab group said the hunt’s terriermen were near the hounds as they attacked the fox. That is despite the terriermen having been absent for much of the day. The sab group suggested the terriermen may have released a ‘bagged fox’, which is literally when members of a hunt release a fox from a bag for the sake of hunting.

Police raids couldn’t have come at a worse time for the East Kent with West Street Hunt. West Kent Hunt Saboteurs said on 22 January that:

We can’t wait to learn what was on their phones!

And neither can we at the Canary.