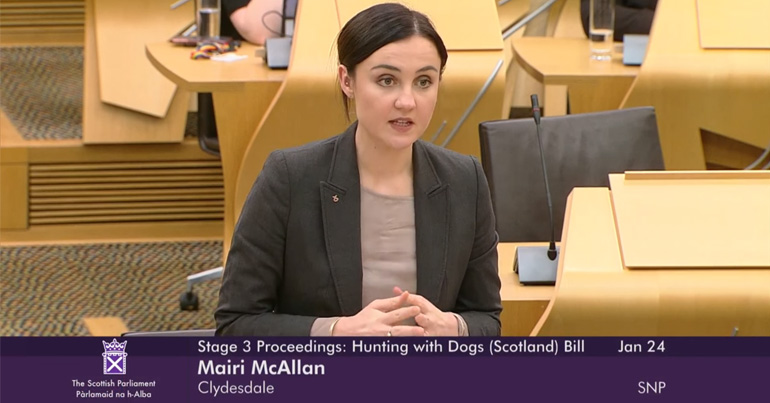 The Scottish government has passed the Hunting With Dogs (Scotland) Act. It’s a new anti-hunting law that seeks to fix the mistakes of existing legislation. So, for the first time anywhere in the UK it looks like it may end hunting, particularly fox hunting, as we know it.

The end of hunting?

On 24 January, MSPs voted on and passed the Hunting with Dogs (Scotland) Bill. The bill replaces the existing Protection of Wild Mammals (Scotland) Act 2002 with new legislation that explicitly seeks to:

close loopholes… that have allowed the practice of illegal hunting to continue.

Its passage comes more than six years after the Lord Bonomy review described the Protection of Wild Mammals Act as “unduly complicated” and stated that it led to illegal hunting continuing. The bill passed with 90 MSPs voting in favour and 30 against. Unsurprisingly, only Tories voted against it:

Shows how out of touch the Scottish Tories are, much like their English counterparts. pic.twitter.com/Mc9ub3ikZE

The law will affect 10 fox hunts and one mink hunt based in Scotland. It will also affect hunts from elsewhere that travel to Scotland for joint meets. There is no word yet on when the legislation will come into force.

The new law’s primary intention is to end hunting with packs of hounds, which is fundamental to traditional forms of hunting with these dogs. Instead, it places a limit of two hounds in most circumstances. The other key legislation in the bill is that it outlaws so-called ‘trail hunting’ completely. Trail hunting has taken root as a smokescreen for illegal hunting across England and Wales due to loopholes in those nations’ hunting legislation, the Hunting Act.

This Bill represents a significant step forward in protecting Scotland’s wildlife from the cruel and senseless practice of illegal hunting.

I am pleased that the Parliament has agreed on a new law which will close the door on the illegal chasing and killing of mammals once and for all.

Other Scottish wildlife organisations also welcomed the news. The League Against Cruel Sports Scotland said in a press release that the passing of the Hunting with Dogs (Scotland) Bill is a “landmark moment”. OneKind echoed this comment, while the Scottish Society for the Prevention of Cruelty to Animals (SSPCA) said the news was “fantastic”.

Not everybody was happy with the outcome, of course. Jake Swindells of the Scottish Countryside Alliance, which functions as a lobby group for the hunting industry in Scotland, said the new law is “unjustified and unnecessary”.

As various organisations have highlighted, the new law creates an exception to the two-dog limit through a licensing scheme. Glasgow Hunt Sabs pointed out that this 14-day license is available once every six months, which would make it difficult to exploit. However, the two-dog limit itself, while contrary to traditional hunting with hounds, also doesn’t necessarily mean hunting can’t continue. Staghound packs in the southwest of England regularly use pairs of hounds in relay to chase and hunt deer. OneKind also highlighted the inclusion of a falconry exemption, enabling up to two dogs to flush an animal to a bird of prey. Some hunts in England exploit this loophole in the Hunting Act to continue hunting, although the two-dog limit will make this more difficult for Scottish hunts.

However, as the chair of the HSA pointed out, if hunts do try and exploit the new law, sabs will still try to stop them:

Whatever happens sabs will be there

The passage of the Hunting with Dogs (Scotland) Bill is an important moment. Traditional hunting with hounds as it has been practiced for hundreds of years will finish. Only time will reveal exactly how exactly the law plays out in the fields. However, it now places pressure on Westminster to follow suit and tie up myriad loopholes in the Hunting Act, including outlawing the sham of trail hunting.