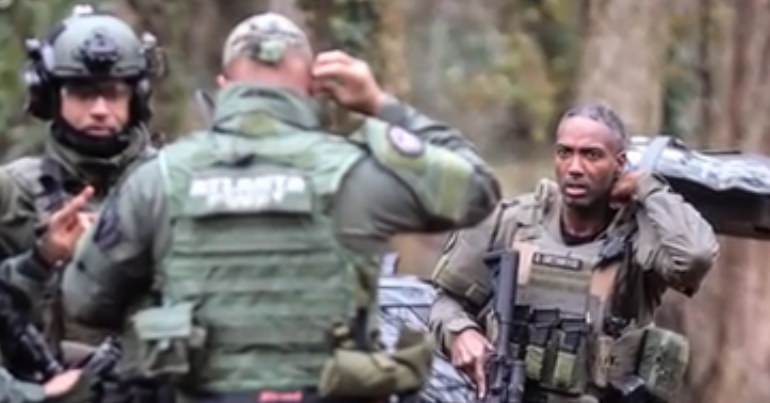 This article was updated on Wednesday 26 January to add information on the Atlanta protest.

Last week, police in Atlanta shot and killed a protester against the police department’s plans to turn 300 acres of forest into a police training compound, known as the ‘Cop City’. Defend the Atlanta Forest wrote:

On January 18, in the course of their latest militarized raid on the forest, police in Atlanta shot and killed a person. This is only the most recent of a series of violent police retaliations against the movement.

26-year-old Manuel Teran – also known as Tortuguita – was shot during a raid on the Atlanta forest protection camp on Wednesday 18 January.

A witness reported hearing a series of 10 to 12 gunshots and then a loud boom as police raided the camp.

A press release from the Atlanta Community Press Collective said:

Since June 6, 2022, activists and community members fighting to Defend the Atlanta Forest and Stop Cop City have been demanding that officers stop bringing weapons into the forest after APD pointed their weapons at peaceful protestors.

The police are reporting that they were fired on by protesters, but this is denied by the campaigners.

The Defend the Atlanta Forest campaign tweeted out a quote from Tortuguita, where they talked about the threat of state violence against them as a person of colour. Tortuguita said that they refused to let the fear of state violence stop them from resisting:

“Am I scared of the state? Pretty silly not to be. I’m a brown person. I might be killed by the police for existing in certain spaces. [But] fear is the mind killer … you can’t let the fear stop you from doing things, from living, from existing, from resisting.”
– Tortuguita pic.twitter.com/RodTldwQGT

Tortuguita’s death has sparked solidarity actions across the US:

On Saturday, supporters of the movement to #StopCopCity in Tucson, AZ marched to a Bank of America, a major funder of the Atlanta Police Foundation, and hung a banner stating "B-of-A Funds ATL's Murderous Cops / Stop Cop City."

The solidarity protests have been met by police violence and repression:

An angry protest took place in Atlanta – demonstrators smashed the windows of a corporate funder of the Cop City project. A report on Anarchist news site Its Going Down described the scene when the protest arrived at the Atlanta Police Foundation’s premises:

the raucous crowed arrived at 191 Peachtree Street, the building housing the Atlanta Police Foundation. Rocks flew, smashing into the front of the building, as marchers smashed out even more windows. Fireworks lit the scene up. A cop car left unattended in the area was smashed, while another caught fire.

The Defend the Atlanta Forest campaign has issued a statement – signed by hundreds of groups and individuals – explaining the importance of protecting the forest. It reads:

Forests are the lungs of planet Earth. The destruction of forests affects all of us. So do the gentrification and police violence that the bulldozing of Weelaunee Forest would facilitate. What is happening in Atlanta is not a local issue.

The statement explains how the training centre will only lead to more violence and repression in society:

Replacing a forest with a police training center will only create a more violently policed society, in which taxpayer resources enrich police and weapons companies rather than addressing social needs. Mass incarceration and police militarization have failed to bring down crime or improve conditions for poor and working-class communities.

The campaigners say that increasing police budgets comes at great expense to society:

In Atlanta and across the US, investment in police budgets comes at the expense of access to food, education, childcare, and healthcare, of affordable and stable housing, of parks and public spaces, of transit and the free movement of people, of economic stability for the many. Concentrating resources in the hands of police serves to defend the extreme accumulation of wealth and power by corporations and the very rich.

What do cops do with their increased budgets and their carte blanche from politicians? They kill people, every single day. They incarcerate and traumatize schoolchildren, parents, loved ones who are simply struggling to survive. We must not settle for a society organized recklessly upon the values of violence, racism, greed, and careless indifference to life.

The statement ends with a call to support the campaign:

The forest defenders are trying to create a better world for all of us. We owe it to the people of Atlanta and to future generations everywhere to support them.

Here are some ways that the Defend Atlanta Forest Campaign has suggested to support them:

You can donate towards funeral expenses for Tortuguita here.