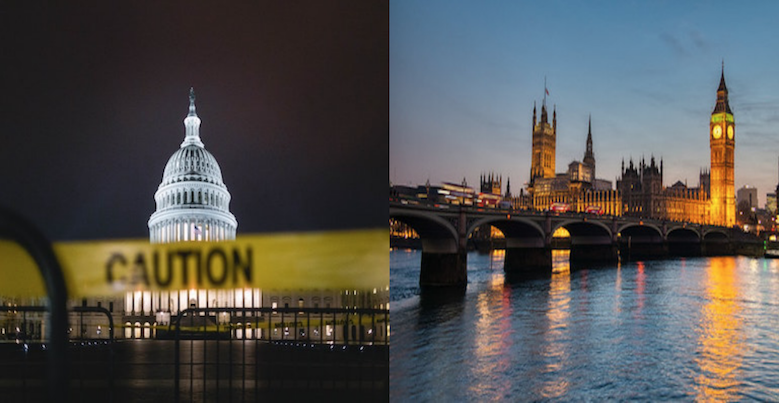 The storming of the Capitol in the US by a white supremacist mob, egged on by the white supremacist-in-chief Donald J. Trump, has rightly seen calls for concern around the state of US democracy. However, some of these concerns also have legitimacy closer to home in the UK.

Some threats to democracy are far more subtle and insidious than recent events in Washington, D.C. As part of our #factofthematter series, The Canary has been monitoring policy reviews and changes of electoral processes in the UK. As we’ve already covered, the Committee on Standards in Public Life (CSPL) is currently reviewing the financial regulation capabilities of the Electoral Commission. The Commission is also under review by the Public Administration and Constitutional Affairs Committee (PACAC).

These reviews, while presented with much political jargon, are very important for the work of free and fair elections.

The CSPL has recently turned its attention to the importance of the Nolan principles to maintaining public trust and understanding in politics. The principles are a guideline in the ministerial code and involve:

In a recent blog post, the chair of the CSPL lord Jonathan Evans outlined that the Nolan principles are a guideline for public life and contribute to maintaining high standards of integrity:

Imagine a democracy without ethical standards. A political system where there are free elections, but where those elected make decisions solely in the interests of their supporters or paymasters; where public funds are systematically diverted to private purses; or where policy is sold to the highest bidder. Such a corrupt system is not democracy in any real sense. Democracy means more than just an elected dictatorship.

But political cronyism has seen just that – government contracts handed out without tender, ministers’ friends benefiting from their associations, and peerages handed out to associates.

The Canary spoke with campaign group Unlock Democracy’s director Tom Brake, who cited problems with enforcement of the Nolan principles:

If the principles are difficult to enforce, their use must be questioned. Brake continued:

Enforcement of the Nolan Principles doesn’t currently rest with an independent regulator. Instead, the principles are an ethical code of practice which governments can choose to comply with or not.

The structure of the UK Parliament makes this issue more complex. In his blog post, Evans claims that standards of behaviour are important but:

it’s more complex for those in elected office who owe their positions to the democratic choice of their electors. (And I suppose I should add that it is even more complex for Members of the House of Lords like me who are neither employed nor elected, but let us not stray into that particular thicket!)

Well, let us stray into that particular thicket.

The House of Lords is the second chamber of UK parliament and features unelected officials who gain entry by appointment. The tail end of 2020 saw renewed criticism of Boris Johnson with accusations of ‘chumocracy’. Analysis from the Guardian found that:

Almost a quarter of peerages awarded this year have been to Conservative party donors, close associates or former colleagues of Boris Johnson

Brake told The Canary that:

We are now unique in the world in terms of having a second chamber that legislates that is unelected, and it continues to grow. It’s now bursting with people placed there. Most recently, as you’ll know, someone placed there who the Prime Minster was advised not to put forward, but chose to anyway. We have a House of Lords which is bursting to the seams with people who have supported the different political parties and is an anachronism that most people think should have been dealt with 50 or 100 years ago – if the storming of the Capitol portrayed a negative impression of US democracy, then I’m afraid that the House of Lords continues to do the same for UK democracy.

The Nolan Principles could be useful standards for ensuring fairness in the UK electoral system. But, as Brake argues, more work is necessary to ensure a robust democracy in the UK.

The Canary has been following the CSPL’s review of the Electoral Commission (EC), and has seen that several campaign groups laid out their concerns in the public consultation.

The laws creating the Electoral Commission were written in the pre digital age and a time of different campaigning norms. Campaigning innovations incubated in the USA are now commonplace in the UK. Regulation must evolve to meet them.

For example, we live in the era of ‘permanent campaigns’, with political parties advertising on social media all year round. As a result the current rules narrowly defining election periods and corresponding spending limits are outdated. They should be replaced with per-annum spending limits, with fresh spending limits imposed again once an election has been called.

ORG and Fair Vote UK support the creation of a body – the Office for Election Integrity – that would coordinate the work of the relevant regulators. It is clear from the elections of recent years that not only do the responsibilities of several regulators overlap in this space, no single regulator can currently sufficiently regulate it.

Such a suggestion is indicative of the growing calls to give more investigatory and regulatory power to the EC. The Brexit Referendum from 2016 and the 2017 and 2019 general elections were all beset with allegations of disinformation.

The Conservative position on the EC, however, is somewhat different, as Brakes argued:

Now the EC may well need reform that equips it to deal with digital campaigning. But nonetheless, any threat to its independence is grave. Indeed, Brakes warned:

If we needed any evidence of the need for there to be a very strong, impartial, independent body able to oversee our elections we can go across the pond and see what’s happened in the US where what we may need in the UK in the future, and I hope this isn’t the case, but what we may need is an independent body like the Electoral Commission that can…provide evidence that our elections are fair and have been conducted properly, because that is clearly the Electoral Commission’s role.

An EC spokesperson told The Canary:

As the regulator of political finance, the Commission’s role is to provide assurance that there is a level playing field for all parties and campaigners, and that political finance is transparent and consistent with the law. Our independence is paramount to this work and to ensuring fairness, trust and confidence in our democratic processes.

The EC’s full response to the public consultation can be found here. Its spokesperson did emphasise that it was open to reform in view of a commitment to democracy:

The functions of the Commission are vital to the integrity and transparency of elections.

We are always open to feedback from our stakeholders and keen to build and maintain trust and confidence. We are receptive to change, including where reforms can deliver greater oversight and scrutiny of the Commission on behalf of parliaments and voters, while maintaining our independence.

Democracy as a tool

These campaign groups and their current work reveal much about the state of democracy in the UK. Independence and reform of the EC, according to campaign groups, are vital to a free and fair democracy that works for all. Let’s hope the Tories don’t get in the way of that.