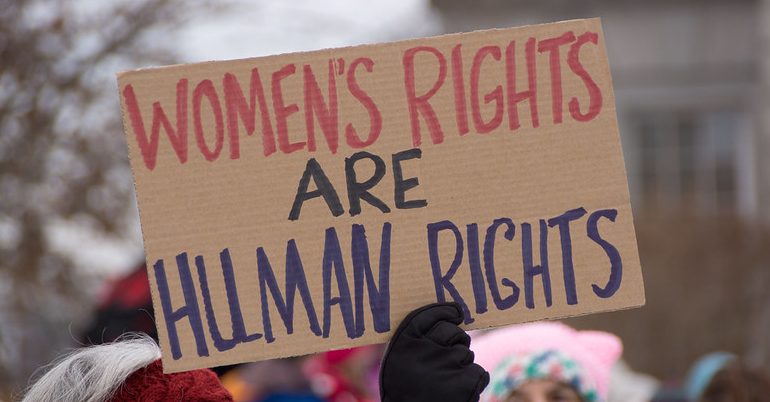 As part of the #OurLivesOurStories series, The Canary has spoken to the Northern Ireland Human Rights Commission (NIHRC) after it launched legal proceedings against the devolved government over a failure to fund abortion services.

Following pressure by the United Nations (UN) in 2019, the government in the north of Ireland decriminalised abortions. With new services set to be brought in by March 2020.

Before 2019, an abortion in the north of Ireland was only allowed to take place if there was a severe physical or mental risk to a woman’s health.

The Abortion Act which was introduced by Westminster in England, Scotland and Wales was never extended to the north of Ireland, leaving women with few options:

Despite the law changing, the Stormont Executive and Department of Health have not funded these services. Now the NIHRC is taking legal action against them.

The Law as it stands

Since March 2020, abortions have been legal in the north of Ireland by a registered doctor, nurse or midwife, during the first 12 weeks’ gestation. Where there is a risk to physical or mental health in the opinion of two registered medical professionals, abortions are legal up to 24 weeks.

The new law, which is called the Executive Formation Act (NI) 2019, required the secretary of state for Northern Ireland to implement the UN’s recommendations in full, meaning that women in Northern Ireland would have the same abortion rights as those introduced by Westminster to the rest of the UK in 1967.

Currently, terminations with ‘no gestational limit’ are legal in cases where there is an immediate necessity to save a life or to prevent permanent injury to the physical or mental health of a woman.

‘Grave and systematic’ violation of rights

In 2018 the UN released a full report with recommendations after the Committee on the Elimination of Discrimination against Women (CEDAW) found the conditions in Northern Ireland were described as ‘torture’.

The situation in Northern Ireland constitutes violence against women that may amount to torture or cruel, inhuman or degrading treatment…

Denial of abortion and criminalization of abortion amounts to discrimination against women because it is a denial of a service that only women need. And it puts women in horrific situations.

A legal case has been filed

The NIHRC believes that the failure of the Executive and Department of Health to agree to fund and commission these services breaches the European Convention on Human Rights.

The NIHRC told The Canary that judicial review proceedings have been filed in the High Court and are awaiting consideration.

The secretary of state for Northern Ireland has a statutory requirement under the NI (Executive Formation) Act 2019 to ensure that the recommendations of the CEDAW committee are implemented: namely that women have access to free and safe abortions in Northern Ireland.

The NIHRC told The Canary:

Following pre-action correspondence, the Commission decided on 30 November 2020 to initiate legal action against the Secretary of State, NI Executive and Department of Health for Northern Ireland for the failure to commission and fund abortion services in Northern Ireland.

The commission is deeply concerned at the lack of commissioned and funded abortion serviced in Northern Ireland leading to a vacuum for many women and girls seeking such services.

One health and care trust has now ceased to provide services leaving women and girls to travel to England, elsewhere in Ireland and pay for a service or to use unregulated services.

While some services that were already running in Northern Ireland have continued to, the NIHRC told us that they believe these services are running with limited resources.

‘We still receive calls daily from women who are confused’

One in three women and people who can get pregnant will have at least one abortion in their lifetime; many will have more. In 2020/21 we have witnessed one of the most compelling periods in the history of abortion rights, access and provision in Northern Ireland.

When speaking to us, Alliance4Choice highlighted that although some counselling services are provided by Northern Ireland facilities under sexual and reproductive health charity Informing Choices, there is a lack of information and access available.

Now that there are clinics providing Early Medical Abortion (EMA) up to 9 weeks and 6 days, much of the direct provision of pills bridging work we had to do from mid-march 2020 is still ongoing.

We still receive daily calls from women who are confused, have been misdirected or have already been to the clinic and want to talk to someone whilst they are in the process of the second stage and are unable to access in-person support. Counselling services are provided by Informing Choices NI, but there is a lack of information anywhere on the Department of Health websites.

Cut off from UK services

Due to coronavirus travel restrictions, women and girls who would otherwise have been able to use services in other parts of the UK have been left cut off and without access to healthcare.

This violates several human rights, and the NIHRC has stated that Stormont has breached the European human rights act.

The decision of women and girls to make choices about continuing a pregnancy falls within the scope of Article 8 – the right to respect for family and private life:

There shall be no interference by a public authority with the exercise of this right except such as is in accordance with the law and is necessary in a democratic society in the interests of national security, public safety or the economy well-being of the country, for the prevention of disorder or crime, for the protection of health or morals, or for the protection of the rights and freedom of others.

NIHRC Chief Commissioner Les Allamby released a statement reminding the government that these services are critical to women and girls:

We are deeply disappointed that we are yet again having to take legal action. Our focus is to ensure that human rights are upheld and the law passed in Westminster is implemented in practice. We must never forget this is about a critical health service for women.

However, since releasing that statement in 2018, there has been a growing timeline documenting a failure to provide these vital services.

A timeline of abandonment

During the coronavirus (Covid-19) lockdown alone, concerns about the failure to implement services recommended by the UN and by EU and Irish and UK legislation have been raised:

As the NIHRC campaigners in the north of Ireland wait for a court date, this ongoing battle to safeguard women’s and girls’ rights continues.

A spokesperson from The Department for Health of Northern Ireland told The Canary:

As the matter is under consideration by the court it would be inappropriate for the department to comment further.

The Executive Office told The Canary:

The Secretary of State was also contacted but was unable to comment at the time of publication.

If you or someone you know needs access or advice about abortion services in Northern Ireland, these resources are available: