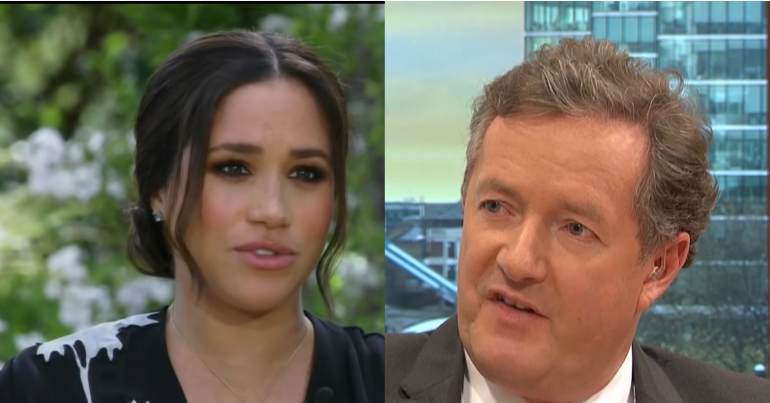 Beresford was expressing his sympathy for the couple and the negative press they’ve endured. He said:

I think that we need to all take a step back. And I understand that you don’t like Meghan Markle. You’ve made it so clear a number of times on this programme – a number of times. And I understand that you’ve got a personal relationship with Meghan Markle, or had one, and she cut you off. She’s entitled to cut you off if she wants to. Has she said anything about you since she cut you off? I don’t think she has, but yet you continue to trash her-

At this point, Piers got up and walked out of the studio, declaring himself “done with this”. Beresford, in disbelief, said:

Do you know what, that’s pathetic… This is absolutely diabolical behaviour. I’m sorry, but Piers spouts off on a regular basis and we all have to sit there and listen. Six thirty to seven o’clock yesterday was incredibly hard to watch.

So @alexberesfordTV defends Meghan on @gmb and criticises @piersmorgan for what he’d said about Meghan’s mental health.
Piers walks off the set.
Surely Piers knows if you give it, you gotta be able to take it?pic.twitter.com/gmoNjMxiQy

He never called you diabolical until you walked off like a petulant child and that’s when he called your behaviour and absolutely rightfully “diabolical” because it was!

You are happy to sit there and spout off but when someone gives it you back.. you run off in the corner!

Morgan has frequently criticised Markle since her engagement to Harry, to the point of some calling it an “obsession”. After the couple’s revealing interview with Oprah Winfrey aired, he continued the onslaught, saying:

I expect all this vile destructive self-serving nonsense from Meghan Markle – but for Harry to let her take down his family and the Monarchy like this is shameful.

Markle admitted in the interview that her treatment by the royal family had at points led to suicidal thoughts. She also said a member of the family asked how ‘dark’ her son Archie’s skin would be.

Morgan later suggested on GMB that the question wasn’t racist, and was told by Trisha Goddard:

I’m sorry Piers, you don’t get to call out what is and isn’t racism against Black people. Call out all the other stuff you want, but leave the racism stuff to us.

Regardless of your stance on Harry & Meghan, Piers Morgan who invites guests to sit there whilst he shouts over them, storming off the set after receiving a bit of criticism is pathetic.

Piers Morgan walked off, just because he had to listen to the slightest scrutiny of his actions, but he also screams his head off because Harry & Meghan left the royal family after relentless abuse from the press & mistreatment from the family. Pathetic old Piers is at it again. https://t.co/Dk7D8yehy2

Markle has also experienced constant criticism from the British press. The Daily Mail has already run several critical pieces about the interview. She recently won a privacy case against the Mail on Sunday and MailOnline after they published a letter she sent to her father.

The constant targeted attacks on Markle by the UK media have been deemed racist by many, and Mogan’s obsession with her has only furthered this media climate.

Privilege on display! @piersmorgan spends hours trashing Megan a young lady, whose only crime was fall in love with Harry & he can’t take 30 secs of gentle rebuke! We don’t have the privilege of only hearing about race, deciding it’s ‘too much’ and ‘be done with this’. Shameful!! https://t.co/lBIybaxT4a