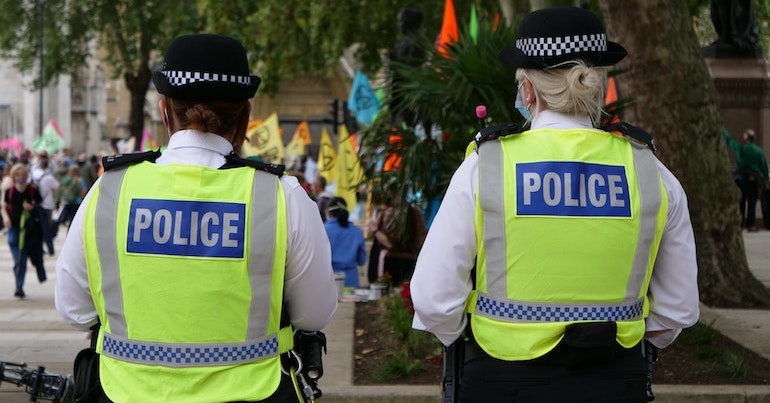 Counter-terror strategies in the UK have come under lots of scrutiny for racist and Islamophobic policies.

The Canary sent out a number of Freedom of Information (FOI) requests to police forces around the country. We wanted information on how many premises were searched with a warrant in relation to terrorism investigations.

What did we get back?

Nothing. The Metropolitan Police, Warwickshire Police, and Leicestershire Police all returned the same response: they can neither confirm nor deny if they hold this information.

As part of our #ResistBigBrother series, we’ve been investigating how counter-terror strategies are made clear to the public.

In these quarterly statistics you can find information on how many people have been stopped and searched under terrorism laws – and how many convictions come from this.

However, in these statistics there’s one glaring gap. There isn’t any publicly available information on how many people have had their homes raided under suspicion of terrorist activity. This means there’s also nothing on how many arrests or convictions come from these raids.

As The Canary previously reported, this can have a huge toll on families. One Muslim family told us:

We have been subjected to abuse and attacks from our neighbours and the local community, not to mention that it was all over the news. What the news failed to mention is that the raid did not amount to anything. Our brother has been unjustly defamed and wants to get on with his life, but this stigma will follow him for the rest of his life. The deep fear and anxiety that this has caused the entire family will not just disappear overnight.

There must be accountability for how these raids are conducted, their effectiveness and damage to community relations.

These raids also help maintain the narrative of suspect communities against Muslims and sustain the constant onslaught on our collective freedoms through new laws and policies.

Why didn’t the police forces tell us what information they hold?

Each of the police forces to whom we sent an FOI cited security concerns.

The public are entitled to know how public funds are spent and by confirming or denying that this information is held would allow the public to see where money is being spent and know that forces are doing as much as they can to combat terrorism.

To confirm or deny that this information is held would disclose MPS [Metropolitan Police Service] practices used, thereby exposing operational procedures and investigative protocols. Information relating to investigative tactics and protocol will rarely be disclosed under the Act and only where there is a strong public interest consideration favouring disclosure.

Leicestershire and Warwickshire Police both had the exact same response, saying:

The security of the country is of paramount importance and the police will not divulge any information, if held, that would place the safety of an individual at risk or undermine national security.

Is there a security threat?

Of course, to some degree, we can understand that police forces can’t release information to the public that might lead to ongoing cases being disrupted. But we weren’t asking for specific details.

We asked how many premises were forcibly entered for the purposes of conducting a search warrant. We also asked how many arrests came from these raids. This doesn’t require names or locations – and moreover, there is public interest here.

Counter-terror strategies have a history of racist and Islamophobic measures. Instances like this, where the police are not forthcoming about strategies, are a cause for concern.

The Canary spoke to the director of the Islamic Human Rights Commission Massoud Shadjareh. He explained how and why these security concerns in counter-terror inflame a complex situation.

So many homes have been searched and nothing is found. This is not a security issue, what we need to highlight is whether these sort of searches are actually done proportionally or disproportionately. These disproportionate actions of police on anti terrorism are actually counterproductive.

Shadjareh took the position that citing security concerns is a dangerous precedent to set:

Unfortunately, the secrecy around this, it seems to be not for protection of our safety and security. But it’s for the protection of misconduct by officers, which unfortunately happens very often. And the more you wrap up all these procedures in secrecy, the more likely that this sort of thing happens. I’m not suggesting every officer or every security person is corrupt but it creates that culture.

This culture then becomes harder to challenge:

Once that culture is created, then it will be implemented, and there is no one to challenge it. And unfortunately, this is where we are.

Alarmingly, Shadjareh explains how he was also stopped and searched. Officers stopped him, incredulous as it may seem, while he was on his way to discuss stop and search measures with police:

I myself, was stopped. And I actually was sitting on the Accountability Board of schedule seven, which is the highest level, I had to sign the Official Secrets Act, to be able to sit on that committee, and then I was stopped, targeted. My complaint was that either I’m not trustworthy, and I have possible terrorist inclinations, or whatever, in which case I shouldn’t be sitting there. Or if I’m sitting there, then, you know, obviously, I shouldn’t be targeted in that way. And for two and a half hours, which they kept me that occasion.

Schedule 7 gives port officers the authority to search individuals at ports and airports if they suspect terrorist activity. It’s part of yet more regressive counter-terror strategy.

A lack of transparency on search warrants is a prominent issue. However, it’s also set against a backdrop of counter-terror policing that relies on a culture of suspicion. This includes Schedule 7, but also Prevent, CONTEST, and more.

Counter-terror strategies rely on cultures of suspicion that view Muslims as internal enemies. As Shadjareh explains:

When you look at the recent reports by the government, that institutional racism does not exist when everybody knows it does. When I say everybody does [I mean] victims know it, you might find that white middle class person doesn’t know it exists, because they never experienced it. And I understand that, and so they are living on misconceptions and they are not facing the realities of what’s going on. And that is actually very dangerous, because then it creates one group of people who their reality is that they face racism day in day out, being unleashed by the police, and authorities, and then another group for people because they don’t receive the same treatment, they actually think everything is hunky dory.

And that creates a division in society, which then pits communities against communities. And instead of addressing this, the government is actually using and is nurturing these perceptions, and that’s very dangerous, because that actually creates these divisions in the society

Muslims who must live under the suspicion created by counter-terror strategies are left vulnerable. By refusing transparency on their methods, counter-terror police are cultivating a theatre of war. The uncertainty of raids and their apparent ineffectiveness is the point. The methods described here have been purposely chosen to form a hostile environment for Muslims.