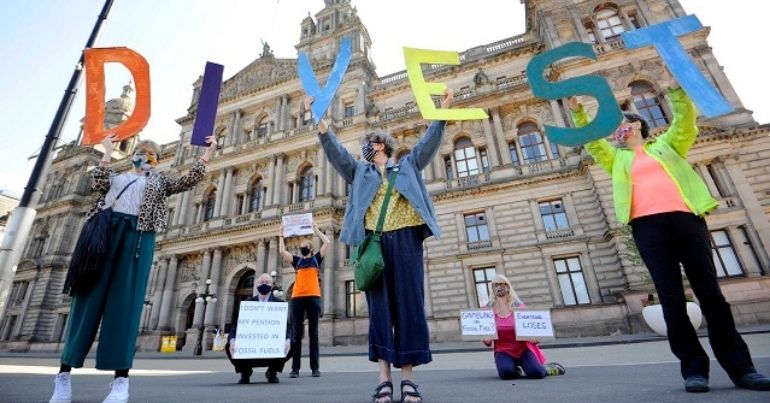 The Strathclyde Pension Fund Committee has announced that it’ll no longer invest in firms that don’t meet environmental standards. Its announcement came as a result of a call from Glasgow City Council. This pension fund has around 250,000 members and is worth £24bn. The Council is the fund’s largest employer member.

Councillors supported the idea of divestment from fossil fuel companies in principle. However they did not discuss what standards they would use to decide on who would be divested from, and on what timeline divestment would happen. Therefore they have a lot work to do ahead of the next meeting in September.

We now need councillors to ensure that the pension fund divests from climate-wrecking fossil fuels.

The Strathclyde Pension Fund Committee will make a definitive decision at a meeting in September. That meeting takes place just weeks before the UN Climate Change Conference of the Parties (COP26) in Glasgow between 1 and 12 November 2021.

will bring parties together to accelerate action towards the goals of the Paris Agreement and the UN Framework Convention on Climate Change.

That’s assuming the Paris accord is even sufficient to limit global warming. Because the Intergovernmental Panel on Climate Change (IPCC) has concluded that it might not be. But COP26 continues:

The UK is committed to working with all countries and joining forces with civil society, companies and people on the frontline of climate change to inspire climate action ahead of COP26.

Given the aims of this upcoming conference, FOE Scotland is calling for:

strong climate standards and a clear timeline to be agreed in the coming months to ensure that divestment from coal, oil and gas producers will happen.

Campaigners claim that the pension fund “is the joint largest local government fund in the UK”. And an FoE Scotland study:

On 26 May, the Guardian reported that both Exxon and Chevron “suffered shareholder rebellions from climate activists and disgruntled institutional investors over their failure to set a strategy for a low-carbon future”.

The article reported that “dissident hedge fund activists” managed to oust two Exxon board members. They then replaced them with their own candidates to force the oil giants to follow “a greener strategy”. This could be particularly pertinent given the contribution of oil companies to the climate crisis.

As one of Europe’s largest pension funds any move by the Strathclyde Pension Fund would be historic, but the issue remains unresolved.

A decision on if they will stop investing in fossil fuels must now take place at a crunch meeting of the Strathclyde Pension Fund Committee in September if they are to agree to divest before the UN climate talks COP26.

The burning of fossil fuels is the biggest driver of the climate crisis, yet fossil fuel companies are still working to increase their production of oil and gas. Last week a Dutch court ordered oil giant Shell to immediately drastically reduce its climate emissions. The company’s activities and plans were judged not to be in line with the Paris Climate Agreement.

Pressure for action to end the production of fossil fuels is increasing as Glasgow prepares to host the crucial UN climate summit this November. Calls for divestment have come from fund members, trade unions, local and national politicians.

FoE Scotland concluded that the Pension Fund Committee’s will to enact change is a key issue:

In April, Glasgow City Councillors voted by a majority of 69 votes to 4 in support of divesting the pension fund from fossil fuels, but only the Pension Fund Committee is competent to enact divestment from fossil fuels.

Featured image via – Friends of the Earth Scotland