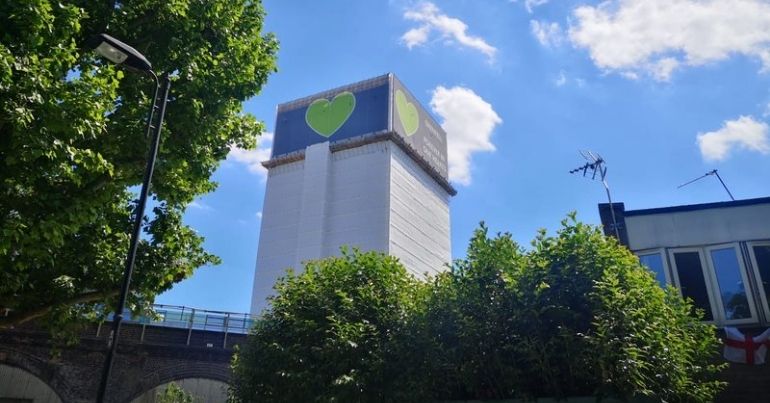 Campaign group Palestine Action has occupied the company that provided flammable Grenfell cladding on the fourth anniversary of the tragedy.

Demonstrators have attempted to shut down Arconic, which provided the cladding for Grenfell Tower. The group is also protesting the company selling materials to Israel for fighter jets.

This protest happened as people remember the 72 lives lost in the Grenfell Tower fire on 14 June 2017. Survivors and campaigners are still calling for justice four years later.

BREAKING: We're currently occupying Arconic — The company who provided lethal cladding for the Grenfell Tower and materials for Israel's fighter jets. Today, on the Grenfell anniversary, we seek #JusticeforGrenfell. pic.twitter.com/LcBD3TDP1j

Members of Palestine Action protested at the Arconic building in Birmingham. They barricaded doors, smashed windows and sprayed red paint all over the building.

Activists held up a Palestine flag from the roof. One activist has been arrested, while others are still there.

In a statement, Palestine Action said:

The same companies which fuel repression and war crimes committed against the Palestinian people are producing, operating and selling in the UK – and doing so with a consistent disregard for the deaths and suffering inflicted by their products.

These companies have no place in civilised society. While the government refuses to seek justice for the victims of their crimes, Palestine Action will continue to escalate direct action which shuts down the operational bases of these criminal firms.

Arconic provided the flammable cladding on Grenfell Tower. The public inquiry has since heard that the company knew about the fire risk and continued to sell the cladding.

One of the company’s senior US executives was also ‘probably’ told the cladding should not be used on buildings above 12m. Grenfell Tower was 67m tall.

Arconic also manufactured parts for Lockheed Martin’s F-35 fighter jet. This jet has been used by Israel’s military against Palestinians.

Regarding Palestine Action’s protest, a spokesperson for Arconic said:

We are aware that a small number of protestors have gathered at our Kitts Green site in Birmingham.

Police are on site and we are supporting them to ensure the safety of both the protestors and our colleagues who work there.

We are also very much aware that this is the fourth anniversary of the Grenfell Tower fire, and would mention that our thoughts are with those affected by the tragedy. We continue to cooperate with and support the relevant investigations.

Survivors are still fighting for justice for the Grenfell fire today. No criminal charges have been brought while the inquiry is ongoing.

Millions of people are living in buildings found to be unsafe, with similar flammable cladding. In many cases, remediation costs are being passed to residents – leaving them with huge costs.

One estimate said it would be 2043 before the needed remediation work was finished, a figure which does not include buildings shorter than 18m.

Speaking today, the rapper Lowkey highlighted that one of the major shareholders in Arconic, Elliot Advisors UK, has made donations of nearly £25,000 to Boris Johnson and the Conservatives.

Today we are on the fourth anniversary of the fire at Grenfell Tower. … The first phase of the inquiry, the recommendations, which were not applied by Boris Johnson, clearly stated… that the PE Reynobond cladding from Arconic was the main promoter of fire across the building. Today Palestine Action have shut down a factory belonging to Arconic in Birmingham.

We have to also think about austerity and the role it played in the fire service’s ability to respond.

The person responsible for those cuts was the mayor of London, Boris Johnson. If you would call to the inquiry figures like Eric Pickles, why wouldn’t you call the current serving prime minister?