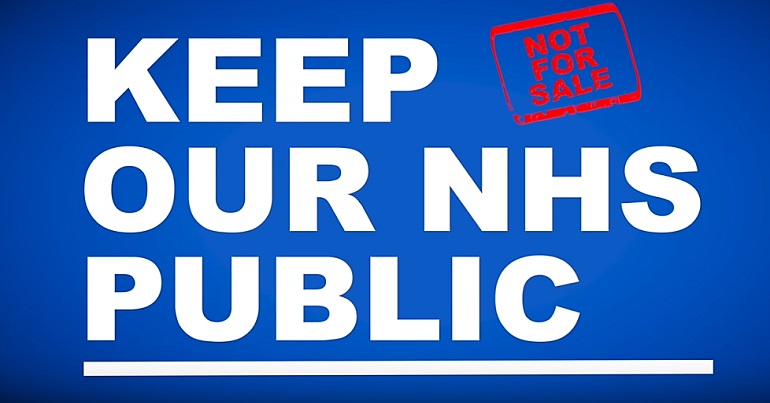 A 2018 video has emerged that shows Tory-appointed peer Dido Harding talking with Alexander Nix about data-sharing. Nix was CEO of disgraced data mining company Cambridge Analytica (CA). The conversation appears to have taken place when Harding was chair of NHS Improvement.

But at time when a massive NHS data-sharing project is due to be launched, the video is a timely reminder of the dangers and vested interests involved in data-sharing.

At the beginning of the video Harding shows her interest in data-sharing, including health data:

But why is this old video now of interest? Because the NHS is currently engaged in a massive data sharing project, known as General Practice Data for Planning and Research. Its launch is now delayed by some months following privacy concerns.

What’s extraordinary is that it’s Cambridge Analytica’s Nix that points out that in UK we require OPT-IN consent to share people’s data.

Which is precisely what #NHSDataGrab is not doing. That requires OPT-OUT consent. For more, read this:https://t.co/UVgr6ya7Vf

Neither the British Medical Association nor the Royal College of GPs endorses the project. There are also concerns that this “data grab” will mostly benefit the private sector. A coalition of five groups and an MP have recently begun legal proceedings against the government’s project.

How this data-grab works

The Canary’s Steve Topple reported that an article in Byline Times explained how the project will enable NHS Digital:

to take the following from GPs’ records: “Data about diagnoses, symptoms, observations, test results, medications, allergies, immunisations, referrals, recalls and appointments, including information about physical, mental and sexual health.” This will also include data about “staff who have treated patients”, and data “on sex, ethnicity and sexual orientation”, as well as other sensitive data.

NHS Digital will also be able to pass on personal data to:

It was just a few weeks after Harding’s discussion with Nix that Channel 4 News ran a series of exclusive reports on CA. The broadcaster then followed that up with evidence that CA had exploited social media data to micro-target voters in multiple US election campaigns.

In January 2019, openDemocracy published an article revealing how Nix boasted about CA organising a number of voter suppression campaigns. And in October 2020, Channel 4 News revealed how US-wide voter data helped ensure that Black voters stayed home during the 2016 US elections.

As The Canary previously reported, there are also links between CA and Strategic Communications Laboratories (parent body of CA) and the Conservative Party:

🔍 Here's a photograph of the Chairman of the board of SCL Group, which The Times and The Guardian have reported as being the 'parent company' of Cambridge Analytica, campaigning alongside former Tory leader David Cameron. #PMQs pic.twitter.com/Pfx2GZRVIh

SCL president Geoffrey Pattie was a Conservative MP until 1997. As journalist Liam O’Hare explained for Bella Caledonia, Pattie was:

The Canary previously reported on another NHS data-sharing project, known as the datastore project, powered by Palantir’s software. Palantir also has links to CA:

Dawn Butler – You say people are very enthusiastic to give away their NHS data… are you aware that Palantir & Faculty have links to the discredited Cambridge Analytica?

Matt Hancock – I don't think I'm aware of that, no pic.twitter.com/rggzhkR5ua

The project has access to a range of data sources. Controversially, datasets include “racial or ethnic data”, “political affiliations, religious or similar beliefs”, “criminal offences, proceedings and sentences”, and data on “physical or mental health conditions”.

CA/AIQ whistleblower Christopher Wylie told Britain’s MPs that Palantir had had several meetings with Nix. And “senior Palantir employees” subsequently worked on data that CA had harvested. It’s also reported that, in 2013, UK-based Palantir employee Alfredas Chmieliauskas worked with CA. He had access to the now infamous 50m+ Facebook users’ data (that figure has since risen to around 87m).

It should also be noted that Palantir worked for UK intelligence. It was awarded contracts to handle vast data sets on UK citizens for British spy agency GCHQ. Palantir was also part used for a GCHQ project that sought to improve the agency’s ability to collect “tweets, blog posts, and news articles”.

Harding faced a different data scandal while she was CEO of TalkTalk. During her tenure between 400,000 and 4.2m customer records were stolen. Despite this, Harding subsequently went on to head the disastrous coronavirus (Covid-19) Test, Track and Trace programme.

The main Test and Trace contracts were with Serco and Sitel.

While CA or SCL are no more, data privacy issues remain very much of concern. And many of the political players linked to CA/SCL are still in power.

The last thing the NHS needs is a data hack far greater than that experienced by TalkTalk. Or input from a multinational company whose history is more about surveillance.

As for Harding, she now hopes to be head of NHS England.