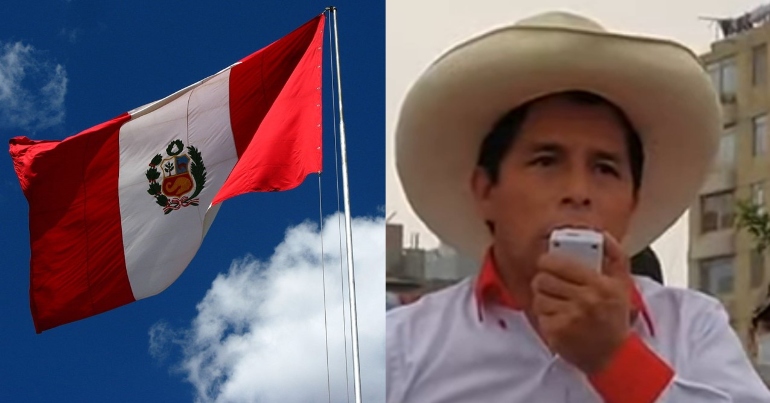 After a series of short-term presidents following the resignation of scandal-plagued then-president Pedro Pablo Kuczynski in March 2018, Peruvians went to the polls this month to elect a new leader. The race is very tight with just 0.3% separating the two candidates. But the frontrunner, a socialist newcomer, now looks all but certain to win. And that opens the possibility of an exciting new future for a country ravaged by years of corruption, human rights abuses, and neoliberalism.

A razor-thin margin, but a clear victor nonetheless

On 6 June, Peru held a run-off election to choose its next president. According to Peruvian electoral law, a run-off is held between the two leading candidates if no one candidate reaches over 50% in the first presidential poll. In a crowded race, Pedro Castillo of the socialist Free Peru party topped the first poll with 19%, while hard-right candidate Keiko Fujimori came second with 13.4%. This sparked a second election in which Castillo continued his lead throughout the race. Fujimori did slowly begin to close the gap as the race went on, but the results currently show a razor-thin victory of 50.1% for Castillo to 49.8% for Fujimori.

Fujimori is now disputing the vote and claiming that there are “signs of fraud” that taint the outcome. On 12 June, she led a protest in Lima, the South American nation’s capital city, calling for the annulment of 200,000 ballots that she claims are fraudulent. The country’s electoral body has rejected the request, a decision supported by the Organization of American States (OAS). Though an unrelated recount is currently in process, it’s reportedly unlikely to alter the result. Moreover, international observers have said there is no evidence of fraud and deemed the election clean.

A stark difference in both style and substance

The difference between the two leading candidates could not be starker. Castillo was very much the underdog from the beginning.  An elementary school teacher and union leader from an impoverished provincial village, he is largely portrayed as a firebrand leftist outsider. Fujimori, on the other hand, is an archetypal political insider with decades of political experience. She previously served as a member of Peru’s legislature from 2006 to 2011 and unsuccessfully ran for the presidency in 2011 and 2016. In addition to most of the media backing her, Fujimori had the support of some of the country’s major public figures, including former presidential candidate Mario Vargas Llosa.

She is also the daughter of former president Alberto Fujimori, who led Peru between 1990 and 2000. Widely considered a dictator, during his time in office the senior Fujomori suspended the constitution and at times ruled by decree. He is currently serving a 25-year prison sentence for multiple crimes committed throughout his presidency. In addition to widespread corruption, he was also convicted of multiple human rights abuses. This included extrajudicial killings and kidnappings (carried out by the secretive state-sanctioned death squad ‘Grupo Colina’), the forced sterilization of hundreds of thousands of people, and illegal use of search and seizure.

An opportunity to break from the neoliberal mould

As president, Fujimori also imposed a ruthless neoliberal economic program on Peru, supported by then-US president George Bush. Known as ‘Fujishock’, his economic policies were largely in line with the International Monetary Fund-engineered Washington Consensus. A few years into Fujimori’s presidency, the New York Times described ‘Fujishock’ as “Latin America’s most radical privatization program” and reported how his government “auction[ed] off virtually all its state-owned companies over the next two years — including oil, electric, telephone, and mining companies”.

Castillo’s victory, therefore, represents not just a mandate for his socialist platform, but also a decisive rejection of the Fujimori legacy. Unsurprisingly, the junior Fujimori has been trying to tar him by associating his political ideas with those of controversial governments elsewhere in the region such as that of Venezuela. One pro-Fujimori political advertisement read: “Do you want to live in Cuba?” She has even claimed that an “international left” conspired to have Castillo elected, pointing to early recognition of his victory by Argentina and Bolivia, which both currently have left-of-center governments.

Voters reject both facile smears and corruption of the status quo

However, the smears appear not to have paid off. In addition to winning the overall vote in spite of majority media opposition, Castillo achieved whopping margins of victories in some of the areas that were most severely affected by Peru’s internal armed conflict between the state and the leftist Shining Path guerrilla movement, which took place between 1980 and 2000. His victory seems also to owe considerably to voters’ disillusionment with the corruption and political instability that has blighted the country over the past few years. Writing in the Guardian, Latin America expert Tony Wood wrote:

Since 2018, the country has had two presidents impeached and removed on charges of corruption and one hounded from office by a surge of protests. The sleaze and dysfunction of the established parties was one of the factors that enabled Castillo’s shock breakthrough in the first round of voting in April.

Of the two candidates, it’s Fujimori who is by far the more closely associated with corruption. She is widely seen as a close political ally of the senior Fujimori and even became his official ‘First Lady’ at the age of just 19 after her mother blew the whistle on some of her husband’s corrupt dealings. Like her father, she was herself jailed on corruption charges for 13 months, though was later released following a 4-3 vote by the country’s Constitutional Tribunal. With her third attempt at winning the presidency, meanwhile, Fujimori has had more than just the election to lose. She is currently again facing corruption charges, the trial for which would have been delayed until the end of her term had she been elected.

Prospect of an exciting new future

Suffering from the coronavirus (Covid-19) pandemic has also been attributed as a factor in Castillo’s favor. Peru holds the dubious distinction of having the highest coronavirus mortality rate per capita in the world. As a result, a key pillar of Castillo’s platform is providing healthcare as a human right and establishing programs to reduce poverty and inequality. His other policy proposals include nationalizing key industries, reversing neoliberal economic policies, holding a referendum on whether to draft a new constitution, and agricultural reforms that would favor small landholders rather than giant agro-industrial corporations.

With his victory seeming now all but certain, Castillo represents an exciting new era for Peru. And as the region of the world that has perhaps suffered more than any other from US-backed neoliberalism, Latin America needs bold, progressive leaders like him to lead its people out of the dark days of the Washington Consensus.