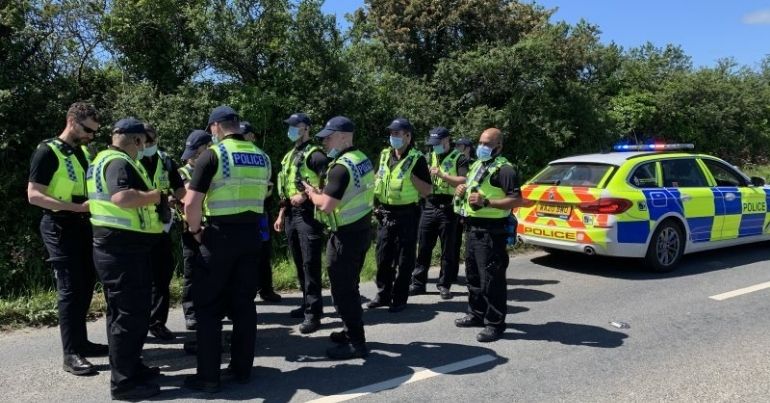 Cornwall residents are speaking out about how the G7 coming to the region left them feeling “stranded” by police presence and restrictions.

As the G7 summit descended on Cornwall over the weekend, tight measures were put in place, including extra police, ID checks, and movement restrictions.

One resident, Susan*, told The Canary that her and her family have felt “threatened” and restricted by the summit’s effect on their home.

Speaking on 12 June as the summit was ongoing, she said:

I don’t live in the zone with all of the movement restrictions, closures, two forms of ID requirements, police escorts to work and six foot steel girders but my family do and the massive police presence is inescapable through the county – every car park I’ve seen recently from beaches to supermarkets has had at least two police cars stationed in it.

Thousands of police officers arrived from across the country for the G7 which took place between 11-13 June, with the combined numbers totalling around 6,500.

Susan said the police presence in Cornwall is usually quite small, and that she found their sudden ubiquity “deeply unsettling and threatening”. She added:

it has been made clear the police presence is not for the safety of the local people.

As well as the police presence, areas around Cornwall were restricted during the summit. Businesses and roads were closed, as well as some rail and bus services.

Due to the road closures, the Tesco Superstore in St. Ives was only accessible by foot. As the only big supermarket in St. Ives, Susan said this has made things difficult for residents.

A neighbour of my family has been left in tears due to not being able to get to a supermarket with her three children due to the closures and has ‘accepted she’s going to starve for two weeks’.

My mum, who is disabled, has not been able to get to the supermarket as it closed to vehicle traffic and she cannot get there on foot.

She ordered a food delivery box from a subscription service and received an email stating the delivery had been cancelled due to drivers being unable to reach the area, so she has been left essentially stranded.

According to Devon & Cornwall Police’s timeline, most restrictions ended on 13 or 14 June. However, in Falmouth, roads, car parks and Event Square will have to wait until later in the week.

As well as the inconvenience, Susan and many others in Cornwall have been particularly upset about the money spent on hosting the G7. Susan said:

I think in essence the expense and restrictions feel like a kick in the teeth after the struggle of the pandemic. The whole summit seemed painfully ignorant of the socioeconomic and environmental issues present in Cornwall.

As of September 2019, 17 Cornwall neighbourhoods were among the most deprived 10% in England.

Local campaigners and charities have emphasised that the region suffers from inequality and child poverty that the prime minister ‘doesn’t see’.

Devon & Cornwall Police were contacted for comment, but had not responded at the time of publication.

Meanwhile, homeless people housed in hotels were removed to make way for a combination of tourists and the G7.

The Resist G7 Coalition, a collection of groups who protested the summit, said:

We always said that it was going to be the G7 that was going to disrupt Cornish communities, not protesters, and it’s heart-breaking to hear the real life impact this has had.

£70m has been wasted on a policing operation, homeless people have been chucked out of hotels to make way for police. Cornwall is one of the poorest regions in Europe. 36% of children live in poverty in the area where G7 leaders stayed in their swanky hotels that are well out of the price range of locals.