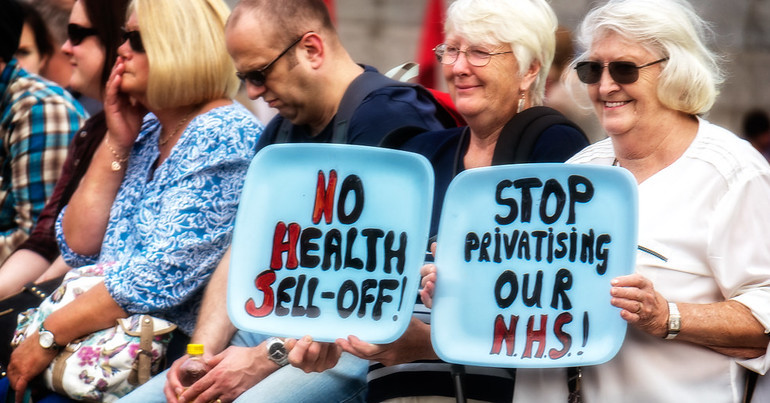 11:50 17 July 2021 – This article was amended to include a response from the Department for Health and Social Care (DHSC)

The Health and Care Bill from the Department for Health and Social Care (DHSC) is coming in for criticism from campaigners. The bill has hit headlines recently with worries about privatisation and contracts available without tender. However, there’s a lot more to worry about here.

As part of The Canary’s #followthemoney series, our investigative unit has been monitoring how NHS services are already partly run by private companies. These companies are one of the many examples that show parts of the NHS are already up for profit.

The Health and Care Bill is under criticism from campaigners who worry about what looks like a major upheaval of the NHS.

What does the bill set out?

The bill had its second reading in Parliament on 14 July and, like many white papers, it’s a long and complex document.

The DHSC told The Canary:

The Health and Care Bill builds on the NHS’ own proposals for reform and sets out the next steps in building a health and care system that delivers better care for our communities. It will be less bureaucratic, more accountable, and more integrated in the wake of the pandemic.

As ministers said in Parliament, Integrated Care Boards will be NHS bodies, run by, and accountable to, the NHS. Any suggestion that the Bill will dilute the principle of ‘equitable free care for everybody’ is simply not true.

However, The Canary spoke to a number of anti-privatisation campaigners who can explain the details of this bill. Pascale Robinson of We Own It told us:

This bill is hugely dangerous for our NHS. And many have argued that it will be the end of the NHS as we know it, because they are changing NHS structures in so many ways.

Dr Julia Patterson of campaigning group Every Doctor explained one central aspect of the Health and Care Bill – the setting up of Integrated Care Systems (ICS) – as particularly troubling:

The way that this bill is restructuring the NHS is that it’s setting up things called integrated care boards in local areas who previously have held responsibility for the care of their local populations. And those care boards are going to be able to help private companies and members from private companies will be able to sit on the boards, they will be handling public money and making decisions about how that money is spent.

The danger with the expansion of ICS across the country is the risk of private companies sitting on local health boards. As Patterson explains, this risks involvement of private businesses on NHS boards:

Robinson told us that this has already started happening:

That is already happening, the likes of Virgin Care and Medvivo have been welcomed onto one board in Bath and North East Somerset, and they are already influencing governance.

Dr. John Lister of Keep Our NHS Public points out to us that the number of ICS units has dropped dramatically. Instead of having local commissioning boards for the NHS, the new proposals see boundaries of localities redrawn:

At the last count, there’s 106, they’ve been merging together into bigger and bigger groupings, because there’s only going to be 42 integrated care systems under this bill.

For example, says Lister, one ICS

spans coast to coast in the North of England, 3.2 million people. It’s absolutely enormous. God knows how many boroughs and country boundaries, all in one ICS. Now the idea that that can be given any kind of weight to local opinion, community views, and particularly areas within there, it’s just laughable, that won’t happen. Because all the decisions, eventually going to be taken by people are a long way away and don’t really give a damn what your position is, wherever you might be in the north

In centralising governance from previously local areas into the proposed larger boundaries, the bill sets the stage for a risk of accessibility issues for patients. Having ICS boards oversee huge parts of the country could compromise patient safety. Access to complaints procedures for patients is also on shaky ground.

However, there’s another dimension to the Health and Care Bill. Lister told The Canary that the bill could give more power to the health secretary than every before:

I think there’s massive extra powers are being given to the health secretary in this bill… I don’t think they fully grasp the extent to which if they bring it under their control, they’re going to be then accountable for everything that goes wrong.

If decisions must go through the health secretary, then an already bloated system could be further clogged:

Now just imagine, up and down the country, all the different hospitals and trusts and so on, with various plans, all of them then having to send every detail proposal to the health secretary and hang on till he’s come back with an answer.

Indeed, Patterson told us that this central control of the NHS carries grave concerns:

The bill talks about removing bureaucracy within the NHS process. in reality, that means the removal of checks and balances at a local level, which are really important in terms of proper transparency and accountability within the service, which currently is run by experts.

Javid’s recent appointment as secretary of state for health has seen concerns that his first major action in his new role will be controversial. Patterson states:

We’re concerned because the Secretary of State for Health and Social Care doesn’t have a health background himself. And yet, this bill looks like it will offer him more power to exert authority within the NHS.

Of course, this all comes in the context of a devastating pandemic that many experts believe has been severely mishandled. The strain NHS staff are under has been clear to see. Patterson, whose organisation Every Doctor highlights NHS staff concerns, told The Canary:

A lot of frontline staff have had a significant real terms pay cut over the last 10 or 11 years now. Many nurses have about a 20% pay cut, senior doctors have had up to a 30% pay cut over the last 11 years. Conditions get more and more stressful in NHS workplaces. Because as staff leave and because they retire early, or they move abroad, or they change career because the pressure on them is simply unbearable. Those remaining have an even more stressful time in their workplaces, because they’re shouldering even more responsibility and stress. And so doctors are already feeling under an unbelievable strain.

With a third wave of the pandemic looming, this Health and Care Bill brings in upheaval at a time of instability.

Amongst the concerns about privatisation, increased political control, and a lack of medical experts leading the NHS – there’s more. Lister argues that the bill uses vague language and rhetoric that is itself a cause for concern:

Nobody’s explained the case for it… what it is they want to achieve, nobody’s spelled out any tangible benefits from these ICS at all. It’s only rhetorical stuff about partnerships and working together and so on. Well, if you believe that you’ll believe anything.

We think the whole thing has to be scrapped. We feel that as we come out of this pandemic, we should be having hopeful, bold, ambitious thinking about what we want for our society. In our view that means reimagining the NHS in the way it was originally constructed to be. That’s a service which provides equitable free care for everybody, regardless of your background, your situation, how unwell you are. That’s simply not going to be delivered by this bill.

There is so much anger about what this bill will hold. We need to build resistance over the summer and do our best to make sure that this bill is withdrawn, and if not the absolute worst aspects need to be fought in Parliament

There is still time to stop the bill. However, as we can see, the worrying elements of the bill are numerous and complex. Once again, this is another change coming from Westminster which requires difficult and consistent activism.