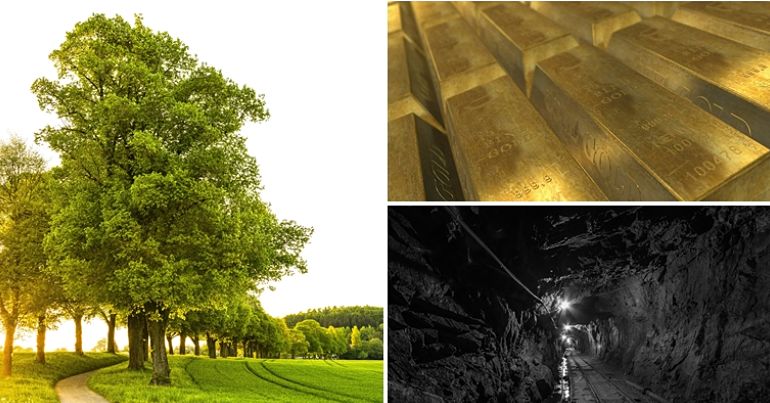 Dalradian Gold Ltd has been working and drilling in the Sperrin mountains of County Tyrone since 2009 under prospecting licences. And in 2017, it applied for a licence to mine for gold in this area. It claims:

the project is currently moving through the planning process and as it’s 100% carbon neutral from day one, it will be the first of its kind in Europe

The Canadian gold company claims it has offset any environmental damage by planting 700 trees at schools across the north of Ireland and by supporting projects in Cambodia and Malawi. It also claims to treat the local water used in processing with great care.

However, people living in the Sperrin mountains who spoke to The Canary don’t believe Dalradian’s environmental claims. And James Orr, director of Friends of the Earth Northern Ireland, believes Dalradian is engaging in “shameless greenwashing”.

Goldmining, by its very nature, is dirty. Global gold extraction can and has inflicted considerable damage on our planet and communities.

So as Dalradian wants to mine this Area of Outstanding Natural Beauty (AONB), its claims must come under scrutiny. We explore the above claims throughout this article.

Dalradian makes its “carbon neutral” claim in a 41-second promotional video. But it neglects to mention nearly ten years of work, the majority of which wasn’t “carbon neutral”. When we pressed Dalradian to clarify its “from day one” claim, it said:

So that means “carbon neutral” doesn’t apply to its work up until 2019. This includes “more than 190,000 metres of drilling” and “2,000 metres of underground development with three areas of test mining”.

And if one claim in a 41 second video is unclear, what should we make of the rest of Dalradian’s claims? Furthermore, its 2019 Responsible Business Report says:

In 2019 we amended the planning application to remove cyanide from the process and reduce our use of fossil fuels. We listened and our project is better as a result.

But the initial inclusion of cyanide is bewildering. The dangers of cyanide in the extraction process are as well known as the polluting reputation of the extractive industry. So let’s continue to look.

Dalradian says it offset “all carbon emissions by supporting a water purification programme in rural Cambodia“. This means “Dalradian is now recognised as a Carbon Neutral plus organisation”. We’ll explore that project later.

But more locally, it claims its impact on the Sperrins’ environment will be minimal. And it claims it takes a “modern approach” to waste disposal and treats “water with great care”. However, on 5 November 2019, local woman Fidelma O’Kane successfully took a judicial review against the Northern Ireland Environment Agency (NIEA) for permission granted to Dalradian.

The agency allowed Dalradian to discharge nine heavy metals into the Owenkillew river. So without O’Kane’s actions, these heavy metals would have carried on being discharged into the river. It was left to the local community to take legal action to protect their water.

But where are these trees?

Additionally, Dalradian claims that it compensates for any environmental damage at the site:

On two separate occasions, The Canary asked Dalradian if and where these 700 trees had been planted. And on both occasions Dalradian simply confirmed they’d all been planted. It would not disclose any locations for where trees had been planted, nor did it name the schools. While the planting of trees is welcome, the value of these 700 trees doesn’t seem worth the cost. Especially as the Woodland Trust has already given away “hundreds of thousands of trees to schools and communities” across the UK.

Before the post-Brexit Northern Ireland Protocol (NIP), the Woodland Trust in the north of Ireland had ordered 22k trees for schools and communities. And as this trust is deeply invested in woodlands across the north, that work will surely continue.

Additionally, the Department of Agriculture, Environment and Rural Affairs (DAERA) already has a forestry funding scheme in place. The scheme “aims to plant 18 million trees or 9,000 hectares of new woodland over the next 10 years”.

The Canary asked if Dalradian worked with private enterprises on these schemes. It responded:

All forestry grant scheme funding is administered by DAERA. Schemes are part funded from the European Agricultural Fund for Rural Development through the Northern Ireland Rural Development Programme 2014 -2020 and from National funds.

a key partner in the Belfast City Council ‘One Million Trees’ programme which targets planting one million trees in the Belfast region by 2035. Currently we have 4 sites programmed within the first phase. There are no other tree planting programmes at present within the Education Authority.

The EANI said that while “on occasion schools have individually worked with private enterprises to plant trees”:

Individual requests by schools for tree planting are referred to the Education Authority Facilities Management and Asset Management Sections. The location for planting the trees must be checked for future development proposals and to ensure there are no underground services in the area.

So [Dalradian] can’t hide behind this myth of planting a few trees here and there… That is not a practice that we could ever support and would ever support. It’s tokenistic, it’s misleading and… environmentalists will never fall for their dirty tricks.

Moreover, according to Greenpeace:

A newly-planted tree can take as many as 20 years to capture the amount of CO2 that a carbon-offset scheme promises.

Misinformation about the trees?

So with all of this considered, 700 trees would be a tiny drop in a very large ocean. And that’s assuming they exist at all. The Canary asked the EANI if any school in the north had ever submitted a request for tree planting where Dalradian provided the trees or engaged in any tree-planting programme. The EANI said it “is unaware of any such request” and it “is unaware of any such tree planting programme”.

But most worryingly, The Canary learned that the name of a County Tyrone primary school was added to the Carbon Footprint website indicating it had received trees from Dalradian. However, the school contacted Dalradian to say it hadn’t received any trees and that its name should be removed from the site. The school’s name was subsequently removed.

The Canary (again) contacted Dalradian about the whereabouts of these trees and asked for comment on this school. A spokesperson said:

It is our understanding that the trees planted at [name of primary school deleted] were planted as part of a separate project unrelated to Dalradian.

We also asked Carbon Footprint about the whereabouts of the 700 trees, and a spokesperson said:

I can confirm that all the trees have been planted in Northern Ireland. Our process for carbon offsetting is independently audited by the Quality Assurance Standard (QAS).

But the actual location of the trees remains a mystery.

The water purification project in Cambodia

Moreover, Dalradian says it supports a water purification programme in rural Cambodia. When The Canary asked Dalradian what it means by support of this precise project in Cambodia, it said:

Dalradian financially contribute, as is the norm with off-setting projects.

Hydrologic, “a commercial arm of the international not-for-profit IDE“, produces a device that purifies water. It then sells this device to local people, because, according to Canadian Michael Roberts, director of IDE and Hydrologic:

you can’t donate people out of poverty. … and many NGOs and businesses as well are looking at households at, what’s called the base of the pyramid, as a real viable market.

Is Dalradian’s picture a bit too rosy?

The very presence of a mine means the release of carbon and greenhouse gases (GHGs). And even if offset in the way Dalradian describes, it’s still carbon and GHGs that would not have been released had Dalradian not decided to prospect there.

When The Canary put this to Dalradian, it responded:

Climate change and climate actions are both global issues and are being addressed by governments, companies and many other organisations and groups, as well as individuals, making their own choices and changes.

Dalradian has actively sought to reduce its GHG emissions in Tyrone through a Carbon Management Plan. We have taken delivery of our first electric vehicle (replacing a diesel vehicle), upgraded our office heating and lighting system to reduce heating oil / electricity use and switched to 100% renewable electricity supply. Following feedback during the planning process Dalradian also made a number of enhancements to the project which will reduce GHG emissions by 25% through choices such as using alternative power from renewable sources.

Dalradian also recommended contacting Carbon Footprint for further comment. We did this and a spokesperson said:

Dalradian has compensated its carbon emissions supporting projects in Cambodia and Malawi and by local tree planting in N Ireland. These projects are overseen by Carbon Footprint and are audited and certified to internationally accredited standards by the Quality Assurance Standard (QAS). Dalradian has also undertaken a carbon management plan to proactively reduce its carbon emissions in County Tyrone.

As extensively reported by The Canary, Dalradian’s relationship with many in the Sperrins community is poor. Of the roughly 42,000 public submissions in response to Dalradian’s 2017 goldmining application, at the time of writing over 37,600 of these are objections.

He believes Dalradian is a “predatory company who will ravage the Sperrins and leave a wasteland behind”. A view similar to that of the local people who spoke to The Canary.

The global extractive industry has played a major role in damaging our environment. So skepticism is an absolute necessity regarding all mining projects. This article puts Dalradian’s claims under the spotlight. Claims we must continuously scrutinise as long as it or any other company wishes to mine this or any other area of natural beauty.