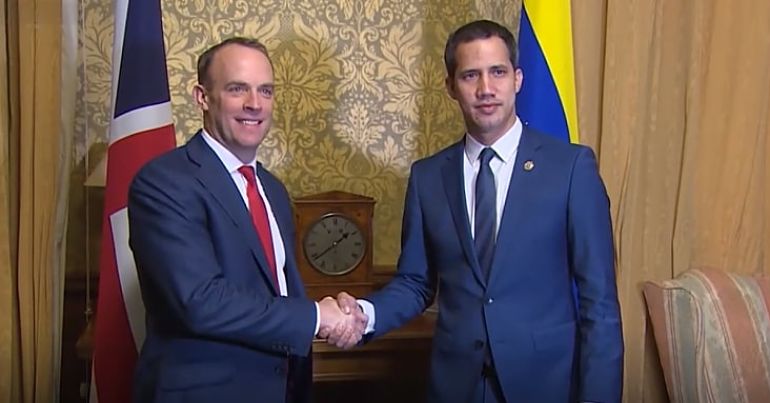 As part of a legal effort to access roughly US$2bn of Venezuelan gold held in the Bank of England, Guaidó’s legal team drew on hundreds of thousands of dollars – if not millions – originally seized from the Central Bank of Venezuela in the US.

This episode of scandalous financial activity is likely to cause alarm in Venezuela given public funds have been deployed to strip even more assets from the Venezuelan state. Over the past two years, Guaidó has been implicated in a number of well-documented cases of corruption, embezzlement, and paramilitary collaboration.

The Maduro board had requested access to the gold in order to respond to the coronavirus (Covid-19) pandemic and purchase food. In February 2021, UN independent expert on sanctions Alena Douhan urged “the governments of the United Kingdom, Portugal and the United States and corresponding banks to unfreeze assets of the Venezuela Central Bank to purchase medicine, vaccines, food, medical and other equipment”.

The proceedings centred on who the UK government officially recognises as president of Venezuela, and therefore whether the Maduro board or the ad-hoc Guaidó board of the Central Bank of Venezuela has the authority to represent and control the bank’s assets held in the Bank of England. Although the UK High Court initially sided with the Guaidó board, the UK Court of Appeal found in October 2020 that the UK’s recognition of Guaidó was “ambiguous, or at any rate less than unequivocal”.

One day before the Supreme Court proceedings began, and in an apparent effort to strong-arm the judiciary, the UK Foreign, Commonwealth, and Development Office issued a statement claiming:

The UK government is clear that Juan Guaido has been recognised by [the UK government] since February 2019 as the only legitimate President of Venezuela.

Guaidó, who has never stood for presidential election, exercises minimal power within Venezuela, while the UK government maintains diplomatic relations with the Maduro government.

In November 2020, Guaidó’s legal team “received a warning from the commercial court judge, Sara Cockerill, in case of not complying with the payment order imposed by the British justice regarding the litigation for the gold of Venezuela kept in the Bank of England”.

By December 2020, Guaidó’s former UK representative Vanessa Neumann told the Financial Times that the US Treasury’s sanctions office OFAC (Office of Foreign Assets Control) “had procrastinated for so long over releasing frozen funds to the Guaidó opposition for legal costs that the [UK] court battle was in danger of being lost”.

Since certain members of the Maduro board were under US sanctions, the Guaidó board had to seek a license from the OFAC in order to make the payment.

Documents read into open court in the UK demonstrate that the Guaidó board’s £400,000 legal costs were eventually paid, weeks late, with money appropriated from the Central Bank of Venezuela in the US.

Previously, US secretary of state Mike Pompeo had permitted Guaidó and his appointees to receive and control property of the Central Bank of Venezuela in the Federal Bureau of New York. In a move denounced by the Venezuelan government as “vulgar plundering”, the US government effectively transferred US$342 of Venezuelan state assets directly to Guaidó.

It is these funds that the Guaidó board tapped into in order to finance its UK legal efforts.

According to witness testimony provided by the Guaidó board to the UK courts:

The only funds under the control of the Guaidó Board are those in accounts in the name of BCV [Central Bank of Venezuela] at the Federal Reserve Bank of New York in the US.

All of the BCV assets controlled by the Guaidó Board are in accounts of the BCV located in the US.

In other words, the only funds available to the Guaidó board were those appropriated from the Central Bank of Venezuela in the US.

Indeed, the Guaidó board acknowledged that:

The Maduro Board has registered a protest at the use of BCV funds in the US under the control of the Guaidó Board to discharge the [£400,000] costs order in the Maduro Board’s favour.

Interim President Guaidó and his appointees have legitimate control under US law of funds held in a US federal reserve bank to which the Maduro Board has no legitimate claim.

The payment of £400,000 was eventually delivered on 7 December 2020 – but “it comes from BCV funds, rather from the Guaidó Board members”, Maduro’s legal counsel complained.

The use of state assets for such purposes suggests how Guaidó might utilise Venezuela’s gold reserves in the UK should he win the legal battle.

Hundreds of millions of dollars of Venezuelan assets looted in the US have already been used to fund the construction of Trump’s militarised US-Mexico border wall.

Hundreds of thousands of dollars, if not millions

Instead of paying, the Guaidó Board members have caused £400,000 of the [Central Bank of Venezuela’s] monies to be sent to the Maduro Board.

it also appears… that the Guaidó Board may be paying the legal fees and disbursements of [its legal counsel] A&P – reckoned by A&P at in excess of US$3.8 million as at mid-July 2020 – from the monies belonging to the BCV at the Federal Reserve Bank in New York.

It thus appears plausible that the Guaidó Board has used multiple millions of dollars appropriated from the Central Bank of Venezuela in order to appropriate even more funds from that same bank.

Tightening the screw on Venezuela

Though UK officials insist on the political independence of the Bank of England, the freezing of Venezuelan assets forms a clear part of the US- and UK-led campaign of hybrid warfare against Venezuela, a crucial part of which involves destroying the country’s economy.

The feeling I get from talking to my counterparts is that they see no alternative to economic pressure – and it’s very sad, because obviously the downside of sanctions is that they can affect the population that you don’t want to suffer. But in the end things have got to get worse before they get better – and we may have to tighten the economic screw on Venezuela.

In January 2019, then foreign minister Jeremy Hunt visited the US. According to briefing notes seen by The Canary, the foreign minister met with senior US officials Mike Pompeo and John Bolton, who privately thanked Hunt for the UK’s position on Venezuela. The internal report added:

Your remarks on Venezuela aired as the top story across UK broadcast media, and your tweet of the video reached your biggest ever social media audience.

Bolton would later write that Hunt “was delighted to cooperate on steps they could take, for example freezing Venezuelan gold deposits in the Bank of England”.

The issue of the Venezuelan gold held in the Bank of England is therefore fundamentally political, and cannot be separated from the US-led effort to destabilise and overthrow the Venezuelan government.

If Guaidó’s legal effort is successful, the threat or act of de-recognition could become a lethal weapon in the UK’s foreign policy arsenal, serving as a justification to asset strip a foreign state and then deliver those assets to individuals allied with UK foreign policy interests.

Sarosh Zaiwalla, senior partner at Zaiwalla & Co., which represented the Maduro board of the Central Bank of Venezuela, commented:

This case treads a fine line between law and politics. Mr Guaidó’s legal case seeks to position him as being above the rule of law in both Venezuela and the United Kingdom on the basis of a statement made by the United Kingdom Government.

It is absurd that €1.6 billion of a country’s gold held in the UK can on that basis be withheld from the government in control of that state and be given to representatives of Mr Guaidó, who has no control of any apparatus of state. Such a result would have potentially serious and adverse ramifications for the City of London as a safe place to sovereign assets.

The simple reality in this case is that any ruling upholding Mr Guaidó’s purported appointments, if recognised, would fly in the face of reality. His purported appointees have no ability to act on behalf of the Banco Central de Venezuela in any effective way in Venezuela.

The Supreme Court is expected to hand down its decision in late Summer or Autumn 2021.