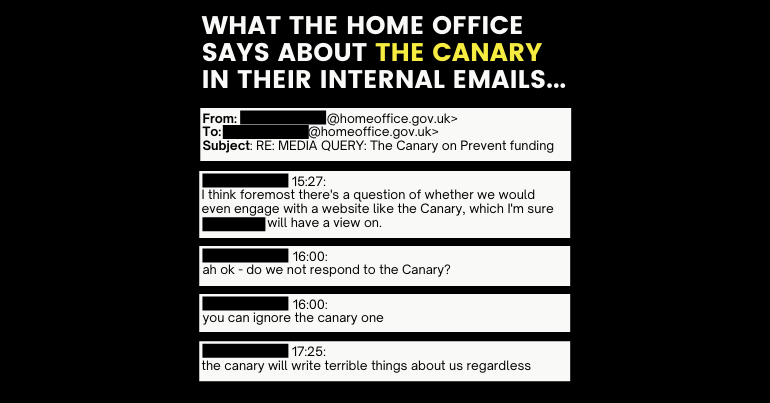 A freedom of information request to the Home Office has revealed a reluctance from press officers to respond to requests for comment from The Canary’s journalists. The information we’ve uncovered sets a dangerous precedent for freedom of the press. Further, it calls into question the Home Office’s standards of impartiality.

As part of our #ResistBigBrother series, we’ve had a lot of contact with the Home Office as we monitor racist counter-terror strategies. It’s standard practice for journalists to get in touch with whoever we’re writing about to give them a chance to respond.

However, we noticed that responses weren’t always forthcoming or were difficult to wrangle. So, we put in a freedom of information (FOI) request to see what we could uncover.

What did we find?

Much of the response was redacted, but we can clearly see a discussion about choosing not to respond to The Canary:

And another conversation which reads:

ah ok – do we not respond to the Canary?

This FOI request shows that we do respond to queries from The Canary but that there have been occasions where press officers have not done so.

Civil servants must act with impartiality and must not act in a way that unjustifiably favours or discriminates against particular news media. We have reminded our media officers of that obligation.

When we showed the Independent Media Association (IMA), a partner of The Canary and independent media cooperative, it told us:

These FOI requests clearly illustrate a partisan approach to information sharing, an approach that is utterly inappropriate and irresponsible for the Home Office to take.

Over the past year, independent journalists have been investigating whether or not the government treats certain news outlets differently. In November 2020, The Canary’s Emma Guy reported on an Open Democracy investigation which uncovered a possible ‘Orwellian’ unit that blacklists certain journalists:

the idea of a unit being designed and set up to screen journalists is incredibly troubling. By suppressing the freedom of the press, authorities run the risk of destabilising democracy and violating the public’s right to freedom of information.

Why would the government blacklist certain journalists?

The FOI response from the Home Office offers up an obvious answer to this question:

the canary will write terrible things about us regardless

It would appear that The Canary’s history of calling the Home Office to account has gained us a reputation that press officers aren’t thrilled with.

Why does this matter?

The Home Office is, by its own admission, obliged to respond to all news media seeking comment. We asked the IMA what it made of the FOI response as a whole, and it told us:

At a time when trust in institutions and indeed our democratic processes are at an all time low, we must recognise and reinvigorate the importance of transparency and accountability, particularly in our response to the plurality of media platforms in this country, many of which provide a vital public service in holding decision makers to account and making power more visible to citizens. Sadly this FOI request reveals a structural and complicit determination to achieve the polar opposite from the Home Office.

We certainly don’t expect the Home Office to be ecstatic about our coverage. But, we do expect an impartial and fair response to our requests for information and comment. The idea of a government department picking and choosing who it responds to is outrageous. It’s all the more outrageous that one would do so depending on which news outlets have criticised them.

Regardless, The Canary will continue to investigate and report injustices. Making power and injustice more visible to readers is exactly what we’ll continue to do.