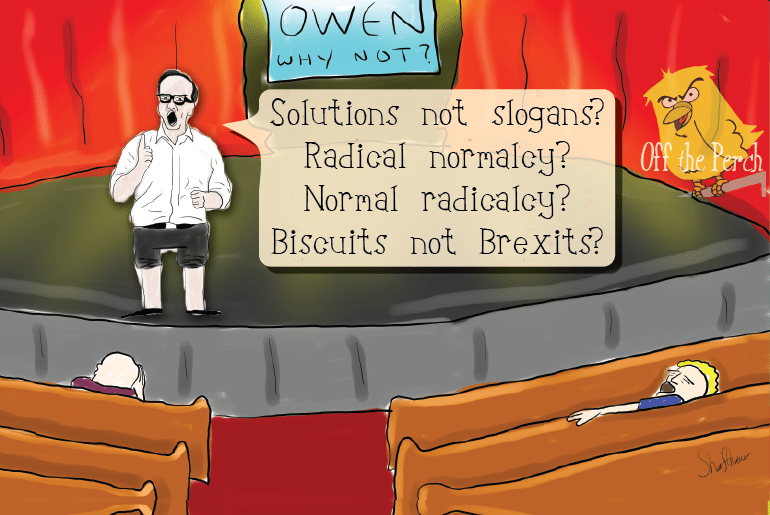 The #ChickenCoup backers behind Owen Smith are assuring Labour members that the party is now only three buzzwords, slogans, or soundbites away from success – failing to realise that their insistence on the hollow rhetoric of the 90s is what doomed them to the sidelines in the first place.

To be fair to whichever half-formed mutant Malcolm Tucker they have running the show, it’s not that they haven’t learned some lessons – it’s simply that they’re trying to implement them all at once.

This is why we’re being forced to watch the spectacle of Smith saying ‘slogans aren’t enough’ with one breath and then sloganising ‘solutions not slogans‘ with the next. It’s also why he’s claiming to be “normal” to the right-wing and “radical” to the left, and why he’s calling Corbyn and McDonnell useless on TV and then copying their policies on Twitter.

What’s actually happening is that the great New Labour beast is writhing about in its death throes, and like the exorcised demon that it is, it’s vainly flickering through its many forms in an attempt to maintain purchase on the corporeal realm.

This is allegedly why Owen Smith spent nine hours last night standing before an increasingly empty audience – the would-be leader apparently doing nothing other than improvising slogans in the hope that one of them would eventually stick.

Of the several thousand he came up with in his stream-of-consciousness ramble, the following are the most notable:

Although he’s so far failing to connect with the membership at large, Smith should at least take comfort in knowing that his confusing style of radical normalcy has won him the support of the figureheads of ‘reasonable activism’, i.e. the band Proportionate Ire Against the Machine.

In a show of support, they actually dedicated their most famous song to him at an arms fair they were playing last night – said song being “Shilling in the Name Of” – the refrain for which goes, “yes please, I’ll do whatever if you pay me”.