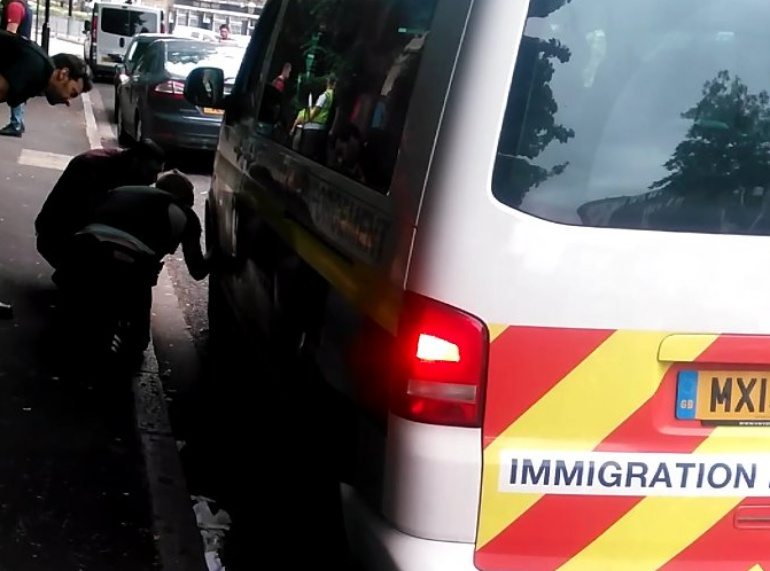 The Metropolitan police and immigration officers have been accused of conducting a sting operation against anti-raids protesters.

The Anti-Raids Network was set up as a “loose network of groups and individuals working to build the resistance to immigration raids by producing and sharing information and materials”. Their website has a raft of information about immigration rights in many languages, as well as what to do if you see an immigration raid.

Last week, the network received a verified alert that there was an immigration operation happening on Deptford High Street in London. A clearly marked “Immigration and Enforcement” van was parked down a side street, and officers were visiting local businesses.

According to locals, the officers informed local businesses that they didn’t intend to arrest anyone and were only there to provide information.

The real target of the operation appears to have been activists opposed to the raids. This is the account from the Anti-Raids Network:

As is often the case, there was no sign of any immigration officers in or near the van. Two people stopped to look at the sight of the ‘racist van’ that had returned yet again to the neighbourhood, before walking on. Seconds later, half a dozen cops dressed as builders – high viz jackets, muddy Timberland boots, paint-spattered clothes, pencil behind the ear – jumped the pair, shouting that they were under arrest for supposedly damaging or tampering with the van. One of the undercover officers had been standing in the street and the others had obviously been hiding behind the wall. There is no evidence of any damage to the van, nor were the people arrested in possession of anything that could cause damage to the vehicle. In fact, video footage clearly shows the van undamaged and being driven off by an officer after the arrests, and many witnesses are recorded as stating that there was simply nothing wrong with it. The arrestees were taken to Lewisham police station and released on bail without charge 10 hours later.

There has been a fightback against immigration raids in the area with a growing movement against them, especially around the market where there is a regular anti-raids stall. Campaigners have accused the raids of being an excuse for trying to ‘socially cleanse’ and gentrify the area.

Locals are fed up with the raids, and the impact on business, according to the website Rabble:

A common complaint was that raids on the market had been stepped up in recent years. One shop has already been raided five or six times in 2015; another shop three or four times since January. This is spoiling their business: as well as having goods seized, the presence of police and immigration officers on the market completely undermines business, and encourages customers to stay away.

Furthermore, people are feeling that their communities are being “destroyed” by the raids:

One person told me that the thing they liked most about working and living in Deptford was that people supported each other, regardless of where they were from or what the colour of their skin was. They also told me that it felt like this sense of community and openness to others was being destroyed by the raids, and that they worried about the future of the market if they are allowed to carry on.

Last month, when an Immigration Enforcement van was parked in a side street, it was re-decorated as a ‘racist van’ and had ‘Stop the Raids’ spray-painted on the back (along with a smashed window).

The police, working with immigration officials, apparently hoped their sting operation would catch people in the act of damaging their van. Instead, they managed to arrest people for the crime of looking at a van.

Coordinator of the Network for Police Monitoring (Netpol) Kevin Blowe told The Canary:

Campaigners like the Anti-Raids Network are providing vital information on legal rights and giving London’s most ethnically diverse communities targeted by the Home Office the confidence to stand up to bullying and intimidation. Residents and shopkeepers say they resent so-called ‘intelligence gathering’ by ‘Immigration Enforcement’ officers and the constant presence of their vans. It is hardly surprising that in some areas, there has been a backlash.

The Metropolitan Police’s use of covert surveillance in response to the relatively small number of previous incidents of vandalism of Home Office vans seems to reflect their belief that organised local opposition to immigration raids in south east London is growing. The police were clearly hoping a successful sting operation would send some kind of a warning.

With so many other pressures on time and resources, this is political policing at its most palpable. Expect similar surveillance operations in the future.

Opposition to the raids is growing, and people are coming together and responding to the impact the raids are having on their communities. Following the revelations about Byron Burgers organising a fake training day in conjunction with the police and immigration officials, there have been several protests outside its stores, and it is facing a boycott over its complicity with the raid.

Further action was taken on 29 July by activists who released thousands of bugs into Byron Burgers’ central London store. One protester described the motivations for the action:

Well, it’s to the point really, people often refer to migrants in disgusting terms. Katie Hopkins called them cockroaches in an article just a few months ago. We want to show these people what cockroaches really look like, and we’ll unleash them on places like this if they don’t change their ways.

While people will have mixed views about this type of action, it has undoubtedly cost the company money, and has sent a clear message that people will not tolerate and are prepared to act against immigration raids.

The sting operation by the police, meanwhile, has shown how willing authorities are to waste time, money and resources in an attempt to target protesters. They are clearly worried about the fightback. And although this does mean people should be careful, it is heartening to know these actions are having an impact.