Trump declares #WarOnTwitter - targets everyone who ever insulted him 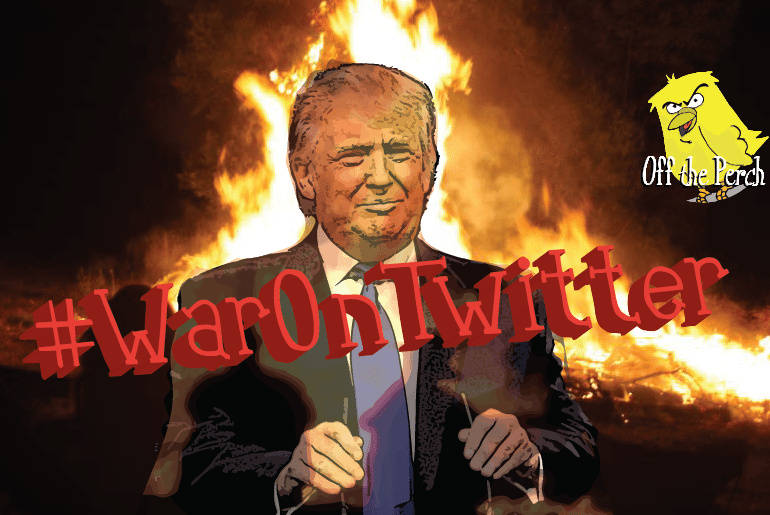 When the celebrity space-hopper from hell, Donald Trump, was elected President, Twitter users thought one thing:

He won’t come after me because of what I said about him, right? Right? RIGHT!?

Which is why no one was surprised to learn that he’s following up the historically ineffectual War On Terror with the future-shambles that will be known as:

When will it trend?

In the past, such a war would have been thought impossible. Primarily because:

a)  No one could possibly be that idiotic.

b)  There’d be no way of tracking these people down.

The first one is obviously no longer the case. And neither is the second. Because Barack Obama – that guy we’d love to believe is the cool dude from the memes – HAS BEEN SPYING ON YOU.

That was the argument. When a guy who seemed half-decent when you squinted at him a bit was in charge. But now we’ve got Donald Trump. A man who has the good humour and even temperament of a rabid stoat. A man who has the modesty and restraint of a labrador in a bouncy castle made out of blancmange.

The opening salvo began when Trump turned up at the house of Billy Smith, aged 12. The boy’s mother screamed: “He’s just a child!” as her son was carried away. “Don’t worry!” – the Donald shouted back. “The waterboarding table we’ve got is height adjustable!”

The next attack came when he turned up at the offices of the Scottish National Party. “Top ‘o the morning to ya, boyos” he shouted at the Scots, before taking aim at them with his tank. While he was at it, he also took time to explode some disabled people that he said were acting entitled and like they were owed something. Which was ironic, because the tank he was in had been re-fitted so that his tiny hands could operate the levers.

Trump’s rampage of destruction carried on for several more days, until he finally grew tired and nuked a couple of global hemispheres. Because you know what children get like when they’re tired, right? Especially when said children are angry, 70 year old men.