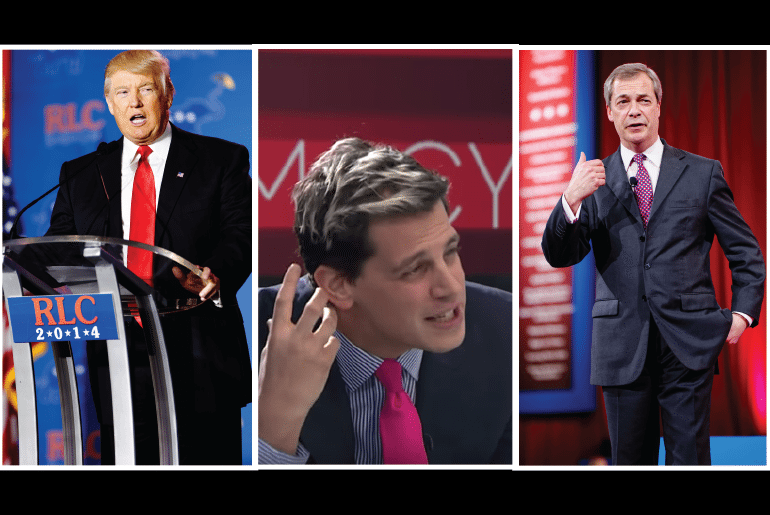 Far-right news website Breitbart has become a champion of the ‘alt-right‘, or the alternative right. Steve Bannon, the executive chairman of Breitbart, is currently transitioning from that role to becoming Donald Trump’s Chief Strategist. One of Bannon’s protégés is Milo Yiannopoulos – a man who could be described as the alt-right’s poster-troll. Yiannopoulos became more widely known in the UK when he clashed with Cathy Newman on Channel 4 News. During that interview, he spelled out some of the alt-right’s key beliefs. And within mere days of it taking place, both Trump and Farage have shown the flagrant hypocrisy of everything he said.

This is the moment Milo Yiannopoulos is challenged on @BreitbartNews headlines and so-called “post-truth politics.” pic.twitter.com/9v9wRVBz5r

A leaked audit has suggested that UKIP has misspent EU funding. The allegation is that money which should have been used for European activities was used to fund polling that aided UKIP’s national interests. As a result of these claims, UKIP is being investigated.

I’ve understood absolutely the rules. This is pure victimisation. I am the most investigated MEP in history.

Farage is also linked to Breitbart through his former aide and one-time potential replacement, Raheem Kassam, who is the editor-in-chief of Breitbart News London. As such, you’d expect Farage to have a better understanding of what Breitbart readers want in a political figure. But as Yiannopoulos told Cathy Newman on Channel 4 News:

I think that the grievance brigade, victimhood, the idea that hurt feelings are some kind of special currency. I think that needs to come to an end.

Yet this is not the first suggestion of Farage’s victim complex. As The Telegraph noted in 2014:

At some stage, Mr Farage will also need to discard the very useful persecution complex he’s copied from the Lib Dems.

Another pertinent quote from Yiannopoulos was:

Nigel Farage has had the lowest voting attendance in the European parliament of any MEP. The record of his UKIP colleagues is equally appalling. These are the facts of his party’s performance. And as a result, the scrutiny it finds itself under is unsurprising. Even if Nigel Farage feels it’s unfair.

Trump’s Vice President-elect, Mike Pence, went to the theatre on 18 November. After the performance, the cast addressed him directly:

Mike Pence, we welcome you here. We are the diverse Americans who are alarmed and anxious that your new administration will not protect us, our planet, our children, our parents.

The Theater must always be a safe and special place.The cast of Hamilton was very rude last night to a very good man, Mike Pence. Apologize!

This once more falls under the Yiannopoulos criticism of “victimhood”. It also uses wording that’s very similar to the idea of ‘safe spaces’. Here’s Yiannopoulos on safe spaces:

We’re in a situation now where students can go to university and they come out dumber than when they went in. They are infantilised by safe space and trigger warning culture. The idea that interrogating a new idea, coming into contact with a school of thought or a person that doesn’t conform to your prejudices is somehow problematic. That it gives rise to trauma.

Trump, and to some extent Farage, have partially risen to prominence on the backs of people who embody alt-right thinking. These ideas see them oppose traditional Conservatives as much as they oppose progressives. They also embody the idea that white masculinity is under attack. The central hypocrisy of their thinking is that they want to deride “victimhood” in others while claiming it for themselves. And nothing makes that more apparent than the persecution complexes of the leaders they’ve pledged support to.

– Play your part in the ongoing media revolution, against the likes of Breitbart, by reading and supporting new media organisations that do better.