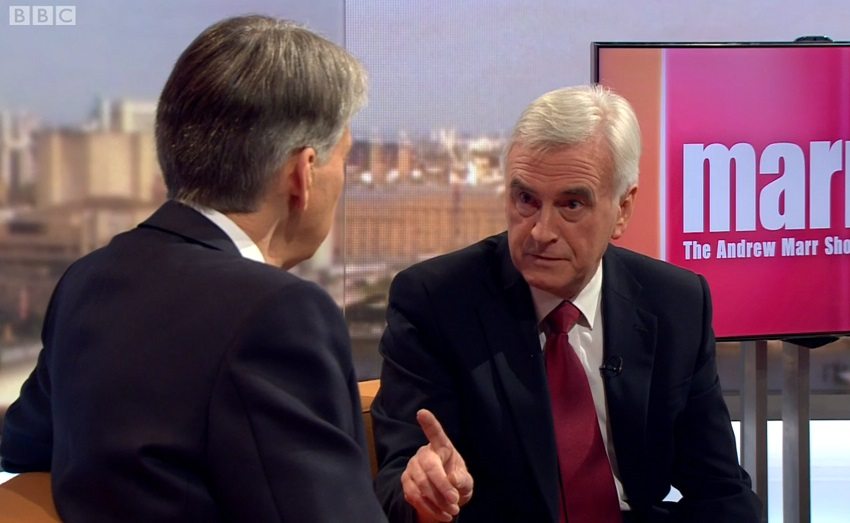 During his solo interview with Marr, McDonnell was able to make a clear case against Conservative austerity policy. He said:

The existing fiscal framework that the government has used has failed. And they know that. It’s been six wasted years. The deficit was supposed to be eliminated last year. It’s now £45bn. Debt is £1.7tn now…

He then went on to explain how investment in infrastructure and public services, lacking under the Conservative model, would stimulate a 1–2% growth rate in the economy. With that, he made it clear that anti-austerity economics is not something only supported by the radical left.

Marr then asked a direct question.

You’ve talked of an end to austerity. Does that mean reversing the government’s welfare cuts, for instance?

Yes…we would seriously tackle tax evasion and tax avoidance, and in that way we would have funds to invest in our public services.

Chancellor Phillip Hammond then appeared ahead of his Autumn Budget Statement. Discussion began with the so-called ‘JAMs’, an acronym for those who are ‘just about managing’. Hammond described them as people for whom “the system wasn’t working”.

Hammond went on to state that Conservatives:

Don’t want to make anybody worse off. We want to secure the gains that have been made in the last few years, recognise that for the next couple of years we’re going to face some uncertainty around the economy, but then we will have a whole raft of opportunities.

He then admitted that:

many forecasts are pointing to a slowing of economic growth next year, which will be a sharp challenge for the public finances…We have an eye-wateringly large debt and we still have a significant deficit.

Clearly keeping to a script, Hammond repeated the phrases ‘period of uncertainty’ and ‘taking advantage of opportunity’ no less than four times during his segment.

In the final part of the programme, McDonnell and Hammond sat side-by-side on the sofa. As the topic of benefit cuts arose, McDonnell looked Hammond in the eye and asked, “are you going to change direction?” The Chancellor’s response did not inspire confidence. He resorted to blaming Labour and an inherited in-work benefits system, which meant “Welfare spending has had to play a part in the fiscal consolidation”.

McDonnell then pressed him further, leading to a very revealing exchange.

McDonnell: But this is money coming out of the pockets of people who are doing everything asked of them. Trying to get work, or in work, looking after their children, contributing to society. I’ll just ask you this question, will you change direction? Because if you’ll reverse the cuts to universal credits in full and the £30 a week cut to ESA…you’ll have my support.

Hammond: John, what I have not heard from you, is where you would get the money from to do all these easy options.

Hammond: We now have the top 10% of taxpayers making a higher contribution to taxation than they did at any time under the last Labour government.

McDonnell: Let me tell you, the IFS (Institute for Fiscal Studies) said the bottom 10% have 25 times been hit harder that the top 10%. That’s the IFS. So give us that assurance and you’ll have our support.

Of course, Hammond was unable to do so and fudged his answer:

I’ll not make Britain an unattractive place for businesses to invest.

McDonnell finished off with a coup de grâce that left Hammond non-plussed:

Hammond had no real response. What became clear from his contribution is that the Conservative conference promise of ‘a country that works for everyone’ is far from reality. Hammond will continue taking ‘tough decisions’, which in Conservative policy terms means penalising the most vulnerable for the excesses of the wealthy. John McDonnell exposed that superbly.

Watch the exchange between McDonnell and Hammond below: