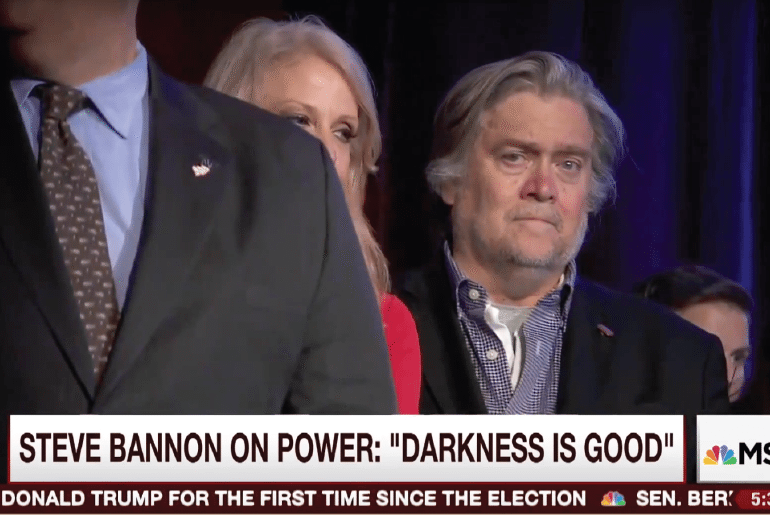 There have been numerous articles criticising former Breitbart executive chair Steve Bannon since Donald Trump made him his chief strategist. Criticisms have focused on both his support among white supremacists and the far-right, and the many worrying statements he has made himself. There have also been people who have come out in support of Bannon. But more often than not, these people are doing his image more harm than good.

The following is a brief summary of Gingrich from Politico:

Newt Gingrich brought a new, confrontational, shoot-the-hostages approach to Congress, shutting down the government twice in the process. He’s the man who divorced his first wife while she was in the hospital for cancer, and was eventually forced to resign as speaker not only because of an embarrassing Republican wipeout at the polls, but also because Congress began investigating a labyrinth of fraudulent nonprofits that looked like the kind of scandal that would send anyone back into permanently quiet retirement.

Bannon himself has described Breitbart as “the platform for the alt-right” (i.e. the far-right). But he also told The Hollywood Reporter:

The problem with these two statements is that many of the alt-right’s key figures are self-professed white nationalists. So even if Bannon doesn’t share their beliefs, he still has no problem in pandering to and bolstering them.

Peter Brimelow, the editor of the white supremacist site VDARE.com, said of Breitbart:

Latterly, Breitbart emerged as a nationalist site and done great stuff on immigration in particular

And of Bannon’s contribution to nationalist news and recent appointment to Trump’s administration:

It’s irritating because VDARE.com is not used to competition. I presume that is due to Bannon, so his appointment is great news.

Breitbart journalists have risen to the condemnations of their employer by publicly defending him. Raheem Kassam, the editor-in-chief of Breitbart News London, is one of those who have leapt to his defence. Kassam said:

The headlines you’re reading there are satirical opinion pieces rather than news items. And they are satirical if you go ahead and read them. They’re using shock headlines to poke a bit of fun. Bear in mind Stephen K Bannon isn’t responsible for the day to day output for Breitbart News, there’s an editorial team.

Kassam may be hedging his excuses here. He assures some that these articles aren’t meant to be taken seriously. And then he assures anyone else that their publication wasn’t Bannon’s fault anyway.

Kassam’s brief campaign to be UKIP’s leader is one of the things he’s famous for. Tweeting ableist and transphobic comments is another:

It may not be accurate to say that Bannon has masked his more extreme opinions, as many of the things he has openly said have been notably extreme. And it is hard to decipher where his opinions end and those of his followers begin. But it will become clearer the longer he’s on Trump’s team.

Even if he isn’t the white supremacist that people fear, it’s clear from the company he keeps that Steve Bannon has an easy-going relationship with hatred. It’s also clear that he will happily fuel and nourish this hatred to get what he wants. And in practical terms, there is no difference between someone using racism for the sake of it, and someone using racism for their own benefit.

– Play your part in the ongoing media revolution, against the likes of Breitbart, by reading and supporting new media organisations that do better.