Theresa May sets out her plans for a ‘fantasy’ Brexit - Canary 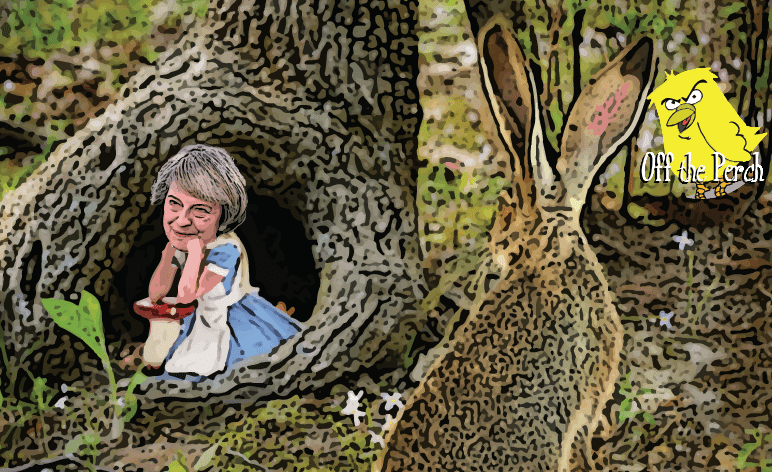 There have been many potential Brexits on the table since the 2016 referendum. These have included:

And even some that weren’t egg-related puns.

But despite all of the options available, we still didn’t know which one we would get. Until now, that is. As Theresa May has finally made it clear what Brexit she will be picking from the greasy-spoon menu available to us.

The PM’s first speech on 17 January saw her outline the rough edges of this fantasy Brexit. A Brexit which will see us:

Theresa May honestly just said that global trade is so important to her that she set up a department headed by….

The PM also gave a second speech, however. One which was less reported. Possibly because she gave it to herself, in a toilet cubicle, between hyperventilating and muttering profanities.

Thankfully, one of Off the Perch’s roving reporters was there to hear it. And also to change the toilet rolls and clean the sinks. Because this job really doesn’t pay as well as people seem to think it does.

But anyway, we can relay the speech/cry-for-help to you in full now:

Well of course we’ll have our cake and eat it! Why would we aim for anything else? And why just a cake? Why not a five-tier trifle that’s made out of ground-down unicorn horns? Why not an eight-tier blancmange that’s sprinkled with gold dust and prosperity? Or a ten-tier flan with a cold-fusion centre on a base of missing Picassos!?

But what does the public think?

We played the recording of May’s ramblings to some members of the public to see what they thought:

“Honestly, I thought it was very brave of her to promise that everything would be fine. That things would be better even. You know, despite all the evidence to the contrary. Because it takes a lot of courage to ignore all of these moaning experts and say ‘You know what, f*ck it, let’s have a pop and see how it all turns out’.”

“Was she on drugs? Or was I on drugs? And if I wasn’t, should I be? I suppose there’s only one way to find out. See you in ten years time!”

Well at least we know now

Despite many people being worried, at least we finally know which way things are going. Meaning that businesses can plan accordingly. And if they decide that a lack of Single Market access means they’ll leave the UK, I guess the Brexiteers will just quietly accept that. Because God knows they feel you should respect a person’s right to leave.