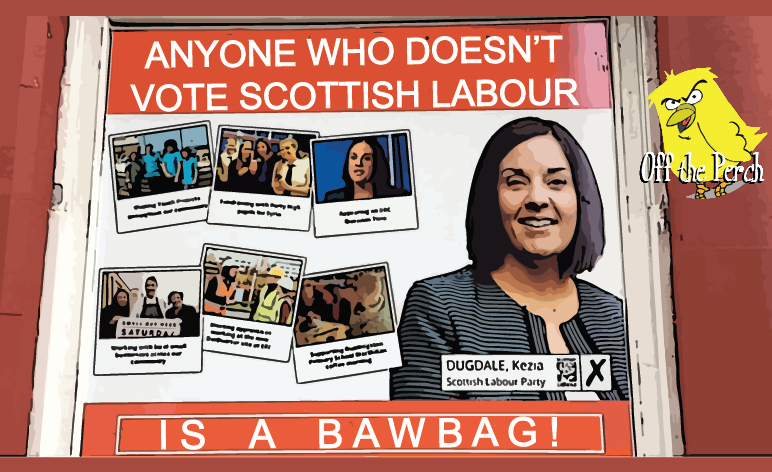 Labour just had an excellent weekend of campaigning in Scotland.

A weekend which began with Sadiq Khan suggesting that anyone who supports Scottish Independence (ie 45% of all Scots) is as bad as Nigel Farage. And a weekend which ended with Jeremy Corbyn threatening to impose a Trumpian-lite hard-border if Scotland ever leaves.

Because as we all know, if there’s one thing that Scots respond well too, it’s threats, insults, and stupidity.

Scottish Labour’s leader, Kezia Dugdale, is riding this wave of genius on a surfboard of sloganeering. By which I mean she’s come up with a new slogan. Said slogan being:

Anyone who doesn’t vote Scottish Labour is a bawbag.

Off The Perch caught up with Scottish Labour’s Kezia Dugdale to find out more:

OTP: People are pointing out that most Scots don’t vote Scottish Labour anymore. So basically you’re saying that most Scots are ‘bawbags’. Is that how you pronounce it? Bawbag?

KD: Okay, but once they know that not voting for us makes them bawbags, they’ll have to vote for us again. Right?

OTP: Why would they? You just called them all bawbags.

KD: Err… but they are? What are you not understanding?

OTP: The bit where you try and win back voters by attacking a popular party? You know, instead of attempting to come up with a unique and inviting vision of your own.

Although many people think that the leaders of Scottish Labour are just completely clueless, there is a competing theory. Said theory being that they realise they’re finished in Scotland, but they don’t want to pay anyone redundancy money. And as such, they’re tanking the party as fast as they can.

Which obviously sounds implausible. But is it any more implausible than the idea that they seriously thought comparing the SNP to UKIP would help?