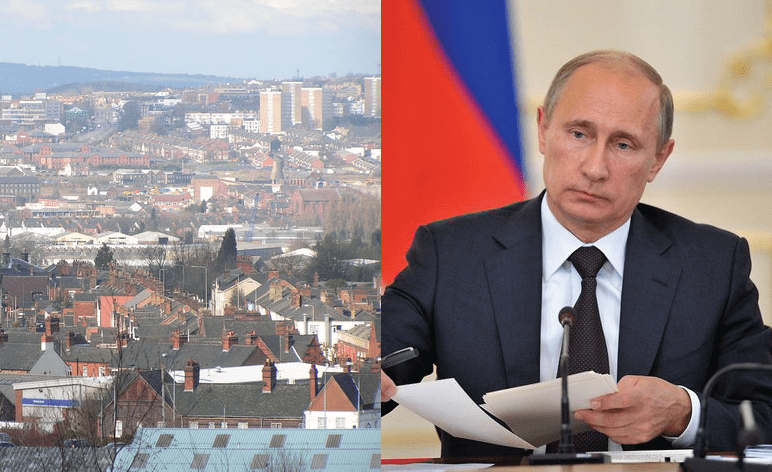 There were several mainstream media articles last week about possible Russian interference in the Stoke by-election. They reported that a single pro-Russian Twitter account had apparently orchestrated this interference. An account which appears to be managing several other accounts. The Canary has looked at the information available, and we have also managed to speak with the person who operates the alleged Russian agent. But what we’ve found has been more speculation than confirmation.

The information which led to articles from the BBC, The Mirror, and Business Insider originated from Alex King. The BBC refers to King as an ‘independent researcher’. He is known for the online #FreeSavchenko campaign which sought to free a Ukrainian MP who was held by Russia. He also tracks Russian propaganda on Twitter. It is through these activities that he noticed that several of the accounts he follows had suddenly started posting pro-Labour/anti-UKIP content in the run-up to the Stoke by-election: 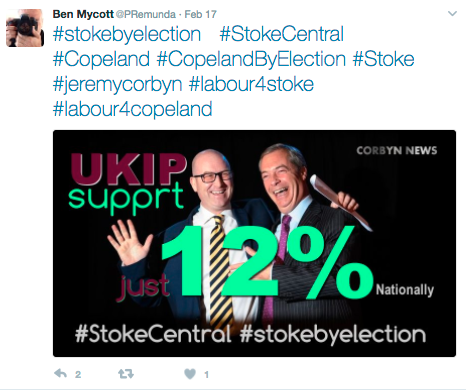 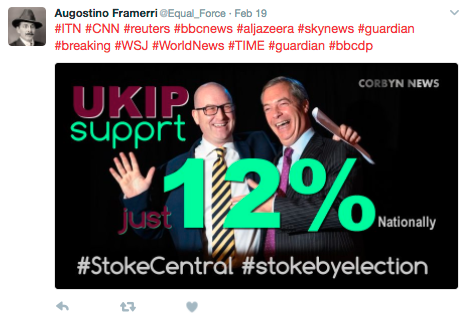 King believes there are 20 connected accounts that are all run by Twitter user @Hermius1. He shows evidence for this in the following video:

The Canary asked King what the purpose of these accounts would be. He said they were:

Controlled by one account. Used to spam Syria hashtags and then Eastern Ukraine and lately Ukip… designed to clog up hashtags as part of a state run Russian effort.

The spamming of hashtags is a regular thing by Russia, be it media, trolls, propagandists etc, particularly using images which might catch the eye. They want to have total control over a hashtag, such as Syria, MH17, Donbass, Ukraine etc.

The thing with the images, and info on them, suggests it’s someone really up to date with what’s happening, clearly propaganda and takes a large amount of effort doing what he/she does.

King listed several accounts which are now protected. This means they still exist, but you can only see their tweets if they give you permission. Several others are still viewable, however. And what’s obvious in each is that they tweet identical images and retweet directly from Hermius1: 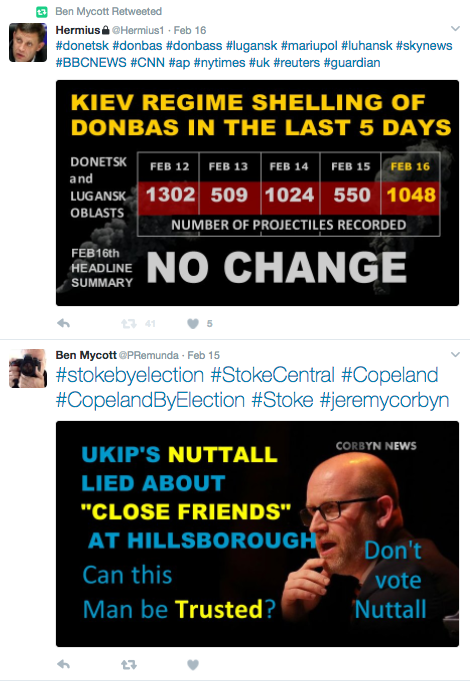 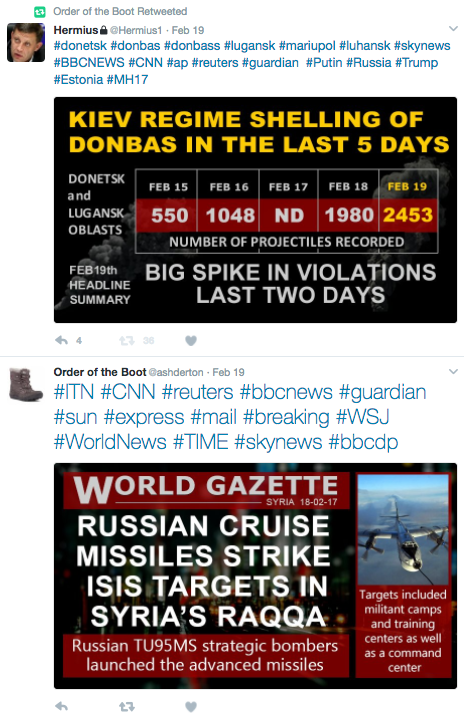 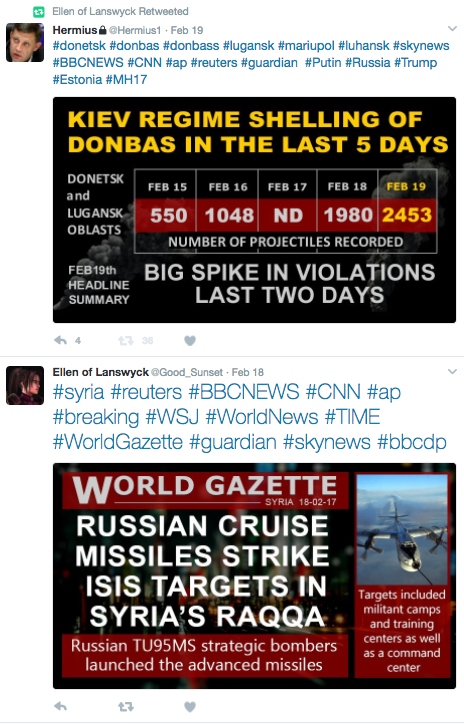 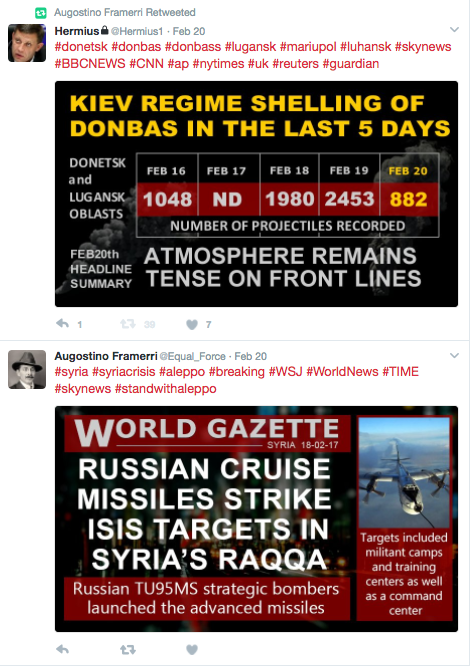 An actual link to Russia, however, is purely speculative, based on the pattern of behaviour. Business Insider summarised the extent of the evidence in its article as follows:

If not employed by Russia, Hermius1 is clearly obsessive. But anyone familiar with political social media will be no stranger to accounts which are intensely dedicated to supporting or discrediting Israel, Islam, Russia, etc.

Media theorist Marshall McLuhan predicted this phenomenon when he said:

World War III is a guerrilla information war with no division between military and civilian participation.

The Canary contacted the Hermius1 account regarding the allegations made against them. They told us:

I have absolutely nothing whatsoever to do with the Russian government, any arm of it, or, indeed, ANY organisation connected to Russia. I have never been paid by Russia and would not accept such an arrangement either. I do not know ANYONE who is paid for any tweeting in such a way – [the] so called “trolls”.

I am concerned for world peace and a decrease in tensions between the West and Russia and promote tweets that counter-balance some of the fake news being published in western media about Russia- particularly with regard to the Ukraine conflict and Syria. If tensions are allowed to continue on this downward path, there could be very serious consequences for the world. Let’s not sleep walk into a world war.

I also support the rights of people in East Ukraine, who have done nothing wrong, but to reject the events of Kiev 2014, when anti-Russian groups illegally seized power and took over their government, without a vote, a referendum or even a consultation – unlike the Scottish people did in the UK.

I live in the UK, I am a British citizen and therefore have an interest in UK politics. I am not a UKIP supporter, as is made out. I have two accounts, one personal and this one for campaigning. I have looked at the other accounts and I have no connection with them except, perhaps, with what might be called ‘Twitter storms’, which are organised campaigns, well known on Twitter, aimed at pushing a certain message or campaign using pre-prepared graphics, texts and hashtag lists.

However, this does not necessarily prove that Hermius1 is working for the Russian state. And it’s important for reporters to point that out.

There are increasing reports of Russian interference in Western politics. And they may well be true. Russia has a long history of such activities, and has recently added an ‘information warfare’ branch to its military. A branch it has said will produce propaganda that is “clever, smart and efficient”.

If media outlets like The Mirror are going to carry on publishing headlines like the following, they really need to start turning speculation into confirmation:

The more these claims go unverified, the less people will believe them. Sites like Breitbart are already painting the ‘Russian interference’ narrative as fake news. And their stories have gained traction, because hard evidence is so far lacking. If Russia really is interfering in our politics, public disbelief in the issue will not be in anyone’s favour. So rigorous journalism is more necessary than ever.

– Support The Canary to help us cover more of the stories that matter.

Featured image via Wikimedia and Kremlin