President Trump actually ‘3 Russian kids in a suit and wig' 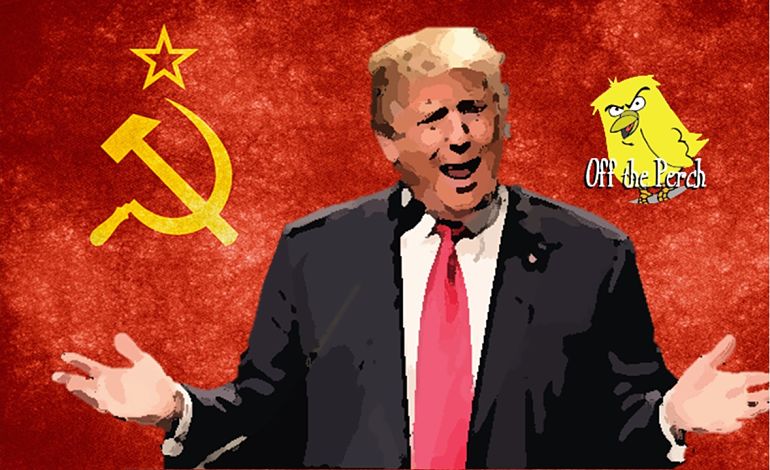 There was shock across the US today with the discovery of a leaked receipt for Netflix. Donald Trump may, in fact, be three kids on each other’s shoulders. The damning document, curiously written in Russian and addressed to ‘Daddy Putin’, contained sensational information. It seems that Russian leader Vladimir Putin may be paying for Trump’s Netflix, but only the ‘kids section’ is allowed. For their critics, Trump’s true identities may explain the most unsuccessful presidency in years; and an odd obsession with “shooty gun guns” and “a big red dog”.

Trump has been under fire for his failed and unpopular policies since taking office. Labelled as ‘unstable’, it may be that much of this instability comes from keeping up a charade. Careful analysis of Trump’s gait, shape, and general mis-coordination have revealed a shocking truth. As Dr Sean Spicer, General Practitioner to the White House, explained:

There is no question. Trump is 3 kids in a big suit. The middle one gets bored, the bottom one wanders in circles, and the top one can’t write, talk in sentences or spell.

Worse still is an analysis of Trump’s executive orders. Several key documents are riddled with spelling errors and drawings of cats, and one is literally a letter to Santa. Outraged fictional character and Hillary advocate Santa Claus said:

I would bring Trump some coal for being a naughty boy but I think he’d want that.

The document reveals that Trump is “not old enough” to pay for his own Netflix. The letter itself is addressed to Putin and it seems the bill was paid by the Kremlin. Although Russia has denied any strict links with Trump’s political mandates, it cannot deny this. With Putin responsible for Trump’s daytime TV, it’s no surprise that the president is talking gibberish:

I have a very good brain. Brain begins with B. Shut up Vladimir, I’m talking. Syria cannot be trusted because they are baaaad. Glory to Mother Russia.

Off The Perch contacted the Kremlin. So far, Putin has offered no comment, as he is off “fighting many bears”.

Politics is not child’s play

Trump’s critics have come out in force. With America’s international standing in tatters, its foreign policy labelled as ‘racist’, and its education system going to the dogs, the Democrats may finally have caught a break. It is unknown if a tri-headed juvenile entity is constitutional, but with two-faced politicians running the UK, it seems that Trump may still have cards to play. He commented via Twitter:

It was left to a spokesman for Democrat sex god Bernie Sanders to provide some perspective:

This is truly ridiculous. As a socialist and secular humanist, Bernie is in favour of young people getting into politics. But three children squeezing into a grown man’s suit is just silly. The last time that happened, it was in a pizza parlour and Hillary Clinton lost an election.

Hillary Clinton could not be reached for comment as she was hacking NHS servers.

– Root out Communist traitors in your neighbourhood using a combination of amateur surveillance, mail stealing and a loosely organized vigilante gang headed by a buck-toothed yokel named ‘Chad’.