An angry voter slays Boris Johnson on the Dementia Tax, forcing him to flee Cornwall at speed [VIDEO] - The Canary 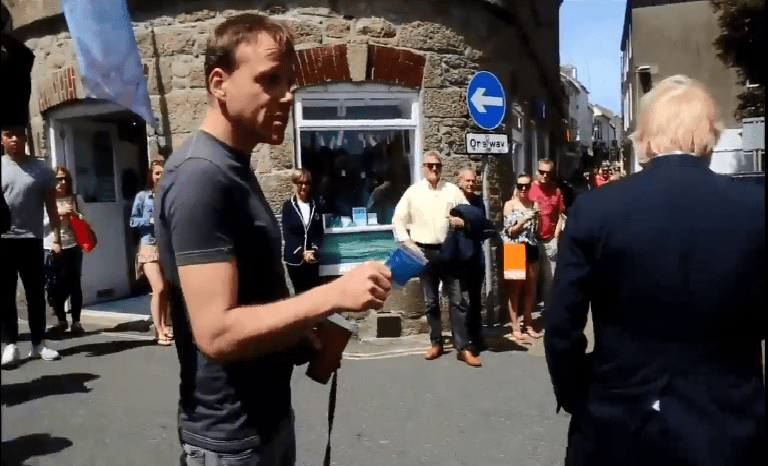 An angry voter absolutely slayed Foreign Secretary Boris Johnson on the so-called ‘Dementia Tax’ on 22 May. And in yet another instance of a Conservative minister avoiding discourse with the local people, Johnson fled the scene at speed.

Go pick on some pensioners somewhere else. We’ll look after ours.

May watered down the Dementia Tax earlier in the day after condemnation from the media, the political class, and the general public. Theresa May will still take away elderly people’s assets to fund their social care. But she announced that there will be a cap on the value of assets taken.

As Johnson swiftly headed towards his chauffeur, Cunrow called out May’s many U-turns:

Do you really think Theresa May, who does U-turn after U-turn – who’s actually done one again today, is gonna do the right thing?

And Cunrow has a point. In a speech in Wrexham earlier in the day, May lambasted the “hysterical warnings” of opposition MPs over Brexit. Even though she supported the Remain campaign herself just a year ago.

The incumbent Prime Minister’s hard Brexit stance sits among her many U-turns. Among a catalogue of anti-Brexit statements, May expressed doubt over a post-Brexit deal with the EU:

It is not clear why other EU member states would give Britain a better deal than they themselves enjoy.

But now, it’s a very different story. May is waxing lyrical about a “better deal” for British people. And she says:

Leaving the EU presents us with a world of opportunities and I am determined to seize them.

Whatever your view on Brexit, the Conservative leader’s inconsistency means people like Cunrow find it difficult to believe her. Here are a number of other key issues May has U-turned on since becoming Prime Minister less than a year ago:

Andrew George is a much better bet

George was the most rebellious MP of the Coalition government. He introduced a private member’s bill, for example, to get rid of the bedroom tax.

As Boris Johnson was bundled away from scrutiny, Cunrow called out the Conservatives’ record. And when they can’t debate Jeremy Corbyn, deliver on a promise, or discuss issues with the electorate, voters are understandably asking: how on earth are they going to negotiate with the EU?