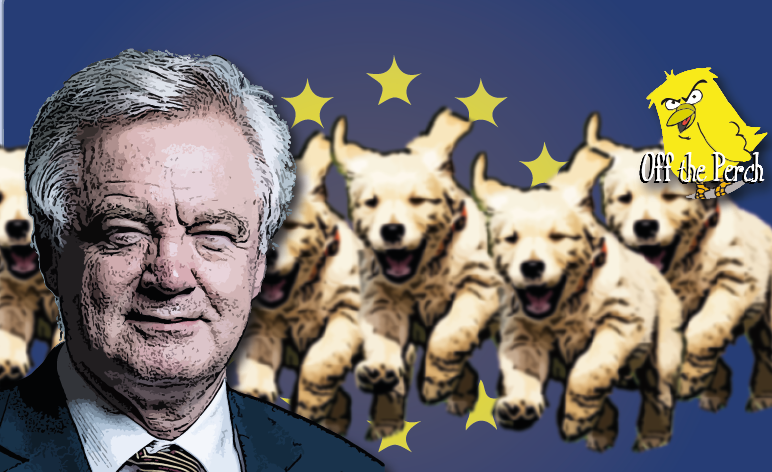 So far, Brexit talks have been going…

…about as well as could be expected?

The next round of talks has been delayed, however, with some people suggesting that:

But the official reason is that, although we do indeed have a plan, said plan has unfortunately been eaten.

Speaking to the press, Dave Davis explained that:

Would you believe that my homework – err – I mean my detailed Brexit plan – was eaten by a dog?

There was a murmuring of disbelief in the room.

What if I told you it was three dogs? And that they were a German Shepherd, a French Bulldog, and an Irish Wolfhound?

There was a commotion in the room at this point, as journalists from The Mail, Express, and Sun started shouting things like, “TYPICAL!” and “SEND THEM BACK!” and “BRING BACK HANGING!”

This led to several gripping exposés, in which grainy photographs of European dogs were captioned with statements like:

THEY DON’T EVEN SPEAK ENGLISH!

REVEALED! HOW DOGS THAT SOUND A BIT FOREIGN ARE BEING CARED FOR AS IF THEY WERE NORMAL, AND NOT MISTREATED LIKE YOU KNOW THEY DESERVE BUT ARE TOO AFRAID TO SAY BECAUSE OF THE FUCKING PC POLICE!

While these exposés were being written, Davis was seen running off into the distance. A high-resolution photograph revealed that the clipboard he’d been using had the word “HELP!” scribbled on it repeatedly.

We tried calling Downing Street for an official response, but an official pretended that we’d got the wrong number.

So yeah – things are going about as well as you’d expect.

Probably a little bit better, if anything.