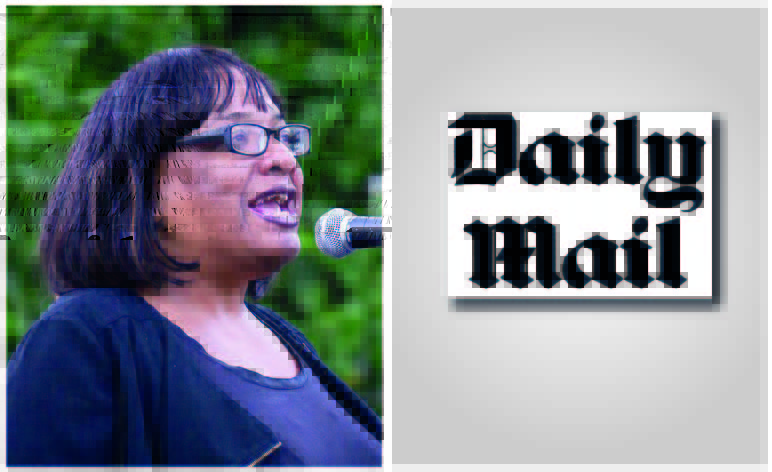 On Thursday 14 September, Diane Abbott spoke on Good Morning Britain about the abuse she receives. In describing the abuse, she used some of the actual words that have been directed against her. Elements of the media have used this to manufacture outrage about a racist slur going out on national daytime TV. And in doing so, they have deflected from the real issue – that a person in 2017 is enduring this abuse on a daily basis.

Speaking about the abuse, Abbott said:

Searching for ‘Diane Abbott’ on Google after the interview produced results like these: 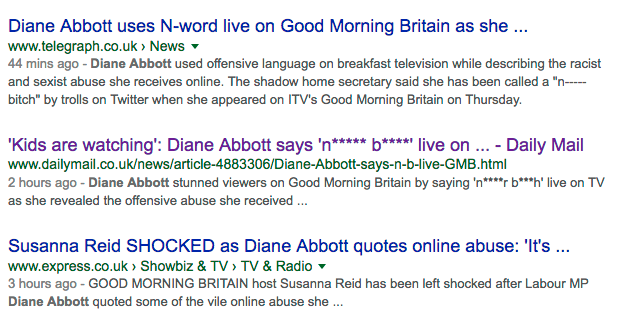 These stories presented examples of outrage like the following: 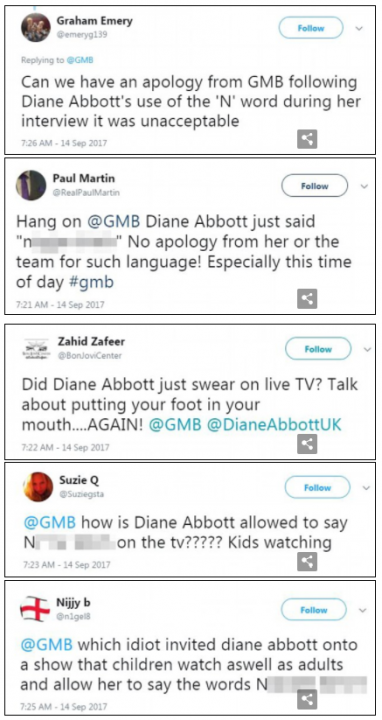 ‘Diane Abbott’ was trending on Twitter, and if you clicked on it you’d see that most people were either supportive of her or abusive. By pulling out the minority of tweets that criticised Abbott without resorting to abuse, news outlets like The Daily Mail were able to write stories that suggest the real “outrage” is something other than racist abuse:

This sort of reporting creates a buffer between the reader and the discussion of racism. It also suggests that speaking out about abuse is equally as bad – if not worse – than the abuse itself.

The Daily Mail does in fact point out that some people were supportive of Abbott, but before you get to that point you see the above headline and tweets, and you are told:

But she provoked fury today as she dropped a controversial expletive, while talking openly about some of the comments she was sent.

Presenter Ms Reid was forced to apologise and appeared to give the politician a dressing down.

Ms Abbott’s choice of words sparked uproar on social media, as viewers took to Twitter to vent their fury.

What is this other than bullying? Britain has a racism problem and a bullying problem and we're all responsible for letting it get this bad. pic.twitter.com/2VYgWt2mWZ

And The Sun published this:

On the day Diane Abbott reveals the scale of abuse she has faced, the Sun chooses to run these comments: https://t.co/ZQCPq0vN4a pic.twitter.com/vh6kvw1POC

There was not a significant backlash against Diane Abbott for speaking out about the abuse she endures. But there has been an attempt to give the impression there was. And this attempt to deflect from the real issue is a sad display of whose side these organisations are on.