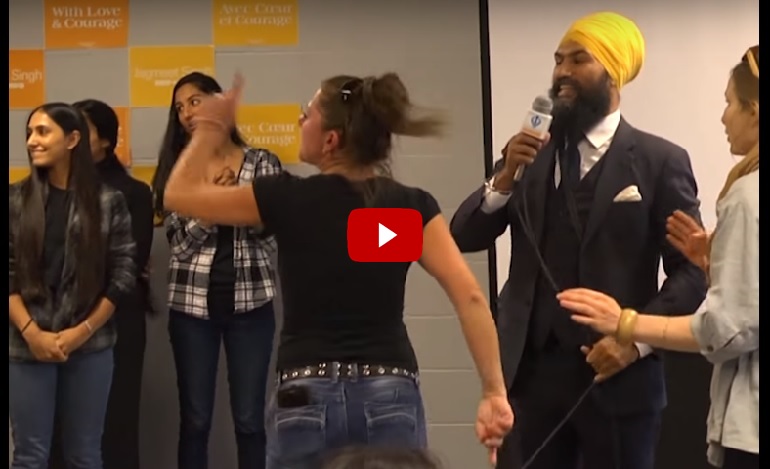 With just two words, a progressive Canadian politician has managed to turn an angry heckle into viral gold. And the event could potentially propel him to the leadership of the New Democratic Party (NDP) – Canada’s equivalent to Britain’s Labour Party.

How to respond to an angry heckler…

The UK has Jeremy Corbyn. And the US has Bernie Sanders. But now, Canadians are choosing the person to lead their own centre-left fight-back.

One of the candidates for the NDP leadership is Jagmeet Singh, a Sikh politician who wears his spirituality with pride. And his words have gone viral in recent days following his calm response to an angry heckler on 6 September.

The heckler asked “When is your Shariah going to end?” and said “We know you are in bed with the Muslim Brotherhood!”

Singh responded not with anger, but by insisting that he and his supporters followed two specific principles: “love and courage”. And he stressed:

We welcome you, we love you, we support you… Everyone in this room loves you.

If Singh becomes the new NDP leader, he’ll be the first person from a visible minority group to lead a major party in Canada. But the focus of the heckler’s anger was apparently Singh’s opposition to a bill in Quebec which is currently seeking to ban niqabs from public service. Niqabs are veils that some Muslim women use to cover their faces while leaving the area around their eyes visible.

Singh’s calm response to the angry heckler has now garnered him tens of millions of views on the internet. And many people now believe the human rights lawyer and martial arts expert is the “odds-on favourite” to be the next NDP leader. But what is his political platform?

Well, Singh is campaigning for higher taxes on corporations and high earners, a minimum wage of C$15 per hour for workers under federal jurisdiction, and to decriminalise personal-possession drug offences. He has also insisted that, while religious, he believes “strongly in the right of a woman to choose” and “the right of same-sex people to marry”. And while some have questioned his foreign policy credentials, he has called for justice for Palestinians and an end to illegal Israeli settlements, stressing that people should not conflate criticism of Israel’s government with antisemitism.

There is an NDP leadership candidate to the left of Singh, though. Niki Ashton is the person most looking to take a leaf out of the books of Bernie Sanders and Jeremy Corbyn. She is outspoken on women’s and indigenous issues, wants electoral reform and an end to tuition fees, and favours nationalising assets of public interest and increasing the taxes of corporations and high earners. She also opposes controversial pipeline projects and wants to push investment in green projects. As always, though, there are some establishment figures who don’t want the NDP to move too far to the left, and who call Ashton a “youthful Corbyn-fancier”.

In the coming days, the NDP will decide on just how closely it wants to follow the examples of Bernie Sanders and Jeremy Corbyn. But whatever happens, it looks like Canada’s main social democratic party could be in for a breath of fresh air.

– See the policies of all the NDP’s candidates here.