Theresa May just whitewashed a 'human catastrophe' in the UK, live at PMQs [VIDEO] - Canary 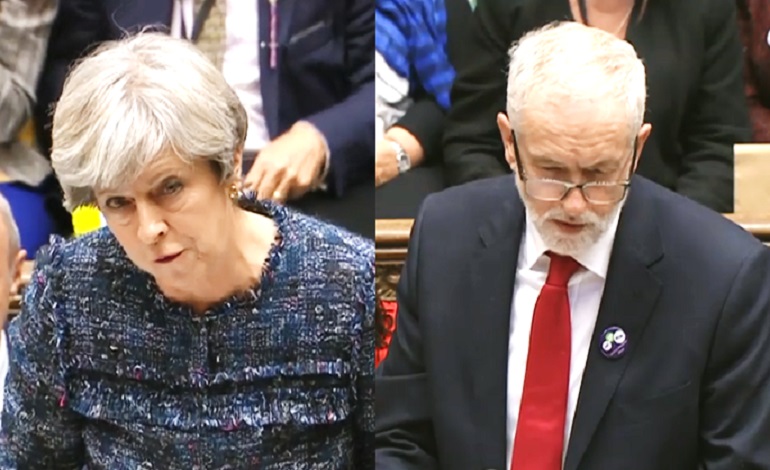 At Prime Minister’s Questions (PMQs) on Wednesday 13 September, Theresa May whitewashed her government’s role in a UN report that said the Conservative government had created a “human catastrophe” in the UK. But Jeremy Corbyn also bowed to pressure on the issue, after people called for him to “break his silence” over it.

As The Canary previously reported, the UN Committee on the Rights of Persons with Disabilities (UNCRPD) met in August in Geneva, Switzerland. It assessed how well the UK government is sticking to its obligations under the UN Convention on the Rights of Disabled People; ratified by the government in 2009.

The Labour leader had previously left the party’s response to the report to Shadow Work and Pensions Minister Debbie Abrahams. But at PMQs, Corbyn appeared to bow to pressure from campaign groups Disabled People Against Cuts (DPAC) and Black Triangle, which repeatedly called on him to “break his silence”. Because he directly asked May:

Previously, Corbyn’s only response to the report had been to retweet on 31 August a Labour Party gif about the report. Shadow Chancellor John McDonnell did the same. And Shadow Minister for Disabled People, Marie Rimmer, hadn’t even tweeted about it. But then, her Twitter account and website do not even acknowledge the fact that she is the Shadow Minister for Disabled People. Also, since she started the job on 1 February, out of 20 contributions in parliament only five have been related to disability.

Back at PMQs, May side-stepped Corbyn’s question, saying [from 12.07]:

The United Nations committee says, and I quote, that ‘government policies have caused grave and systematic violations in the rights of disabled people’. We’ve seen punitive assessment and sanctions, cuts to disability benefits, and the bedroom tax that has hit disabled people; 4.2 million of whom now live in poverty.

He then went on to ask about the public sector pay cap. But May’s response to the UN report? That the government spends £50bn a year on support for disabled people. Her interpretation of the situation, however, is not shared by the UN.

The UNCRPD released its findings on 31 August; you can read The Canary‘s full analysis here. But it said the government is failing disabled people in over 70 areas – from basic human rights, to not tackling discrimination, to the damaging impact of austerity and welfare cuts. It gave over 90 recommendations, the most critical in its 10-year history.

But we’ve been here before. This is now the fourth report in 14 months by the UN into the Conservative government. All of them condemned the Conservative government’s treatment of disabled people, saying they had committed “grave” and “systematic” violations of their human rights. And it’s been just over a year since disabled people blocked Westminster Bridge, to much media attention, to highlight what the UN has now reported on. But still, nothing has changed.

We’re pleased that Corbyn eventually raised the issue of the UN finding the Tories guilty of the grave and systematic violation of disabled people’s human rights; and that he pointed out that the UN committee have said their reforms were a human catastrophe for disabled people. But we are so bored having to listen, yet again, to Theresa May churn out the old lie that the UK spends £50bn supporting disabled people.

The Tories’ response to the UN reports? To simply shrug their shoulders and say they didn’t believe them. So it is quickly becoming unclear as to what it will take to give disabled people the rights and recognition in the UK they deserve.

And while Corbyn’s intervention is to be welcomed, it should not have taken him three weeks to do so. Sadly, his slowness and May’s attitude reflect views in society as a whole. A society that many disabled people must think has become so obsessed with ‘self’ that it’s forgotten about each other.

When disabled people are literally dying in the UK due to government policy, one and a half questions at PMQs simply isn’t good enough.