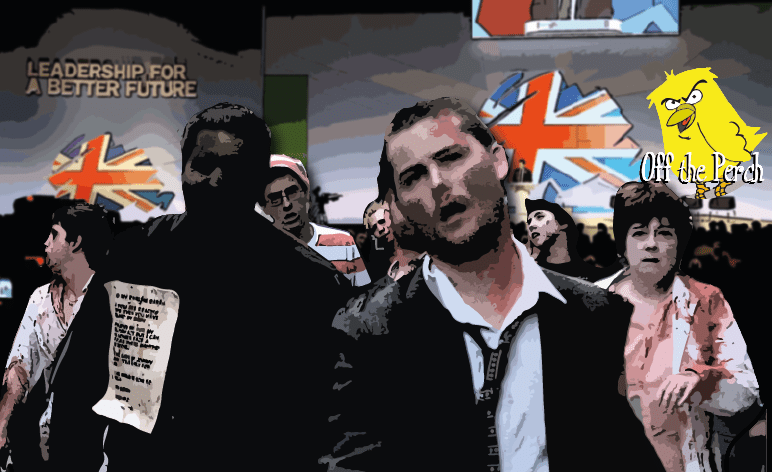 When an old animal becomes unable to sustain itself, the humane thing to do is put it down. In fact, to keep it going in a state of ‘living death’ could be cruel. Which is now very bad apparently.

But the owners of the Conservative Party don’t see things that way. Which is why they’ve allowed the government to hobble on regardless – despite the fact it’s lame, tone deaf, and incontinent.

The Conservative Party is owned by a bad conglomerate of industrialists, inbreds, hoover magnates, arseholes, and vampires. If it wasn’t for the financial life support these people provided, the party would have croaked a long time ago.

An observer at the Conservative Party Conference reported:

It’s just sad to watch really. Over half of today’s speakers walked on stage and just stared into space – not saying anything – a look of dread on their withered faces.

When it was Boris Johnson’s turn to talk, he howled like a wounded goat and then wet himself. Theresa May trembled like a run-over cat for half an hour and then spontaneously started shedding hair. I tried giving her some water, but it just ran off her lips and down her top.

I mean – not that difficult – because they’re some of the worst people in history, and they probably deserve a lot worse.

The end is nigh

Although the Tories aren’t going to get a quick end, they are at least coming to an end.

Unless, of course, someone Frankensteins them.