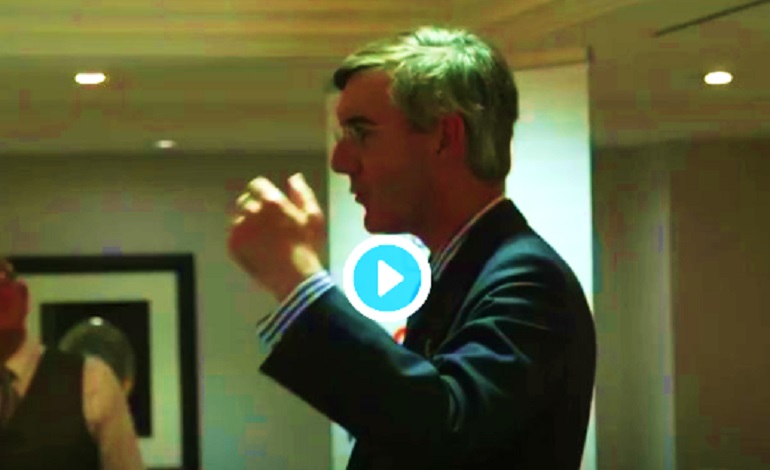 A video of Jacob Rees-Mogg speaking at a Conservative Party Conference fringe event has surfaced. And far from dispelling any myths that the MP for North East Somerset is out of touch with the rest of us, it compounds the image of him being a ‘Tory Toff’.

Rees-Mogg was speaking at the “Leave Means Leave” Brexit event in Manchester. He was, in his words, “reiterating the benefits of Brexit”:

because this is, oh this is so important in the history of our country.

He went on to compare Brexit to:

The Magna Carta… the Burgesses coming at parliament, it’s the Great Reform Bill… the bill of rights… It’s Waterloo… Agincourt, it’s [the Battle of] Crécy. We win all these things.

At this point, an enthusiastic member of the audience declared, to cheers from onlookers:

He went on to say that Brexit was “such a positive thing” for the UK, declaring it a “liberation”.

But then, in perhaps the most curious part of his diatribe, Rees-Mogg proclaimed of Brexit that (apparently like Waterloo, Agincourt and Trafalgar):

Young people will love it!

.@Jacob_Rees_Mogg extolls the benefits of Brexit at one of the busiest fringe meetings of the @Conservatives' conference. #cpc17 pic.twitter.com/36vhH5OPtb

In response to Rees-Mogg’s assertion that “young people will love” Brexit, The Canary asked “young people” on Twitter what they thought of the Tory MP’s speech. Disclaimer: The Canary cannot verify the age of these respondents:

A lot of young people had tremendous fun at Agincourt and Trafalgar, screaming in delight as their guts spilled out on the floor.

Sick of seeing old, rich, out-of-touch Tories claiming to speak for me

My daughter just watched this and said "Eiwww it's that anti-abortion freakzoid". *Googles freakzoid* x

Strong and stable May?

But on a serious note, what Rees-Mogg’s speech may do is put to bed any rumours of a Tory leadership bid from him. He noted that the Tories:

have to back Theresa May… her position needs to remain solid and well supported by all Conservatives to get the Brexit deal done. No more faffing around about alternatives to Mrs May. She is our leader. She needs our support, she deserves our support.

The tears of a clown

In some ways, Rees-Mogg is an MP made in the mould of Boris Johnson. Because it’s easy to scoff at his aristocratic, out of touch demeanour and often preposterous statements.

But just like BoJo, underneath the ‘toffish’ exterior lies a politician adept at presenting an amusing public image to mask some very questionable views. We should not forget Rees-Mogg’s opinions on abortion and same-sex marriage, for example. So while he may be a source of fun, Rees-Mogg is just another dangerous Tory who “young people” certainly shouldn’t be listening to, let alone loving.