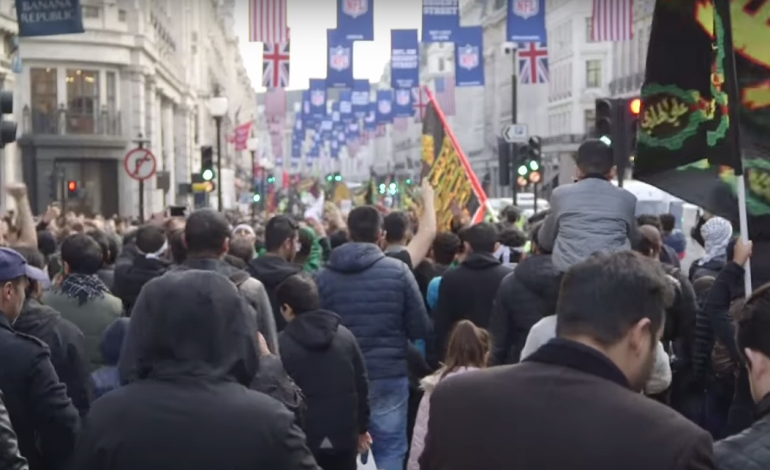 Ashura, the festival of mourning in Islam, this year fell on 29 and 30 September. These days of mourning, practised by members of the Shia sect of Islam, celebrate Imam Hussein, a martyr and grandson of the prophet Mohammed. But this year, thousands of Muslims used the religious festival to do something amazing. They took to the streets of London to denounce Daesh (Isis/Isil) and terrorism in general.

But most of the media failed to report this.

Standing up against Daesh

Muslim worshippers began their protest in Hyde Park and marched to Trafalgar Square. People were carrying signs which read ‘Muslims condemn terrorism’, ‘180K imams have spoken against IS’, ‘ISIS = enemies of Islam’, ‘90% of ISIS victims have been Muslim’. Indeed, researchers at the National Consortium for the Study of Terrorism and Responses to Terrorism (START) emphasise that Muslims are the people most affected by global terrorism.

Mike Haines, the brother of aid worker David Haines – who was beheaded by the man known as ‘Jihadi John’, spoke to the crowd. He said:

It is important that we react in a positive way against these hate-mongers. I mourn my brother every day.

Haines also addressed the issue of violence against Muslims. He added:

The callous murder of my brother, the bombing of a teenage concert in Manchester, the deplorable attack on a place of worship in Finsbury Park, the inexcusable name-calling of people based on their religion or colour – they all have one thing in common which is to incite hatred.

The march is also an important counterpoint to the claim made by some political commentators that moderate Muslims do not condemn terrorism. Indeed, one website lists all the instances in which Muslim spokespeople and leaders condemn extremist atrocities.

Theo Hobson at The Spectator argues that the Muslim community needs to do more than say ‘We condemn terrorism’. He believes:

What we need to hear from British Muslims is that they reject the vision from which terrorism comes.

Similarly, Communities Secretary Sajid Javid said, following the London Bridge attack, that British Muslims have a “unique burden” when it comes to opposing extremism. Javid highlighted that, after every supposedly Islamist-inspired terror atrocity, “a lot of well-meaning people” claim the attack has “nothing to do with Islam”. He said this is true. But he added that, “speaking as a Muslim myself, we need to ask ourselves searching questions”. He called on Muslims to find the “courage” to have those “difficult conversations” about terrorism.

It is of course troubling that, according to a Channel 4 survey, a third of British Muslims reportedly refuse to condemn people involved in violence against those who ridicule the prophet Mohammed. Findings also show that two thirds of respondents would apparently not alert the police to someone “they knew was getting involved with people who support terrorism in Syria”. And just under a quarter supported there being “areas of Britain in which Sharia law is introduced instead of British law”.

But while this may be the case, we must all encourage and support the sentiment these marchers were expressing. We will not defeat terrorism by blaming the Muslim community for it. That will just create more division, more tension, more ‘us vs them’ thinking. We must stand alongside British Muslims in the common fight against a warped ideology which threatens all of us.