Claim that Johnson isn't undermining May undermined by Johnson - The Canary 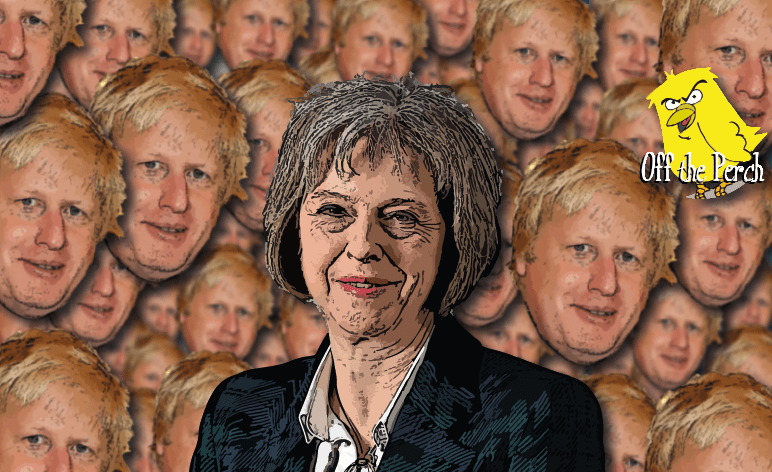 Many people are claiming that Boris Johnson is undermining Theresa May. And the reason they’re claiming this is because he is. And you’d have to be incredibly deluded or astoundingly weak to claim otherwise.

Luckily, the person in charge of our country is both of those things.

And as such, she was able to pretend that Johnson wasn’t making her look like a clown. Even as he literally painted clown makeup on her unwilling face.

May was being interviewed when she made the claim that Johnson wasn’t undermining her. Even as she was saying this, though, the Foreign Secretary was standing behind her – making raspberry noises and pulling stupid faces.

The PM is a seasoned professional when it comes to pretending that everything is fine though. As such, Johnson had little option but to walk up and start twerking in front of her.

When that didn’t work, the grimy aristo-path simply shouted, “I AM BORIS! HEAR ME BORE!” over everything May was saying. Which wasn’t much, to be fair, as May has very little to say.

Of course, Johnson did eventually manage to overshadow her. Notably when he joked that Libya has a bright future once they:

clear the dead bodies away.

Johnson was being a systematically repugnant, boarding school mutant with all the compassion of a nail bomb. A person who affords human life the same sanctity that a Labrador offers a discarded sausage. A third-rate terror who would steer this country with all the grace and competence of a toddler operating a steamroller.

Although obviously Johnson can’t be fired.

…who exactly is defending him at this point?