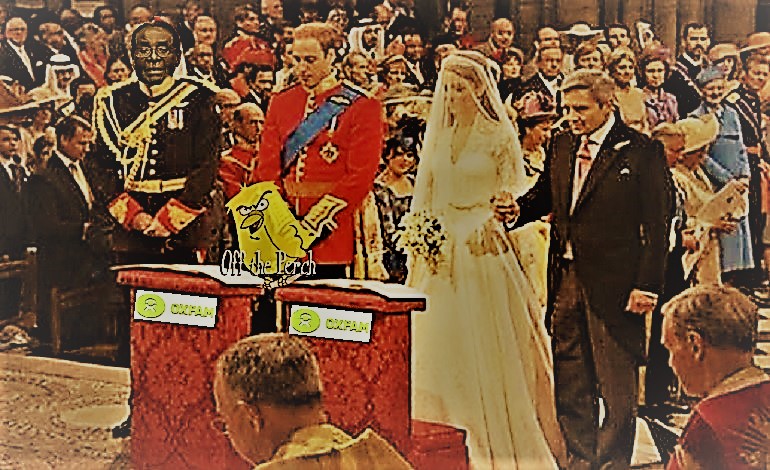 Experts have calculated that 2018’s two royal weddings will cost as much as the total wealth of a “small African dictatorship”; plus “the yearly bounty of six rogue pirates” and “two dozen herds of Freedom Food-approved, organically-bred, gluten-free mountain goats”.

But their groundbreaking research has been slammed by commentators loyal to the monarchy, who branded the group “liberal, tofu-eating, Guardian-reading bleeding heart Corbynistas”.

On Monday 22 January, FAMOX – the campaign to “raise poor people out of poverty by just enough to stop them grabbing their pitchforks” – launched its annual How Much Do The Windsors Rip Us Off By? report. It calculates how much the British royal family owns, compared to the other 99.9% (recurring) of the solar system.

FAMOX also looked into the cost of the two royal weddings that are being held this year. And it’s that research that discovered the headline findings. FAMOX’s Senior Analyst for Vacuous Displays of Pageantry, Carl Marcs, told Off The Perch (in an exclusive interview recorded in FAMOX’s plush Islington head office):

It is scandalous that in 2018 the royal family can spend £234,363,792 on two weddings. This money could keep the entire population of Angola fed on mung beans and brown rice for the next 25 years.

Imagine that? Imagine how happy those people would be, knowing that they had the security of one meal a day? Also, the money could go towards ensuring every child has a UK government-backed, privately-financed Western education. And vaccines from GlaxoSmithKline. And it would keep five FAMOX executives in all the Pret a Manger they can eat for a decade…

But critics have hit back at FAMOX’s research. Tobias Jung, from the Institute of Economic Arrogance (IEA), told Off The Perch (in an exclusive interview recorded in the IEA’s plush Islington head office that it shares with FAMOX):

The liberal, tofu-eating, Guardian-reading bleeding heart Corbynistas at FAMOX have got it wrong. Again. As the IEA has repeatedly shown, it’s the capitalist free markets – controlled by 147 corporations, rigged by the City of London and with repeated financing by the taxpayer – that ensure that brown people have just enough to live on so they don’t end up eating each other. WELL, having said that – they probably do that for fun, anyway…

Off The Perch asked a woman we nearly ran over with our Boris Bike what she thought of FAMOX’s research. She said:

It’s OUTRAGEOUS the royal family has so much money!

But have you seen Meghan Markle in this week’s OK Yah! magazine?

I feel SO sorry for those poor brown babies in Africa!

But look at the diamond-encrusted engagement ring my boyfriend just got me!