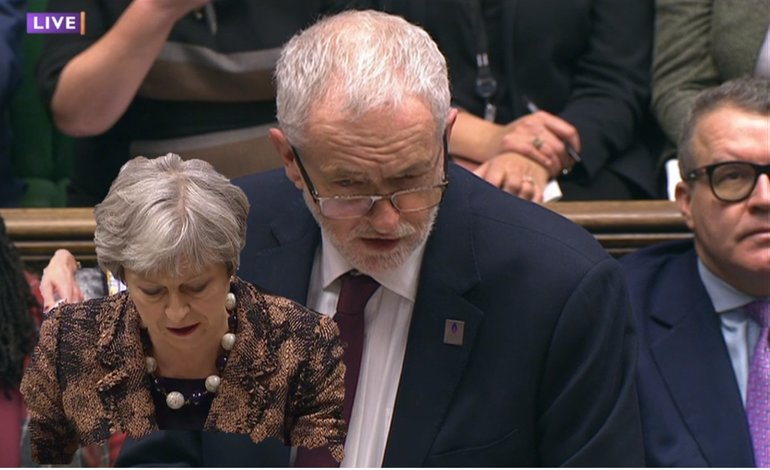 Jeremy Corbyn peppered Theresa May with questions on the NHS at Prime Minister’s Questions (PMQs) on 24 January. Under fire, the Prime Minister buckled – either repeating scripted responses or failing to answer at all.

The Labour leader started pointedly. He asked if May agreed with her own Foreign Secretary that the NHS needs £5bn of additional funding. A grinning May repeated the claim that her Chancellor had announced an additional £6bn of funding in the Autumn budget. But she failed to mention this will actually be two installments of £2.8bn spread over the next two years. This falls far short of the £4bn extra a year that NHS leaders say the health service needs to function properly.

Corbyn picked up on the omission immediately, telling May:

The only problem with that, Mr Speaker, is it was £2.8bn spread like thin gruel over two years.

And this opened Corbyn up to ask the unanswerable question:

Two weeks ago, the Prime Minister told the House: ‘It is indeed the case that the NHS was better prepared this winter than ever before.’

68 senior A&E doctors have written to the Prime Minister about what they describe as ‘very serious concerns we have for the safety of our patients’. They say patients being treated in corridors are dying prematurely.

Who should the public believe? The Prime Minister, or A&E doctors?

All May could offer was a rehash of her already debunked investment figures.

By contrast, Corbyn closed her off powerfully, demanding she “save the NHS from death by a thousand cuts”.

'Save the NHS from death by a thousand cuts' – @jeremycorbyn and @theresa_may clash over NHS funding at Prime Minister's Questions. #PMQs: The Verdict – https://t.co/8ZyGCwlDA3 pic.twitter.com/sgCGmE5JJn

May’s poor performance will likely do little to restore public confidence in her running of the Health Service. As viewers pointed out:

The last Labour government increased NHS spending by £5 billion a year, on average.

This Tory government have increased NHS spending by £2 billion a year, on average.

It’s worth remembering this when the Tories tell you it’s the fault of an ageing & expanding population. #PMQs

Theresa May starts talking about her proud NHS record And the entire nation rolls its eyes 👀 #PMQs #Toriesout pic.twitter.com/RZIIXjj975

– patients have died on trolleys in corridors

For govt to fail to run the health service & respond to the #NHScrisis is a serious abdication of responsibility to the electorate.

The NHS is in crisis for one reason: the government chose to underfund it, providing it with less money than it required. And the resulting crisis was entirely predictable. Responding to the government’s 10-year budget forecast in 2015, The King’s Fund warned:

They warned that this deficit between spending and costs, combined with other factors, would result in “the NHS is struggling to meet its obligations to patients”.

Each year, the Conservative Party is told that if it does not increase investment and reverse privatisation in the NHS, there will be a crisis. And each winter there is a crisis. Then, May’s Health Secretary Jeremy Hunt makes the same apology, and we repeat it all again the next year.

After nearly eight years of Conservative leadership, 44% of NHS trusts are in financial deficit. And by 2022, there is likely to be a funding hole of between £20bn and £30bn. This is not news. The government has been warned that its policies are creating catastrophe by the Chief of NHS England, health service unions, junior doctors, the Nuffield Trust [pdf], the Health Foundation [pdf], the King’s Fund [pdf], and others. But neither Hunt nor May has changed course.

And with Labour’s new offering on the NHS inspiring so many, this hubris could bring the Conservatives down.

These brave staff have told us what it’s really like on the inside of the NHS crisis. Make sure their incredible stories are heard – share this video. pic.twitter.com/TsYP6QDNou