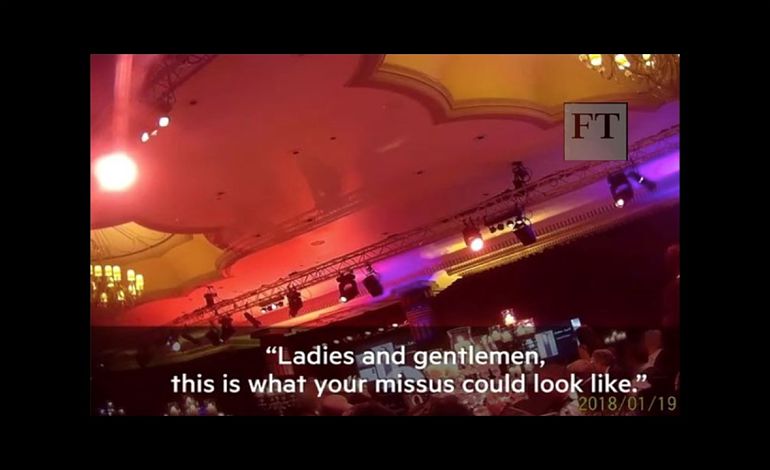 On Thursday 18 January, some of London’s wealthiest gentlemen assembled for the 33rd annual Presidents Club Charity Dinner. The men-only event was attended by senior politicians and business leaders, and hosted by comedian David Walliams. A courageous undercover investigation by Financial Times journalist Madison Marriage drew back the curtain on this carnival of horrors. But while revealing endemic levels of sexism, sexual harassment and abuse, the report failed to mention the elephant in the room. Privilege.

Each year at the Presidents Club Charity Dinner, charities court rich and powerful men for their cash. In return for donations, organisers offer guests access to attractive young “hostesses” and a tantalising assortment of auction lots. This year, the club held its secretive event at the Dorchester Hotel on Park Lane, and auction prizes included:

Agency Artista recruited hostesses on the basis of being “tall, thin and pretty”. And on the night, these women were paraded into the event like prize cattle. All while Little Mix’s song Power played over speakers. Ironically, the lyrics include:

Hold up, no you didn’t bow, bow
I ain’t the chick to walk behind you around town
Just cause you’re packin’, packin’, whoop, down south
That don’t mean I’m ever gonna take it laying down, baby

Posing as a hostess, FT journalist Madison Marriage gained access to the event. She saw (often married) male guests molest the bums, breasts, backs and hips of hostesses. Guests also repeatedly thrust their hands up the skirts of their hostesses, pulled them onto their laps, and invited them back to their rooms.

The most telling part of Marriage’s entire report is a quote from Artista founder Caroline Dandridge, who told the FT:

This is a really important charity fundraising event that has been running for 33 years and raises huge amounts of money for disadvantaged and underprivileged children’s charities. There is a code of conduct that we follow, I am not aware of any reports of sexual harassment and with the calibre of guest, I would be astonished.

Clearly, Dandridge is deluded. Because with ‘bear shits in woods’ predictability, the guests behaved exactly like rich men do at alcohol-fuelled privilege parades. Like a bunch of entitled w*nkers. Entitled to their wealth, entitled to their power, and entitled to the bodies of the hired help. Dandridge shouldn’t be “astonished”, she should be dizzy with déjà vu. Because this nonsense happens on the regular.

We’ve seen it at the Tory party’s annual ‘Black and White Ball’ where rich people exchange cash for access. And let’s not forget the Bullingdon club where wealthy, connected, male Oxford University students smash up restaurants and get their privileged parents to pay the bill. Former prime minsters, chancellors and current Foreign Secretary Boris Johnson belonged to this club. BBC broadcasters like David Dimbleby belonged to this club. These are the playgrounds and networks of our establishment. And this establishment owns almost everything that everyone else produces.

Right now, the richest 1% hold 82% of the wealth. And everybody else is duking it out for the scraps. Instead of much-needed social and economic transformation, we have the charity sector. Instead of wealthy people paying their taxes, they do philanthropy; exchanging donations for superstar treatment. Then they want their arses kissed for doing so.

What happened at the Presidents Club Charity Dinner is not shocking. And that’s the story. This pantomime of privilege is the perfect metaphor for our morally and literally bankrupt economic system. This isn’t about tittle tattle, it’s about inequality. Gender inequality, wealth inequality and class inequality – an unholy trinity of privilege and prejudice. So while Madison Marriage did great work uncovering the trees, she failed to point out the wood. And it’s the wood that needs to go. Because when we allow these types of incidents to be dismissed with hand-wringing apologies, we leave the systems in place that make repeat occurrences inevitable. The cycle continues.

The club has clearly been rattled by the exposure of its activities, as it has announced it will be closing. But if we want real change, we have to break the cycle of unaccountable privilege. And we cannot do that without acknowledging its existence in the first place.

– Learn more about creating a fair, prosperous and sustainable economy at Positive Money.