Inside the crazy, shady, world of the Tory fundraising ball - Canary Workers’ Co-op 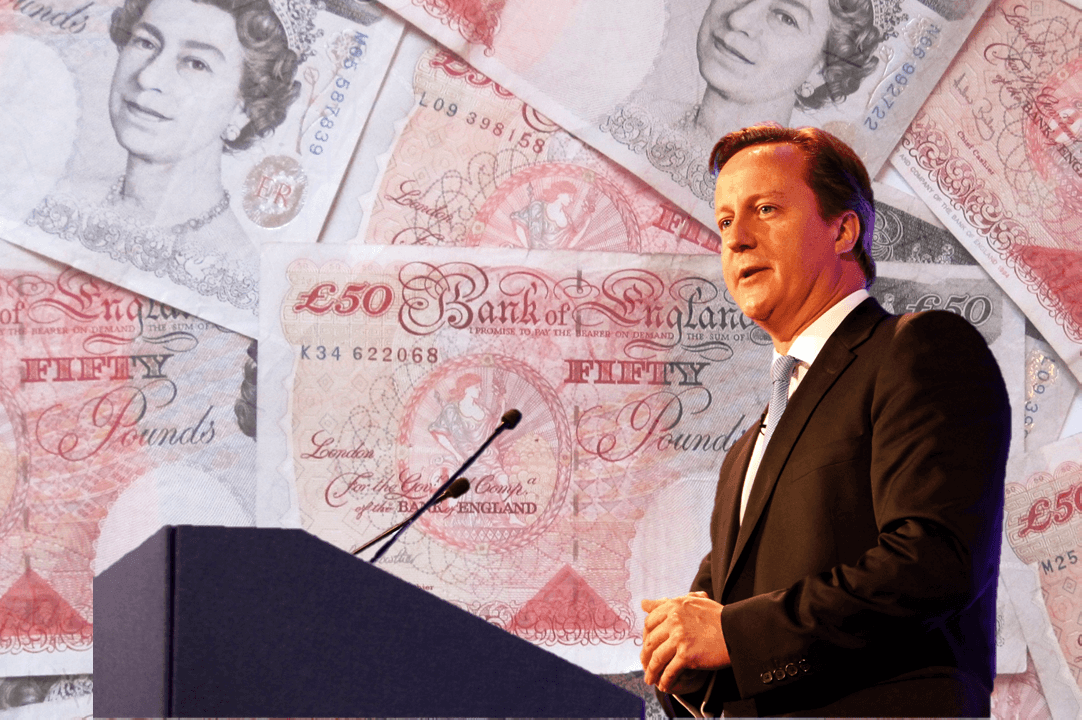 As top Tories gathered to rub shoulders with big-money donors, one media commentator suggested the fat cats must be feeling the pinch, as the money raised was “more like a church auction”. A church auction where £35,000 gets you a day with a London Mayoral candidate maybe. Scratching the surface of the glamorous Black & White Ball reveals the mechanisms of power and money that keep the Conservative Party ticking.

The annual party is a fundraising event that brings together senior Tory politicians with some of their most wealthy and influential backers. After all, the Conservative Party is even more expensive to run than its own officials always admit. David Cameron delivered a speech and his wife Samantha drew the raffle. Diners paid between £500 and £1500 per head for a sumptuous three-course meal and wines. Of course, the refreshments were but a sideshow. Those who could afford £15,000 for a ‘premium’ table for 10 were guaranteed to find a cabinet minister sitting at it. The middling sort on the £10,000 tables had to be content with a middle-ranking minister. Standard tables at £5,000 came with nothing more than a junior minister, or even a backbencher.

Those of us unlikely (or wanting) to attend such a function can only guess at what was discussed over dinner. No doubt everything was strictly off-the-record, as usual. Ministers leaving the venue gave no clues, having succumbed to selective amnesia. The Spectator magazine’s resident tattle-tale ‘Steerpike’ managed to get in and file a live blog, but this doesn’t give us a great deal of substance either. Rather, Steerpike bemoans the quality of the auction lots and the “paltry sums” raised, suggesting that depressed commodity markets and oil prices are the reason it is an “oligarch-free zone”. “Either that, or,” he says more ominously, “they think ten years of Tory government are in the bag.”

It’s certainly true that some of the more run-of-the-mill lots failed to generate much excitement – a £1,000 Kurt Geiger voucher went for £1,020 – but interest pricked up for the more political items. One lot of four election posters fetched £50,000, although it should be pointed out that two were signed by Cameron, one by John Major and one by Margaret Thatcher. Perhaps the most notable lot was the ‘Back Zac Pack’. The lucky winner bid £35,000 to spend a day on the campaign trail with Conservative candidate for London Mayor, Zac Goldsmith. The trail does break off for lunch (with party chairman, Lord Feldman) and tea (at The Ritz with House of Cards writer, Lord Dobbs) so it’s unclear quite how many doorsteps the intrepid campaigners will be able to visit. Steerpike speculated that the winning bidder may have had an ulterior motive:

This seems to be the only lot offering access to a politician. Is this part of a drive to clean up politics or an attempt to avoid the widespread ridicule hurled at last year’s plum prizes? Unless they’ve managed to wriggle out of the deal, some of 2015’s winning bidders faced the prospect of shoe shopping with Theresa May, a “hearty weeknight roast chicken” with Michael and Sarah Gove, and an early morning 5k run with Nicky Morgan. Those weren’t necessarily the worst – there was also a “10k Iron Man Endeavour” with Iain Duncan Smith. Unless his campaign goes spectacularly badly, Goldsmith is unlikely to endure such cringing embarrassment as his colleagues. However, his willingness to be ‘bought’ for £35,000 is surprising for a politician who once said, “I can’t be bought”.

The real money was operating behind the scenes. The event’s headline sponsor was Shore Capital, whose founder, Howard Shore, is regarded as one of Cameron’s earliest backers. One of Shore Capital’s directors, Dr Zvi Marom, has a background in the Israeli Navy and close ties to the Israeli government’s funding of high-tech companies. Prestigious private bank Arbuthnot Latham took a, no doubt pricey, full page advert in the auction brochure. Arbuthnot is majority-owned by Sir Henry Angest, whose donations to the Tories have attracted attention in the past. He also runs a high-interest loans company but felt sufficiently generous to give the Conservative Party very favourable terms on a £5m loan for their 2010 General Election fighting fund. Sir Henry’s tentacles have previously spread somewhat beyond Cameron’s party. He has funded various Eurosceptic groups, including ones with links to UKIP, and supported climate change scepticism and aggressive free-market deregulation. He has even appeared to seek undue influence over a university study of Scottish sporting estates.

Beyond the glitzy, and occasionally goofy, façade of the Black & White Ball, this is the kind of culture that is close to the heart of the Conservative Party. It’s a world where money is thrown around like confetti, but there’s always an expectation of something in return. Until this cosy patronage is removed from British politics, our governments (and our oppositions) will have a harder job convincing us they speak for our concerns.

If you want to avoid accidentally funding the Conservatives, here’s a handy guide.

Support independent journalism like The Canary, rather than media owned by party donors.