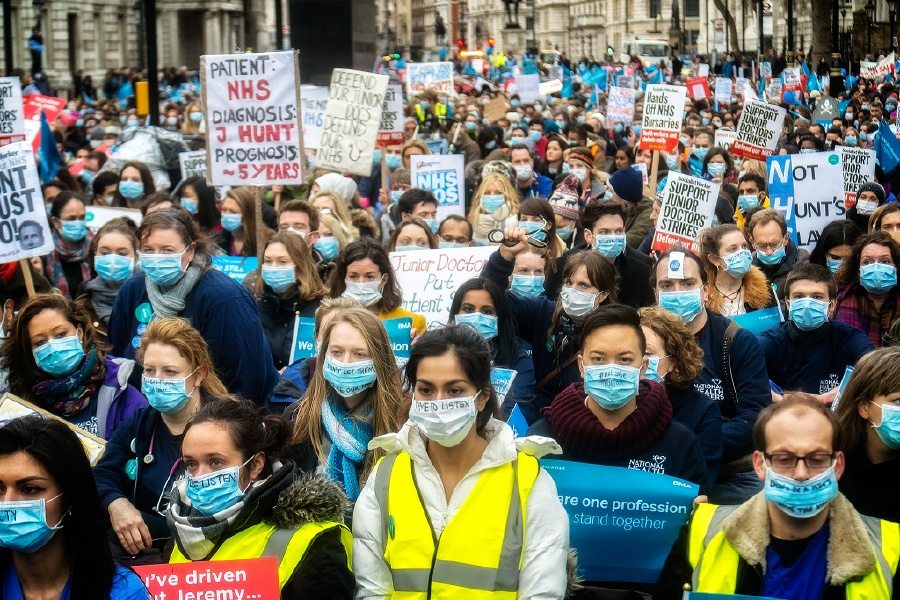 junior doctors cannot and will not accept a contract that is bad for the future of patient care, the profession and the NHS as a whole, and we will consider all options open to us.

Possible actions include an ‘all-out strike‘, in which even emergency areas of care would not be covered (as they have in the previous two strikes). At the same time, the BBC reports behind-the-scenes talk of “legal action, mass resignations and doctors refusing to sign contracts”.

Hunt’s planned imposition of the contract in question has been called “dictatorial” by Shadow Chancellor John McDonnell. And Chair of the Royal College of GPs, Dr Maureen Baker, has said the Health Secretary’s attitude is “wrong-headed” and “may damage patient care”.

Indeed, asserts Nick Triggle at the BBC, this is “uncharted territory”. Never before has a Health Secretary imposed an entire new contract on doctors in such a fashion. In the opinion of Chris Ham, chief executive of the King’s Fund think tank:

For the junior doctor committee chair of the BMA, Dr Johann Malawana:

The decision to impose a contract is a sign of total failure on the Government’s part.

Malawana claims the decision has left a whole generation of junior doctors without any trust in the Health Secretary. This situation has been worsened, he says, by the fact that politicians in other parts of the UK have chosen a “constructive path on junior doctors’ contracts”. Only Hunt has decided to take a confrontational approach on the issue. ” Insists Malawana,

This is clearly a political fight for the Government.

And this allegation of ideological inflexibility is unsurprising, given that Hunt co-wrote a book advocating the privatisation of the NHS back in 2005.

If Hunt and his colleagues are allowed to get away with their ‘bullying approach, according to Malawana,

it will no doubt seek to do the same for other NHS staff.

For this reason, he leaves the following message for the government:

junior doctors cannot and will not accept a contract that is bad for the future of patient care, the profession and the NHS as a whole

If we also oppose the Health Secretary’s authoritarian approach towards the junior doctors, we must stand alongside them, now more than ever.

-For a brilliant summary of the issues surrounding the junior doctors’ strike, see this video posted by James Rawson on Facebook.
-Pressurise Jeremy Hunt via Twitter to scrap the new junior doctors’ contract and sign this official petition against it.
-Follow the hashtag #IstandwithJohann on Twitter and show the junior doctors your solidarity in whatever ways you can.
-Join Keep Our NHS Public (KONP).
-Support the campaign to prevent the Transatlantic Trade and Investment Partnership (TTIP), a treaty that will open the NHS up to total privatisation.
-Assist 38degrees in its campaign to mobilise support for public healthcare.
-See the six steps that need to be taken to save the NHS here.