Gravitational waves: what’s all the fuss about? - The Canary 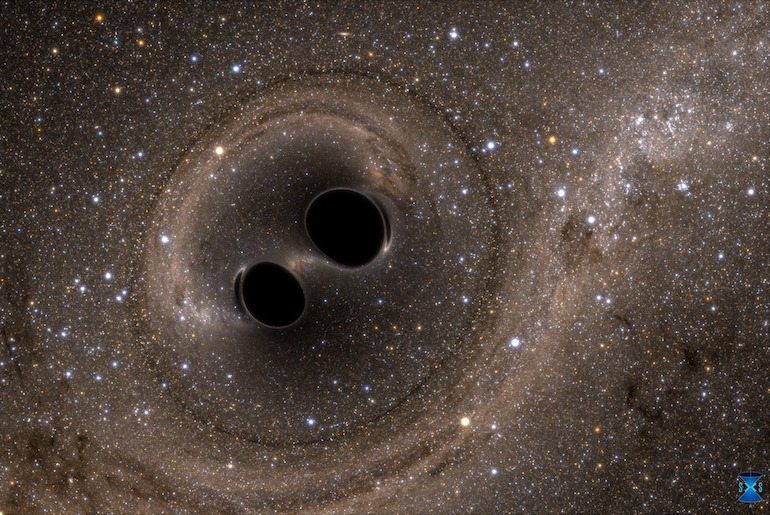 This week, scientists at the Laser Interferometer Gravitational-Wave Observatory (LIGO) announced a huge discovery: they had detected gravitational waves – ripples in spacetime. The science world exploded with excitement (and cake – a little prematurely). But why is it such a big deal?

When scientists are studying the very first moments after the big bang, it’s difficult to see through all the chaos of the first 400,000 years. Since gravitational waves have been produced from the moment the universe was created, studying them gives scientists a new view of the early universe – one they didn’t have previously.

Gravitational waves provide a completely new way of looking at the universe.

Einstein predicted gravitational waves a century ago with his theory of general relativity, so why has it taken so long for scientists to prove he was right?

The simple answer is because they’re tiny. Drop a stone into water and you’ll see ripples moving outwards, away from where the stone landed. Now imagine the stone is something huge, like a black hole, accelerating through space. The waves that move outwards are gravitational waves, and they’re moving at the speed of light.

Something relatively close to Earth – say four light years away, roughly the distance to our closest star – would only produce waves a tiny fraction of the width of an atom. And even then, it would have to be something much bigger than a normal star to make a wave.

So scientists had to wait until a big enough event happened: two “intermediate-sized” black holes merging.

The black holes were each about 150 km (90 miles) across, 30 and 35 times the mass of the sun and shooting through space at half the speed of light – 1.3 billion light years away from Earth. They spun around each other until coming together “like two soap bubbles in a bath.” This produced waves of pure energy, which the scientists detected.

The LIGO scientists converted the gravitational waves into sound waves so we can hear them, producing the “heartbeat of the universe”. At the press briefing on Thursday, Gabriela Gonzalez, LIGO’s spokeswoman at Louisiana State University, said:

How they did it

The LIGO team detected the waves months ago, and have since been analysing their findings. Their paper, published in Physical Review Letters, announces starkly:

On September 14, 2015 at 09:50:45 UTC the two detectors of the Laser Interferometer Gravitational-Wave Observatory simultaneously observed a transient gravitational-wave signal.

The paper itself shows the scale of the research behind the discovery: it lists 1004 authors, all of whom contributed to the breakthrough.

The LIGO labs where the waves were detected are state-of-the-art observatories with equipment called laser interferometers. The lab at Livingston in Louisiana caught the waves first, followed by the lab at Hanford, Washington State, seven milliseconds later.

The detector had been switched off for some time, and by sheer coincidence, the team had just switched it on when they noticed the signal, making this not only one of the most important, but also one of the luckiest discoveries of the last century. (First Dog on the Moon says “science should go out and buy a lottery ticket right now!”).

Einstein was right… for now

The discovery supports the prediction Einstein made when he published his theory of general relativity in 1915. Scientists have spent decades trying to prove his theory by looking for gravitational waves, and now they’ve made the first step it highlights just how beautiful Einstein’s equations are.

Although Einstein’s equations are famously complicated, they are the simplest equations he could have come up with, given all the constraints he had to satisfy. It is remarkable that nature didn’t add in even more complexity. But the equations are what they are, and they’re beautiful.

It’s not the end of the story, though. The LIGO team think they detected more waves a few weeks after the first, but they need to finish analyzing the evidence. They’ll need to collect many more examples before getting a complete picture of what gravitational waves look like, and this is likely to involve collecting data from equipment in space. Depending on what they find, this could start to show defects in Einstein’s equations.

Still from a computer simulation of the collision of two black holes. Credit: SXS.