ISIS is a sideshow, this is who we are really after - The Canary 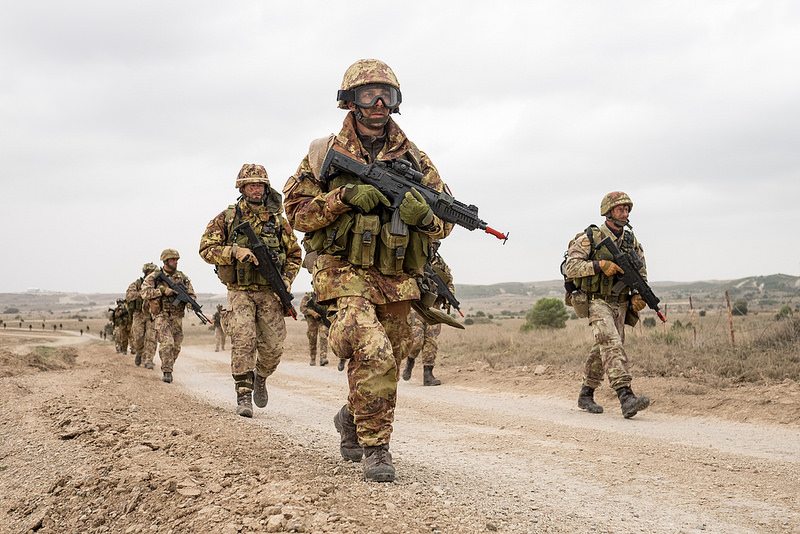 Defence news hitting the headlines recently almost entirely relates to terrorism. In particular, the threat of ISIS (Daesh). This is despite the fact that Daesh have a mere 30,000 fighters combined, in all of their strongholds. Less frequently acknowledged is that there is another army, some 850,000 strong, that NATO has just taken a decisive step towards provoking. This should be big news, and has huge ramifications for the world. But, it has passed with barely a front page flutter.

NATO Defence Ministers agreed on an enhanced forward presence in the eastern part of our Alliance.

This is NATO-speak for a decision to amass a military presence in six countries bordering Russia. The UK will contribute five warships and a considerable number of troops to the military contingent. NATO’s pledge follows an announcement by US President Barack Obama to quadruple their military spending in Europe, to the tune of $3.4 billion. Obama explained his decision:

It is clear that the United States and our allies must do more to advance our common defense in support of a Europe that is whole, free, and at peace

Missing from Obama’s justification is the fact that Europe cannot be at peace if this NATO plan goes ahead. NATO has a longstanding agreement with Russia that permanent troops will not be stationed on its borders. NATO is circumventing this arrangement by categorising the initiative as follows:

It will be rotational and supported by a programme of exercises; and it will be complemented by the necessary logistics and infrastructure to support pre-positioning and facilitate rapid reinforcement

But it is unlikely that Russia’s concerns will be quelled by the ‘rotational’ nature of the military contingent. In fact, Alexander Grushko – Russia’s envoy to NATO – has already warned that if the initiative goes ahead, it “can’t be left without a military-technical answer”. Grushko did not elaborate on what he meant by this, but it does not bode well for a Europe “at peace”.

In western media discourse, the current tensions between Russia and NATO are mainly attributed to the Ukrainian crisis that erupted in 2014. The blame for the chaos in the Ukraine has been firmly placed on Putin’s shoulders, and the country is decried as “a revisionist power capable of military aggression”.

Some rarer commentators draw different conclusions. Seumas Milne, Labour’s Executive Director of Strategy and Communications, wrote about the Ukrainian crisis in the Guardian:

The reality is that, after two decades of eastward Nato expansion, this crisis was triggered by the west’s attempt to pull Ukraine decisively into its orbit and defence structure, via an explicitly anti-Moscow EU association agreement.

However, despite this complexity, where degrees of culpability lie with many parties, western media continue to basely point the finger at Russia. This reduces the possibility of realistic solutions through diplomatic channels, that take all parties concerns, and interests, into account. Renowned investigative journalist John Pilger identifies clearly where this lack of objectivity may lead:

The world is facing the real possibility of major war, perhaps nuclear war, with the United States clearly determined to isolate and provoke Russia, and eventually China. This truth has been turned upside down, inside out, by journalists.

This half-baked reporting on the reality of the situation in Ukraine, has been compounded by regular stories on Russia’s threatening military activity. Vice Admiral Clive Johnstone, Commander of NATO’s Maritime Command, recently revealed to the press that there is now

The New York Times highlighted a surprise military exercise in Russia’s southern region, that they frame as “a move that appeared intended to unnerve neighbors”. The Guardian published a truly hysterical claim that Putin aims “to foster the EU’s disintegration”, and that the threat from terrorist groups “do not compare with the threat emanating from Russia”. Certainly, Russia has fearsome military might, and could be a huge “threat” in armed conflict. But suggesting that aggression is solely “emanating from” Russia is not true, as NATO’s Russian border build-up proves.

And these are just stories from the last two weeks.

Rarely though, do we encounter such alarmist reports about our own aggression. The news of airborne military drills staged by NATO in 2015, which were the largest since the end of the Cold War, is calmly conveyed. The reporting on naval drills happening in September 2015, involving some 2,500 troops from 11 NATO-aligned countries, is scribed without even an exclamation mark. These exercises were in Ukraine, as were these, these and these. That’s big news for Russia, even if it’s not reported as such at home.

It is the equivalent of Russia making an agreement with the SNP, in an independent Scotland, to stage military exercises in the Highlands. That would certainly make the front page in the UK.

One minute to midnight

One of NATO’s key principles, as a military alliance, makes clear that:

This principle was stressed by Stoltenberg in his comments on the new “enhanced forward presence”.

Turkey – a NATO member – has an increasingly hostile relationship with Russia. The tensions between them reached a fatal level in November 2015, when Turkey shot down a Russian military plane. Turkey claimed the plane had breached its airspace. However, shortly before the incident, Putin had attended the G20 summit and supposedly shared intelligence which implicates 40 countries – including G20 nations – in the financing of Daesh. Although he did not publicly reveal the names on this list, it is highly likely Turkey is on it. Putin’s remarks, on Turkey’s downing of its plane, say as much:

today’s loss is a result of a stab in the back delivered by terrorists’ accomplices.

Russia has placed sanctions on Turkey as a result, and the relationship between the two is on a knife edge. Turkey has claimed more airspace incursions, and if it shoots down another plane, Russia will respond. But with this latest NATO move, that would propel the Alliance as a whole to respond to Russia – from its borders.

This sort of climate is dangerous. It is the perfect storm for events spiralling out of control. Of course, defence companies will be raising glasses at the mere thought. Trident advocates will use it as ammunition for their cause. But as General Lee Butler, former head of the U.S. Strategic Command, warned:

it is a near miracle that we have escaped destruction so far, and the longer we tempt fate, the less likely it is that we can hope for divine intervention to perpetuate the miracle.

He’s right. Responsibility demands we condemn these fatal decisions, before this new Cold War heats up and reaches explosive proportions.

Take action with Veterans for Peace in their non-violent campaigns

Support The Canary so we can report important news