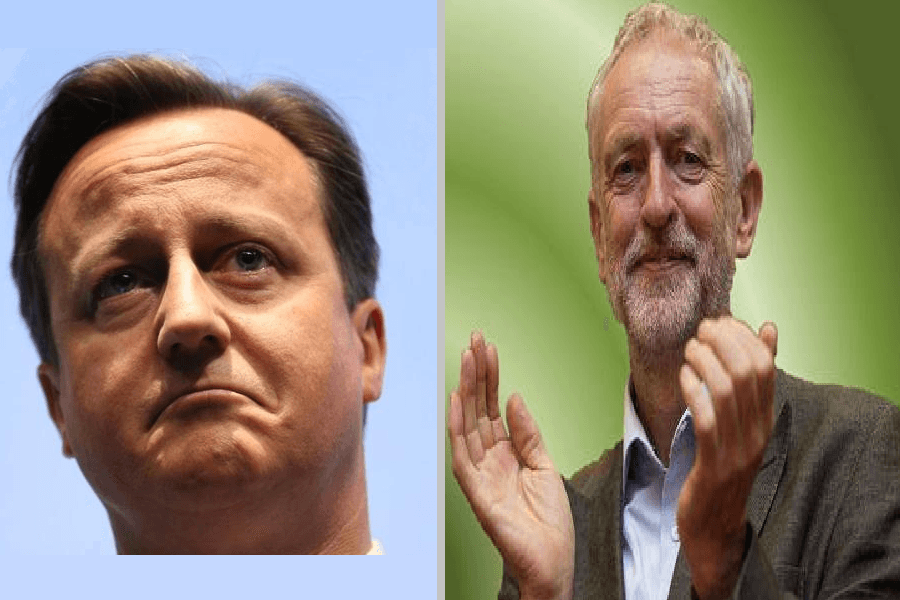 Jeremy Corbyn’s EU propositions knock David Cameron’s so-called deal out the park. Corbyn says he wants to push for “a real social Europe” by staying in the EU. Meanwhile, Cameron’s deal doesn’t even mention the real problems facing Europe, and even falls flat on addressing the supposed issues it challenges, like immigration.

But we also want to see progressive reform in Europe: democratisation, stronger workers’ rights, sustainable growth and jobs at the heart of economic policy, and an end to the pressure to privatise and deregulate public services.

This means strong opposition to the type of treatment Greece received after the financial crisis, at the hand of the troika (the European Commission, the European Central Bank and the International Monetary Fund). Make no mistake, this bailout was not for the Greek people. Money went to the country’s banks and foreign creditors with a mere 11% going to to the Greek state. It was a transfer of debt from the private to the public sector. The Greek people shouldered the risk of the bank’s excessive lending, which caused the crisis in the first place.

This is the Europe Corbyn wants to reform – the Europe of privatised profit, and socialised losses.

The austerity programme shoved down the throats of the Greek people has been disastrous. The shockingly high 26% general unemployment level is even overshadowed by 59% of youths being out of work. By 2012, 11% of the population where living in ‘Extreme Material Deprivation’, meaning no heating, electricity, and not enough food.

The Greek economy has shrunk every year since the Greek government took the Trojan horse loan: containing inside unsustainable, economically illiterate and immoral austerity measures.

an end to the pressure to privatise and deregulate public services.

This does not just mean standing up to the troika, but also opposing the ‘free-trade’ deal TTIP. Corbyn has expressed vehement opposition to TTIP in parliament:

Should we not instead be demanding a free trade agreement that narrows the gap between the rich and the poor, that protects the advance of public services such as the national health service, that fundamentally protects food production, and that ensures that the best standards become the universal standards, rather than engaging in a race to the bottom that results in the worst standards becoming the norm on both sides of the Atlantic? I hope that the House will reject TTIP.

TTIP  is a trade deal that abolishes EU regulation, meaning we adhere to American standards of ‘free-trade’. This entails getting rid of environmental and health regulations, which are designed to protect the European public.

Angela Merkel was taken by huge surprise by the biggest protest Germany has seen “for many, many years” last October. According to the organisers, 250,000 people took part in the demonstration against TTIP.

Privatisation isn’t just about who runs a service, it’s about who services are accountable to. It’s about who shares the rewards, about protecting the workforce and getting a good deal for local people who use the services.

Governments like bringing in the private sector because it adds an extra layer of protection for themselves. It removes their accountability from the institutions, enabling them to blame the private sector if things go pear-shaped.

However, this often does not benefit the interests of the public they are supposed to represent. For example, privatised railways are the worst deal possible for the people. This is because the fundamental argument for privatisation falls apart. There can be no competition when it comes to railway services –  a company cannot just decide to build a new track smack bang across a city.

Railways are a natural monopoly, meaning the private company can cut back spending to increase profits, at the expense of passengers and staff, with no backlash whatsoever. Companies can also hold the country to ransom, because we need to travel. Hence, the obscene subsidies we pay to private railway companies here in Britain. First Scotrail received a train subsidy of £525m in 2012, and Arriva Trains enjoyed a hand out of £349m in the same year.

We will give councils greater freedoms to roll back the tide of forced privatisation. That’s what’s been happening across Europe – where scores of cities across our continent have been taking water, energy and other services back into local public ownership.

Former Greek Finance Minister Yanis Varoufakis just launched a pan-European movement against austerity and the concentration of power within the EU called ‘DiEM25’. He said:

Our medium-term goal is to convene a constitutional assembly where Europeans will deliberate on how to bring forth, by 2025, a full-fledged European democracy, featuring a sovereign parliament that respects national self-determination and shares power with national parliaments, regional assemblies and municipal councils.

This is the type of Europe we should be pushing for.

Now onto Cameron’s so-called EU deal. It is a total charade to make himself seem Prime Ministerial. He wants to appear like he’s getting a good deal for the British people, in the hope that it will encourage them to vote to remain on his terms.

Central to his deal is the ‘red card’ that would enable us to block EU legislation. It requires 14 member states to vote to oppose the EU law, in order for the red card to be implemented.

However, back in 2008 Cameron’s shadow foreign secretary William Hague can be seen mocking the idea, stating categorically that achieving a red card would be impossible:

Given the difficulty of oppositions winning a vote in their parliaments, the odds against doing so in 14 countries around Europe with different parliamentary recesses – lasting up to 10 weeks in our own case – are such that even if the European Commission proposed the slaughter of the first-born it would be difficult to achieve such a remarkable conjunction of parliamentary votes.

Cameron’s brilliant deal couldn’t even stop the “slaughter of the first-born”. Cameron can be seen laughing in the background, apparently agreeing the idea is ludicrous.

Rather than focusing on the corporations who should be paying people more, Cameron also wants to freeze in-work benefits for migrants, leaving them to live in poverty. This is discriminating against people because of their nationality, rather than tackling low-paying companies.

Cameron claims this will “make a difference” to levels of immigration by ending a significant “pull factor”. Yet, there is no evidence for this whatsoever. Findings from Migration Watch UK show that people in the UK earn four times as much as they do in Poland

Immigration is a byproduct of polarised global capitalism, and nothing can stop it happening unless we want to establish an authoritarian closed-off nation. Concentration of wealth and resources leads to a concentration of people

Besides, immigration is convenient scapegoating. As we have seen in Greece and here in the UK, austerity is the real culprit for our falling living standards and squeezed public services.

Cameron’s proposals do nothing to address the real problems within Europe. In fact, Cameron wants to exacerbate them. He avidly supports TTIP and the removal of ‘red tape’. Cameron thinks abolishing environmental and health regulations is a good thing.

Corbyn, meanwhile, wants to stand up for workers rights, public ownership and accountability. He wants to mediate the overwhelming power of the troika, oppose austerity and bin the corporate power-grab TTIP.

Corbyn is the clear winner here.

-Help to stop the Transatlantic Trade and Investment Partnership (TTIP).
–Support the Canary so we can continue to bring you the context that matters.

–Write to your MP, asking if they support TTIP.