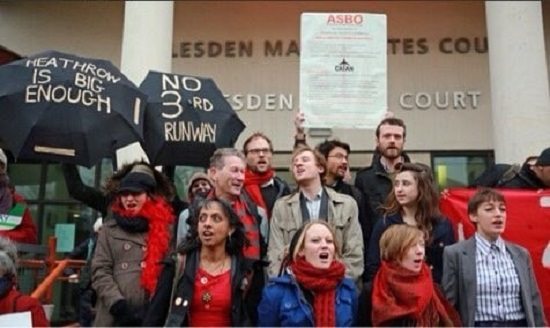 On 20 January, 13 climate change activists were found guilty of aggravated trespass. They had all taken part in a six-hour occupation of the north runway of Heathrow airport to protest against the proposed development of a third runway.

Despite a wealth of evidence submitted to the court, including testimonials from climate scientists, local residents, and other experts, they were found guilty. District Judge Deborah Wright told the thirteen it was “almost inevitable” they would be sent to prison, citing the “astronomical costs” of the action.

Here are four reasons why she is wrong, and these people should not be jailed:

1.  These people are not criminals

They did not take these actions for personal gain, but because they care deeply about the planet and the impact climate change is having, and will have, in the future. Two of the defendants are climate scientists, and others have backgrounds in environmental protest and law. Some are local residents who have experienced first hand the health risks associated with living near the airport.

This wasn’t an action they undertook lightly, they knew the risks involved, but also having campaigned on climate change issues for many years, believed this action to be necessary. Indeed, scientific evidence presented at trial showed that preventing a flight could be the most significant action a person could take to reduce emissions.

Even the judge conceded that they were all “principled people”. Speaking about the case, Green MP Caroline Lucas, commented:

Sending the Heathrow 13 to prison would be utterly unwarranted. They took a principled and non-violent stand against the colossal environmental cost of expanding an airport that already breaches air pollution laws – yet they’re being treated is if they are somehow a danger to society.

The real danger we face are the toxic fumes emitted by airports and the looming threat of catastrophic climate change. Sending these committed activists to jail would be deeply unjust.

2. It would be disproportionate

Whilst all those involved in the action knew there was a risk of being sent to prison, a custodial sentence would still be disproportionate to the offence committed. The Criminal Justice Act 2003 states that prison should only be an option when the offence “was so serious that neither a fine alone nor a community sentence can be justified for the offence”.

Furthermore, the Sentencing Council asserts this means that “the clear intention of the threshold test is to reserve prison as a punishment for the most serious offences”. This is clearly not the case for thirteen “principled” people who were acting out of genuine belief and desire to create a better world. Ten out of the thirteen have no previous convictions.

Whilst there have been previous custodial sentences given for aggravated trespass – most recently, the Love Activists were jailed for an occupation of a building in Liverpool –  it is extremely rare. Similar environmental protests usually end with either conditional discharges  (basically meaning no further action is taken unless another offence is committed in the time period), or small fines. For example, six activists from Plane Stupid who blockaded Manchester airport were convicted of aggravated trespass in 2011. The five who had no previous convictions were given two-year conditional discharges, whilst the one person who did was ordered to do 80 hours of community service.

Mike Schwarz, a solicitor from Bindmans, who is representing nine of the Heathrow defendants said:

A custodial sentence would be excessive and wrong because there is a long history of recognition by senior judges that an allowance should be made on sentencing for peaceful protests of public importance.

3. The cost of the protest

The judge has made it clear that one of the reasons why these protesters should be sent to prison is because of the “astronomical cost” of the protest.

Firstly, it is unclear exactly how much the protest cost, with airport police at the time estimating it was around two million. And, whilst there were delays to flights, at the time, Heathrow was keen to stress that the airport remained operational throughout the protest.

Secondly, and more importantly, protest of any description costs money and causes disruption. For example, a legally organised march costs money for policing, and causes huge disruption through road closures – leading the police to unsuccessfully try to get organisers to pay some of the bills for protests last year.

Other examples of protest costs include £12.8 million for the policing of the Tamil protests in 2009 and nearly £6 million spent on the Kingsnorth climate camp.

Any protest is expensive for corporations. EDF claimed activists who occupied one of their gas-fired power plants cost them £5 million but were forced to drop their claim for compensation against the protesters, due to public pressure. An occupation of Coca-Cola in 2003 was estimated by the company to have cost them £30,000, but no charges were brought against the protesters involved.

Despite the cost, freedom to protest is recognised a fundamental right in any democracy. There is a long and proud history of direct action in environmental protest in the UK. Last month was the twentieth anniversary of the anti-road protests at Newbury where protesters set up protest camps to attempt to stop the construction of a new bypass. This protest cost £25 million in private security and £5 million in policing.

All these protests cost vast amounts of money, and caused disruption, but those involved were not held liable for these costs. There has not been evidence presented as to the exact cost of this protest, and sending people to jail based on an arbitrary cost, especially given the examples of the cost of protest above, is a ridiculous and unprecedented judgement.

4. Prison is not a deterrent

Sending these people to prison will not achieve anything. It will not stop the people involved protesting and taking action. In fact, several of those facing jail time have already said that a custodial sentence will make them more determined to take action in the future.

Nor will it deter others from taking action. Whilst those taking part in this type of action know they are risking prison, as the Network for Police Monitoring point out, this case is still unusual and shouldn’t be taken to assume that all those taking part in similar protest will be jailed:

Unless there are other mitigating circumstances such as a string of previous convictions for violence, the overwhelming majority of protesters found guilty of offences such as obstruction of the highway or aggravated trespass are unlikely to face imprisonment and most will receive a conditional discharge.

Furthermore, all the judge has done in asserting her intention to send these people to prison, is to generate a huge amount of publicity for their actions. Not only has this raised the profile of the issues around climate change, aviation and the expansion of Heathrow, it has raised the profile of environmental direct action.

It is essential that we support the 13, and remember the real victims of climate change around the world. These people should not be sent to prison, and we all have a responsibility to take a stand both on climate change and to support those who have their liberty threatened.

This is the second in a series of articles following this case. See here for the first.

Sign the petition to say you don’t support the jailing of the Heathrow 13.

Come to court for the sentencing on 24 February and join in the protest outside in solidarity with the 13.

Find a local group, and get involved in protesting the aviation industry. Show we won’t be deterred by these prison sentences.