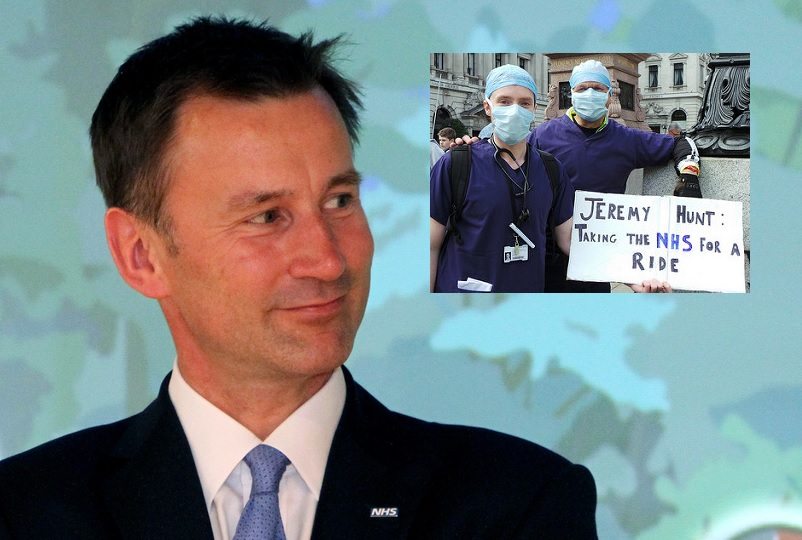 A reception with Jeremy Hunt, the embattled Health Secretary, was reported cancelled on 12 February. The drinks and canapés fundraising event was organised by Fareham Conservatives, and had garnered attention from junior doctors on social media. Following rumours that doctors may attend and use the opportunity to confront Hunt, Fareham Conservatives posted a cancellation message on their website.

But it seems that message was for doctors’ eyes only, because the event went ahead – with only pro-Hunters present.

Because of the very real threat of disturbance from groups circulating details of our planned reception with Jeremy Hunt, the advertised event was cancelled on security grounds. A smaller private event for party members to meet Mr Hunt was held instead at another location.

The controversial rearrangement followed a timing alteration earlier in the day for a visit to Fareham Community Hospital. Hunt’s visit was reportedly moved forward an hour to avoid protestors attending.

The idea that public officials should coordinate appearances so they never actually face the public is absurd, but it is not surprising in Hunt’s case. The Health Secretary has tried to avoid confrontations over his flawed plans for new junior doctor contracts wherever possible – even in parliament.

This is because his plans are unworkable, as he has failed to hammer out any reasonable agreement with British Medical Association during negotiations. Peter Brookes amusingly illustrates why here:

Hunt’s complete inability to engage with the sector he is charged with controlling has now seen him attempt to impose the contracts on junior doctors. This is an unprecendented step, and the contract will not be forced on doctors without a fight. But it does highlight uncomfortable truths about the Health Secretary, and his lack of suitability for the role.

The way in which doctors were blocked from attending the drinks reception with Hunt also speaks volumes. According to Portsmouth News, GP Emma Nash said:

to tell us it was cancelled and go and have it at Fareham college is deceitful. How are we supposed to have any kind of faith in somebody who deliberately manipulates their way out of seeing us?

Deception of this kind should have no place in politics, and increasingly it seems that neither should Jeremy Hunt. He lacks the skills to find common ground and understanding with the sectors he’s meant to support. He shows a complete lack of faith in his own policies when he avoids debate rather than embracing it. And his methods of eluding scrutiny expose a disturbing scarcity of respect for medical professionals and the general public.

No wonder over 280,000 people have signed a petition calling for the Health Secretary’s removal from office. The petition notes Hunt’s demoralising impact on NHS workers and his recent comments advising people to Google medical symptoms as grounds for no confidence. Since its creation on 11 February, the petition has gained about 6,000 signatures an hour. It has far surpassed the threshold of 100,000 signatures needed for it to be debated in parliament.

Whether the petitions committee will agree to debate the plea is not yet known. But if it does go ahead, Hunt will finally face the scrutiny he’s been so keen to avoid. For the medical profession and much of the public, that opportunity can’t come soon enough.

Sign the petition for Jeremy Hunt to explain his actions to parliament.

Support The Canary so we can keep you informed on what your government is doing.